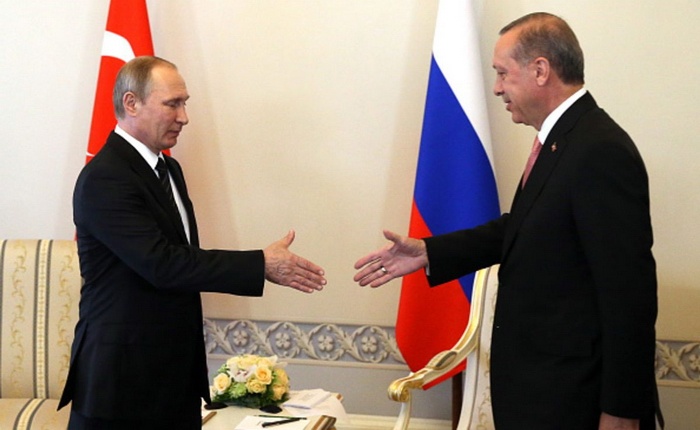 Once again Russia and Turkey are on the verge of a quarrel.

Perhaps the signs of a deepening dispute between the two countries have become numerous, especially since the recent Putin-Erdogan talks in Moscow were much worse than both leaders tried to show.

If President Putin still maintains the title of «hard nut» as described by the US President in terms of his solid stand, but Erdogan’s actions have shown that he is about to break this look.

After the meeting in the Kremlin on the tenth of March, both leaders announced in unison that the process of normalization that began in August 2016 has ended and that the relationship between the two countries has re-entered the stage of «multi-faceted development» in all fields.

However, subsequent events revealed that these statements were merely an expression of the ability of Presidents Putin and Erdogan to maintain their calm and cool nerves.

Indeed, the talks did not end with the same level of success as they did in front of the journalists’ lenses, and the dispute raged again between the presidents of the two countries, but this time because of the Syrian Kurds.

The Turkish leader and during the press conference in the Kremlin said: The elimination of a terrorist group as (Daesh) with the help of another (The Kurdish people protection unites) is not possible, according to his words.

The Turkish media later revealed that Erdogan had asked Putin to give up helping the Kurds, who were fighting alongside the Syria president Bashar Al-Assad, who will reward them by establishing of self-government in the north of Syria.

However, the Russian president rejected Erdogan’s request, as the Turkish press reported.

In addition to the differences between the two governments, it became known that representatives of the Kurdish military formations had signed an agreement with Russian specialists to train their forces on «modern warfare skills», according to information by The Kurdish people protection unites, as a result of the preparation of new fighters, where the number of Kurdish forces to reach 100 thousand fighters by the middle of 2017.

According to Reuters information, the current amount of their fighters are about 60 thousand by the end of 2016.

This information was confirmed by photographs published on social networks, which show the arrival of Russian equipment to Afrin region.

On the other hand, the Russian parliament (Duma) has stressed the need to promote the immediate dialogue between Damascus and the Kurds for the establishment of Kurdish autonomy in Syria, with «broad constitutional powers» and that «contribute to peace in the north of the country» according to the International Affairs Committee of the Russian Duma, Leonid Slutsky.

Although the Kremlin did not make any explanatory comments related to the general subject, but Ankara has evaluated the statements of some Russian politicians, and the actions of the Russian army in the north of Syria «as a stab in the Turkish back».

Where the Turkish authorities consider the Kurds as their main enemy, especially that the Turkish «Shield of the Euphrates» operation in Syria, and from the beginning were not only directed against «Daash», as announced by the Turkish leaders repeatedly.

The Turkish reaction was quick, on March 23; the Turkish Foreign Ministry summoned the Charge d’Affaires of the Russian Embassy in Ankara Sergey Banov, in this regard, it must be said that the Turkey and the Kurds are killing each other on a continuous basis, and that these cases were never used as a reason to publicly reprimand Russian diplomats.

The Turkish Foreign Ministry asked Sergey Banov to close the office of the Kurdish Democratic Union in Moscow, although the Russian side did not confirm the existence of such an office.

Of course, tension was not confined to the diplomatic line alone to reflect the dissatisfaction of the Turkish position.

Erdogan did not leave the Kremlin in his recent visit to Moscow, nor did journalists put points on the letters in their articles, which celebrate a new era in Russian-Turkish relations, when Turkey abolished ferry service between Crimean ports and Turkish ports.

Ankara also announced on the 18th of march, that it would never recognize that the Crimea being Russian, and that it was included as a result of «a gross breach of all existing international legal standards», and they will continue to support the «Turk-Tatars» of the inhabitants of the Crimea”.

Parallel to that, there was another story offensive to Russia, Erdogan did in Astana, where the participants in the third round of negotiations on the Syrian settlement waited eagerly for several days to attend the representatives of the Syrian armed opposition who was guaranteed by Ankara, like their presence in previous rounds of negotiations, but without interest.

Ankara here has not only disrupted the current negotiating process, but has in fact annulled the initiatives of President Putin, who seriously predicted that Astana could become a real alternative to Geneva.

The negotiations in the Kazakh capital have not achieved any breakthrough in the situation in Syria.

Finally, we should not ignore what has been revealed since the end of last week by the «grain scandal» as Turkey suddenly announced its refusal to buy grain from Russia (through the introduction of 130% protective drawings).

Although Russian officials have previously announced that Russia will find an alternative to Turkey, it does not seem easy on the threshold of a new season.

Turkey is second to Egypt in buying Russian grain.

So far, the Russian side is acting patiently, as if nothing has happened in the Russian-Turkish relationship, but it has become clear that any small spark in the course of the relationship between Russia and Turkey could lead to the outbreak of flame.