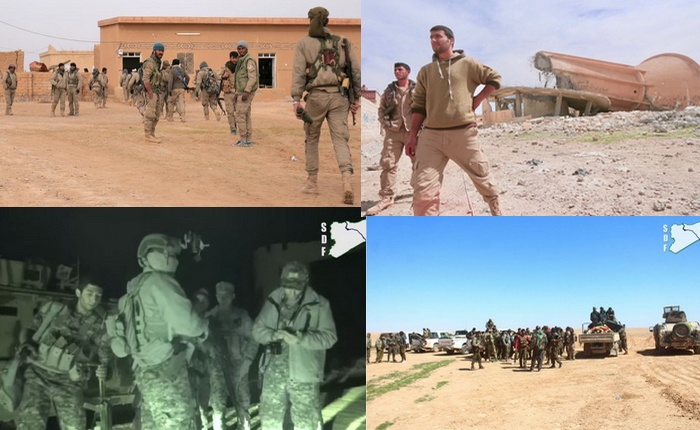 A U.S.-backed Syrian alliance of Kurdish and Arab militias on Sunday took a military airport in northern Syria held by Islamic State, close to the country’s largest dam that may be in danger of collapse.

The Syrian Democratic Forces (SDF), an alliance of Kurdish and Arab militias supported by a U.S.-led international coalition, said in a statement it had seized the air base.

Earlier, SDF spokesman Talal Silo said its fighters had seized «60 to 70 percent» of the airport but were still engaged in intense clashes with the ultra-hardline militants inside the air base and on its outskirts.

The SDF, backed by U.S. special forces in a campaign that has driven Islamic State from large swathes of northern Syria, fights separately from other rebel groups that seek to topple President Bashar Al-Assad’s rule.

The SDF has been battling the militants near the Tabqa dam and air base west of the Syrian city of Raqqa in an accelerating campaign to capture Islamic State’s stronghold.

Hundreds of families were fleeing the city of Tabqa to the relative safety of outlying areas as U.S.-led coalition air strikes intensified in the past few days, according to former residents in touch with relatives.

The UK-based Syrian Observatory for Human Rights, which monitors the war in Syria, said a week-long campaign of U.S-led strikes on Tabqa and the western countryside of Raqqa province had killed at least 90 civilians, a quarter of them children, while injuring dozens.

A media representative for the U.S.-led coalition fighting Islamic State said it was looking into the Observatory’s assertion.

Last week, the Pentagon said there were no indications a U.S.-led coalition air strike near Raqqa had hit civilians, in response to an Observatory statement that at least 33 people were killed in a strike that hit a school sheltering displaced people near the city. The Pentagon added it would carry out further investigations.

A group of civic bodies and local and tribal notables from Raqqa province warned of an impending humanitarian crisis in the city of Raqqa as a result of the escalating campaign to seize the de facto capital of the militants.

«We call for immediate efforts to save people and protect them,» the statement of the Turkey-based opposition-run Local Council of Raqqa Province said, urging the international coalition to provide safe passage to civilians and ending bombing of infrastructure in the fight against Islamic State.

The Pentagon said last Wednesday it had for the first time airdropped local ground forces behind enemy lines near Tabqa in a move aimed at retaking the major dam.

Islamic State said on its social media channels that Tabqa dam had been put out of service and all flood gates were closed. It said the dam was at risk of collapse because of air strikes and increased water levels.

Islamic State captured the Tabqa Dam, also known as the Euphrates Dam, which is about 40 km (25 miles) upstream from Raqqa and the air base, at the height of its expansion in Syria and Iraq in 2014.

The United Nations warned this year of catastrophic flooding in Syria from the Tabqa dam, which is at risk from high water levels, deliberate sabotage by Islamic State and further damage from air strikes by the U.S.-led coalition.

The director of the Syrian government’s General Authority of Euphrates Dam that formerly operated the huge project blamed U.S. strikes in the past two days for disrupting internal control systems and putting the dam out of service, and warned of growing risks that could lead to flooding and future collapses.

«Before the latest strikes by the Americans, the dam was working.

«God forbid… there could be collapses or big failures that could lead to flooding», Saleh said.

An SDF spokesman denied that coalition strikes hit the structure of the dam and said the air drop landing last week was conducted to prevent any damage to the main structure by engaging the militants away from the dam.

«The capture of the dam is being conducted slowly and carefully and this is why the liberation of the dam needs more time», Silo said, adding that militants dug inside the dam knowing they would not be hit for fear of damaging the dam.

The Syrian Observatory for Human Rights said it had also learned from its own sources that the dam had stopped functioning but that Islamic State remained in control of its main operational buildings and turbines.

The SDF has advanced a small distance along the dam from the northern bank but its progress is slow because Islamic State has heavily mined the area, the Observatory said.