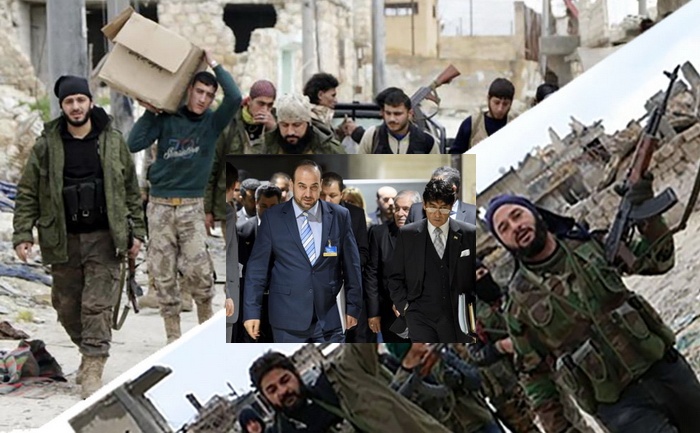 The Syrian opposition rejects terrorism and is «fed up» with banned militants but they cannot be stopped if Syria continues evicting populations of besieged areas, opposition negotiator Basma Kodmani said on Sunday.

Syria’s government has always cited the fight against terrorism to justify its part in a six-year war that has killed hundreds of thousands, and brands all its opponents and their backers as terrorists and sponsors of terror.

The opposition’s chief negotiator Nasr al-Hariri, who is trying to negotiate an end the rule of President Bashar al-Assad, began this month by saying its stance against terrorism was proven on the battlefield and not mere words.

But subsequently rebel groups launched an offensive spearheaded by suicide-bombers from the jihadi Tahrir Al-Sham alliance.

Tahrir al-Sham includes fighters who formerly belonged to the Nusra Front, once an al Qaeda affiliate and — along with Islamic State — one of the two groups in Syria designated as «terrorists» by the United Nations.

Kodmani, in Geneva for U.N.-led peace talks, said the opposition’s stance was «unambiguous condemnation, disassociation from, and willingness to fight the terrorist groups» designated by the U.N.

«The fact that Nusra or Tahrir al-Sham puts itself in those battles does not mean in any way that this is a new alliance or a renewed alliance», she told Reuters.

The militants liked to elbow their way into prominent roles but they never led an offensive on their own or maintained a ceasefire line, she said.

«We are fed up with Nusra. They are the biggest danger inside the areas where the opposition is sitting.

But if you are bombed from above, you just have to postpone the battle against extremists, even though they are a mortal danger for you.

»The day the international community gives us anything to work with, believe me, the opposition will immediately turn against all the extremists and expel them from their areas”.

Forces loyal to Assad have used the tactic of forced displacement repeatedly in the past year, especially in Aleppo, starving and bombarding besieged areas until the local fighters agree to leave in what is effectively a surrender.

The U.N. Commission of Inquiry on Syria has said such displacements are war crimes.

Kodmani said the international community was doing nothing to stop them.

«What options is the international community giving the population, for God’s sake? What can we tell people on the ground? Don’t use force? They only have force», she said.

«This is not about terror and about working with terrorists, it’s about who protects civilians».

Both Assad and the opposition hope U.S. President Donald Trump will see them as his ideal partner against terrorism.

Kodmani said there was growing understanding in the U.S. administration that working with Assad meant working with Iran-led militias that do much of the fighting for him.

«I am hoping that in the next two or three months, before the summer, we will have a clear U.S. policy that sees the obvious, which is that this country cannot be put back together if the Iran-led militias remain», she said.

«We cannot get the jihadis out, we cannot have the moderates fight the extremists, if we do not have a ceasefire and Iran-led militias included in the call for withdrawal of all foreign fighters».