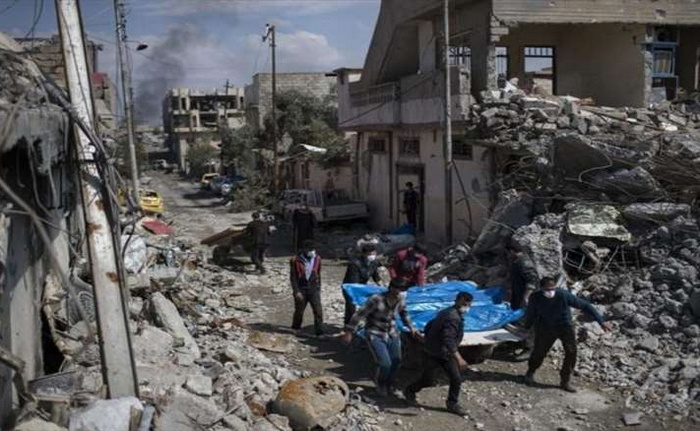 Conflicting accounts emerged on Sunday about an explosion in Iraq’s Mosul a week ago after a U.S.-led coalition strike against Islamic State that local officials say collapsed buildings, killing and burying many people.

Iraq’s military said 61 bodies had been recovered from a destroyed building that Islamic State had booby-trapped in west Mosul, but that there was no sign the building had been hit by a coalition air strike.

The military statement differed from reports by witnesses and local officials that said many more bodies were pulled from the building after a coalition strike targeted IS militants and equipment in the Jadida district.

A Nineveh province health official said on Sunday that 160 bodies had been officially buried after they were recovered from the site where eyewitnesses said buildings had been flattened by the March 17 blast.

«Six alleyways of the neighborhood were completely destroyed», the official, who asked not to be named for security reasons, told Reuters.
«Civil defense has extracted and buried 160 bodies up to this moment».

What happened on March 17 remains unclear and details are difficult to confirm as Iraqi forces battle with Islamic State to recapture the densely populated parts of the western half of Mosul, the militant group’s last stronghold in Iraq.

Eyewitnesses on Sunday described horrific scenes from the blast, with body parts strewn over rubble, residents trying desperately to pull out survivors and other people buried out of reach.

«We felt the earth shaking as if it was an earthquake, it was an air strike that targeted my street.

Dust, shattered glass and powder were the only things my wife, myself and three kids were feeling», said one Jadida resident, Abu Ayman.

«We heard screams and loud crying coming from the house next door.
After the bombing stopped, I went out with some neighbors and found that some houses on my street were leveled».

As combat continues, the Jadida incident highlights the complexity of the fighting in west Mosul, where militants hide among families, using them as shields and putting at risk as many as half a million people still caught in Islamic State-held areas.

At the north edge of Mosul, Iraqi army divisions raided and entered the Badush cement factory, to where militants had retreated, Lt. Col. Ali Jassem of the 9th armored division said.

Army units are clearing villages to the north.

Thousands of people have already fled Mosul and coalition officials and Iraq’s Shi’ite-led government are wary of incidents that could alienate residents of the mainly Sunni city and fuel the kind of sectarian tensions that helped Islamic State’s rise.

The U.S.-led coalition backing Iraqi forces on Saturday said it carried out a strike on Islamic State militants and equipment in the area of the reported deaths, and was investigating.

It did not give figures for any casualties or details of targets.

Brigadier General Matthew Isler, a deputy commanding general for the coalition, said on Sunday it took «every feasible measure to protect civilians» and was investigating all «credible allegations».

The Iraqi military command said witnesses had told troops that the building was booby-trapped and militants had forced residents inside basements to use them as shields.

IS militants had also fired on troops from houses, it said.

«A team of military experts from field commanders checked the building where the media reported that the house was completely destroyed.

All walls were booby-trapped and there is no hole that indicates an air strike», it said.

A coalition air strike had hit the area at the time though there was no sign it struck that building, it said.

The military’s casualty figure was much lower than that given by local officials.

A municipal official had said on Saturday that 240 bodies had been pulled from the rubble.

A local lawmaker and two witnesses say a coalition air strike may have targeted a large truck bomb, triggering a blast that collapsed buildings.

Ghazwan Al-Dawoodi, head of the Nineveh governorate human rights council, said his team had made a field visit and that 173 people were killed after militants forced them into a bunker, and then opened fire on gunships to prompt an air strike.

Another eyewitness Abu Obeid, a teacher, told Reuters Islamic State had parked a truck bomb in the neighborhood.

There was one huge blast then several others, he said.

When he emerged from his home after three hours, many homes were destroyed.

Iraqi forces have retaken the east of Mosul and half of the west, across the Tigris River that divides Iraq’s second city.

Thousands of people are fleeing each day to escape the fighting.

Aid groups are scrambling to build more camps to cope with the surge.

The Iraqi Observatory for Human Rights said that since the campaign against western Mosul began on Feb. 19, unconfirmed reports have said nearly 700 civilians have been killed by government and coalition air strikes or Islamic State action.

The militants have used car bombs, snipers and mortar fire to counter the offensive. They have also stationed themselves in homes belonging to Mosul residents, from which they fire at Iraqi troops, often drawing air or artillery strikes that have killed civilians.