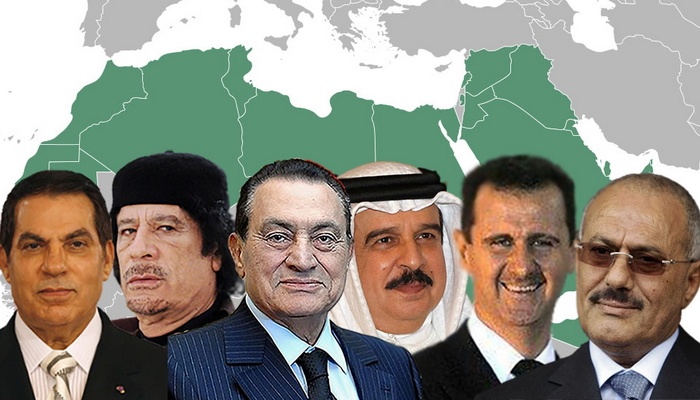 A, so called revolutions in the Arab countries took out four Arab leaders, In Tunisia, there is Zain Al-Abedine Ben Ali who is currently living in exile, and the Egyptian Hosni Mubarak, who was released after he was found not guilty, also there is the Yemeni president Ali Abdullah Saleh who was stepped down and the Libyan Muammar Gaddafi who was brutally killed during his arrest.

Only the Syrian President Bashar Al-Assad and the ruling family of Bahrain remained in power.

A Tunisian military court sentenced the former president Zain Al-Abidin Ben Ali (75 years) a life sentenced in prison for murdering demonstrators during the bloody suppression of the revolution in Tala and Kasserine in January 2011.

On the same day, another military court sentenced Ben Ali to 20 years in prison for «inciting disorder, murder and looting on Tunisian soil».

Following the protest movement in the street since December 2010, Ben Ali took refuge in Saudi Arabia on January 14, 2011 after he ruled the country for 23 years.

The Tunisian civil courts have handed down prison sentences in absentee for up to 66 years on charges of financial corruption and exploitation of power during his reign.

Saudi Arabia ignored however many requests from Tunisian official to extradite Ben Ali and his wife.

After 30 years in office, Mubarak was forced to step down on February 11, 2011, at the 18th day of a popular uprising that was violently repressed.

Since his arrest in April 2011, Mubarak spent most of his detention in the military hospital in Cairo.

He was succeeded by an Islamic President Mohamed Morsi in June 2012, who was the first president ever in the Egyptian History to be elected in multi-party elections.

The army overthrew Morsi after a year of rule, punctuated by crises and a political split.
Marshal Abdel Fattah Al-Sisi took over and become president of Egypt.

After Mubarak was sentenced to life imprisonment on charges of involvement in killing 846 demonstrators, he was acquitted by the Court of cassation on March 2, 2017.

Mubarak, who is 88 years old, returned to his villa in Heliopolis on Friday.

The Syrian President Bashar Al-Assad is still in power.

After military support for the Syrian regime by Iran, Russia and Lebanon’s Hezbollah.
Since the year of 2015 the situation in the country have turned to Assad’s favor, in the bitter war that has been taking place in the country since March 2011.

More than 320,000 people have been killed in the conflict and millions forced to flee or became refugees.

There are still an Armed group’s receiving supports by Turkey, the Gulf states and Western governments to continue the fight against Assad’s forces. However, the jihadis of the Islamic State Organization and Al-Qaeda-linked Fatah ِl-Sham (ِِِAl-Nasra) group have been overwhelmed by other armed opposition groups.

On October 20, 2011, after 42 years in power, the Libyan leader Muammar Al-Gaddafi,(69 years), was brutally killed after being captured near Sirte (360 km) east of Tripoli.

He has been a fugitive since the fall of Tripoli in late August 2011.

That was the height of the revolution in Libya, which began with protests in the eastern and second major Libyan city of Benghazi, in February.

Libya has been in a state of chaos, with two parliaments and two rival governments seeking influence, and armed factions fighting for land grabs and the country’s vast oil wealth.

Yemen: Ali Abdullah Saleh has stepped down and return to fight.

On February 27, 2012, former Yemeni President Ali Abdullah Saleh stepped down from power after a year of demonstrations and violence that left hundreds dead in exchange for immunity for him and those who close to him.

After his 33 years ruling Yemen, he gave up his powers to the Vice President Abed Rabbo Mansour Hadi, who was later elected president.

Saleh, however, retained the loyalty of a number of better-equipped Yemeni army units.
When the Huthi rebels took control of the capital Sana’a in September 2014, his loyalists did nothing to stop them.

Saleh then formed a close alliance with the rebels.

Despite military intervention by the Saudi-led coalition two years ago, the Houthis and Saleh’s supporters kept most of the northern highlands and Red Sea coast areas.

Bahrain’s ruling Sunni family faced months of protests led by the country’s majority Shi’ites in 2011 to call for constitutional monarchy and the elections for the prime minister position.

The rulers used force to quell the protests after Gulf states led by Saudi Arabia sent troops to Bahrain.

Despite repeated calls by Western allies for the Bahraini authorities to reach a settlement and implement reforms, King Hamad of Bahrain has dissolved the opposition Shi’ite Al-Wefaq and sentenced many of its leaders to long prison terms.

Other opposition groups have also been banned.