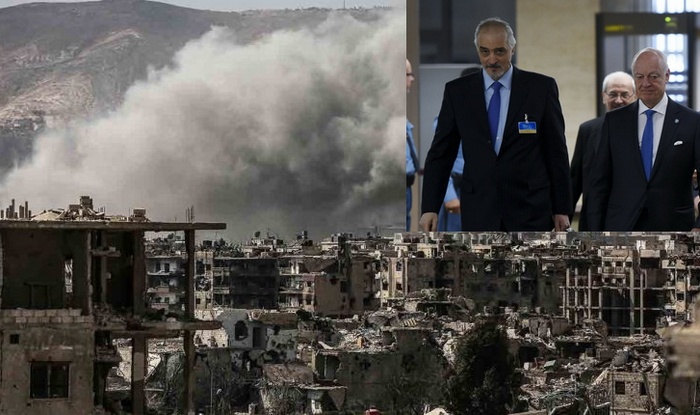 Has the Damascus attack stopped the Geneva negotiating process? De Mistura realize this fact and resign? What is the interpretation of the suspicious Russian silence? What surprises are coming in the Syrian file?

When the official data of the Syrian army confirmed, that the army has succeeded in restoring all the sites controlled by the fighters of the «Sham Liberation Organization» (formerly Nasra), and their allied factions, such as the Al-Rahman Corps, between Juber and Qabun neighborhoods in eastern Damascus, and «The attack launched by terrorist groups in the countryside of Hama», with very large number of casualties from the attackers, this raises many questions about the «Wisdom» of the attack, just few days before the start of the Geneva negotiations in its fifth edition.

If the purpose of this sudden attack on the capital is to avenge the defeat in Aleppo, and to modify the balance of military forces in the battlefields in favor of the armed opposition and their factions, and on the initiative of supporting countries such as Saudi Arabia and Qatar, according to the statements of the Syrian government and their media, In Geneva, the results were completely counterproductive, because it was in the interest of the government delegation, and gave credibility to their demands to prioritize the consideration of the item of terrorism and submit it to all three other items such as the transitional government, the Constitution and the elections.

The Syrian government emerged strong from this surprise attack, not only because it succeeded in thwarting it within few days, but also because it appeared keen to adhere to the cease-fire agreement and to consolidate it and build on it through its participation in the Astana negotiations, and to send its delegation to Geneva to emphasize its intentions, which many of their opposition doubt its seriousness, by giving priority to the political solution.

The sudden targeting of Damascus, after a period of calm for a few years, and restrict the confrontations in other cities, the Syrian government undoubtedly provoked it.

Perhaps this confusion would have been even greater if the attack had progressed rapidly, for the simple reason that the two cities that was far from engaging in the «Revolution», the first one is the capital Damascus, and the second city is Aleppo, the first city is due to the mixed population nature which was living socially in harmony, plus, the presence of the strong security authority in it, with the second city that known as the economical capital of the country, and the backbone of the civil society in the north of Syria.

Therefore, its middle class tends to settle down, and to appease the state, as one of its main pillars.

The lack of involvement of the two cities in the revolution in its early days was a source of frustration for the revolution supporting forces, and in the Gulf region in particular, which prompted it to incite the incitement of the rural and disadvantaged marginalized classes to move towards it, a trend supported by some and opposed by others.

The steadfastness of the regime and its army in the first, and the second with the Iranian support, and the Russian air cover, with Turkish collusion, strength the regime, and all the bets for its fall in the foreseeable future were failed.

In light of quick counter and stop the attack on the capital, surprised the forces that wanted to mix the papers with it, it’s difficult to expect any serious breakthrough in the current Geneva negotiations, especially as the major powers are currently occupied on other fronts, the front of Mosul and Raqqa, Iraqi forces supported on the ground by the Kurdish Peshmerga and the popular mobilization forces, backed by the US air cover, are advancing in the first, albeit slowly, under a desperate defense of their old western neighborhoods.

While all evidence suggests that the second battle, which is the Battle for Raqqa, is imminent after huge US support for the Syrian Kurdish Democratic Forces, and the tribal army Led by Mr Ahmad Al-Jarba.

The resignation of the international envoy Staffan de Mistura was expected, not because he failed in his mission, but because of the Syrian «Veto», which came on charges of inciting the armed opposition to launch military attacks.

The Geneva negotiations have lost momentum, and the process of their birth has returned or has been restored to a «summer sleep».

The choice of a new international envoy will take a long time, and in order to absorb the crisis’s rules, and mechanisms, the envoy will have to start from square one and carry out numerous reconnaissance flights.

The nature of the mission that participating delegations in the Geneva negotiations has arrived in order to accomplish it, will change dramatically in the upcoming days.

It will change from political to tourist trip; with the military solution will be above the political solution.

Also it’s not unreasonable to see a retaliatory response to the Russian/Syrian/Iranian alliance in Idlib in the upcoming days.

On the fact of blaming the factions that got involved in Damascus attack, and hold them complete responsibility of breaching the cease-fire agreement that was reached in the city of Astana.

The Russian silence on Damascus and Hama attacks, is very suspicious, and suggests a disappointment, which may crystallize in military steps in the battlefields.