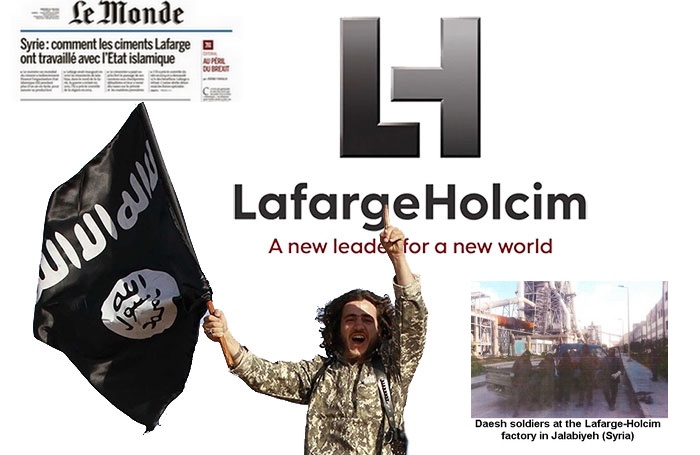 After the comments by Jean-Luc Mélenchon during the debate for the French Presidential election, we shall begin with the true story of Lafarge-Holcim in Syria.

On 2 March 2017, the company Lafarge-Holcim admitted that its Syrian subsidiary, in violation of UNO resolutions, had «paid sums of money to third parties, including certain third parties who are under sanction, in order to facilitate arrangements with a number of armed groups with a view to maintaining the company’s activity and ensuring safe passage for its employees and supplies to and from the factory».

The cement company has already been the object of two inquiries. The first was initiated by the associations Sherpa and ECCHR, on 15 November 2016, while the second was launched by the French Minister of the Economy, both were reacting to the alleged revelations in Le Monde, according to which Lafarge paid money to Daesh, in violation of UNO resolutions.

It’s important to note that the articles published on 2 March in Intelligence Online (a confidential site belonging to Le Monde) and in Le Monde itself on 22 June 2016, were written by a journalist who is not affiliated with these news outlets — Dorothée Myriam Kellou. This young woman studied at Georgetown University.

Her statements were confirmed in a book by Jacob Waerness, Risikosjef i Syra, in which the ex-employee describes the frightening security situation of Lafarge personnel in Syria.

The author pursued his collaboration with the cement company after the publication of his book.

The pseudo-revelations of Le Monde were organized in coordination with Lafarge-Holcim in order to focus the attention of the public and the judges on a single point of detail – namely, should they have accepted being held to ransom by Daesh.

The truth is worse than that.

The preparation of the war against Syria

In June 2008, NATO organized the annual meeting of the Bilderberg Group in Chantilly (United States) during which Hillary Clinton and Barack Obama presented themselves to the participants.

Among the 120 people present were Bassma Kodmani (future spokeswoman for the Syrian National Coalition) and Volker Perthes (future assistant of Jeffrey Feltman at the UNO, for Syria).

During a debate on the permanence of US foreign policy, they spoke up to commend the importance of the Muslim Brotherhood and the role they could play in the «democratization» of the Arab world.

In exchange, Lafarge allowed the Alliance to manage its installations in these two countries, notably the factory in Jalabiyeh (at the Turkish border, north of Aleppo).

For two years, the multinational supplied the materials and equipment for the construction of the gigantic underground fortifications which enabled the jihadists to defy the Syrian Arab Army.

Lafarge is currently directed by US citizen Eric Olsen, who has integrated into his company the factories of the Sawiris brothers and Firas Tlass.

The latter is the son of General Moustapha Tlass, President Hafez Al-Assad’s ex-Minister for Defense.

He is the brother of General Manas Tlass, whom France had once considered making the next Syrian President. He is also the brother of Nahed Tlass-Ojjeh, the widow of Saudi arms dealer Akram Ojjeh – she works with the journalist Franz-Olivier Giesbert.

The links between Lafarge and the French Special Forces are facilitated by the friendship between Bertrand Collomb (who became the honorary President of the multinational) and General Benoît Puga (Chief of Staff for Presidents Sarkozy and Hollande).

The lies of Le Monde

First of all, the online news outlet of the anti-Syrian mercenaries, Zaman Al-Wasl, published e-mails showing that Lafarge was paying money to Daesh.

Then Le Monde published its articles and took the documents from Zaman Al-Wasl off its Internet site
(although you can find them here on our Internet site).

According to Le Monde, the multinational was buying oil to keep its factory running. However, this is untrue – the factory in question runs almost exclusively on coal, which was still being delivered from Turkey. Without realizing the enormity of its confession, the daily admitted that Lafarge produced 2,6 million metric tonnes of cement per year, destined for the «rebel zones».

Yet throughout this terrible war, civilians could not obtain permission to build in these zones.

The construction of the jihadists’ bunkers

I’m putting the word «rebel» in quotes, because these combatants are not Syrians – they come from all over the Muslim world, including Europe.

This amount of concrete is comparable to that used by the German Reich, in 1916-17, to build the Siegfried Line.

Since July 2012, NATO – including France – have organized a war of position in conformity with the strategy described by Abou Moussab «The Syrian» in his 2004 book, Management of Savagery.

We can imagine the number of military engineers from the NATO Engineering Corps – including the French – who were necessary to build these colossal structures.

Lafarge, the Clintons and the CIA

During the 1980’s, Lafarge was defended in its Alabama pollution trial by a famous lawyer, a certain Hillary Rodham-Clinton. She managed to reduce the fine imposed by the U.S. Environmental Protection Agency down to only 1,8 million dollars.

During the mandate of George Bush Sr, Lafarge helped out the CIA by illegally transporting to Iraq the weapons which would be used later on during the rebellion, when Iraq was planned to invade Kuwait, and the international Coalition was planned to come to liberate it.

During the same period, Hillary Rodham-Clinton became an administrator for the multinational, a post she left when her husband was elected to the White House. President Bill Clinton then reduced to 600,000 dollars the fine that his wife had been unable to avoid for Lafarge.

Good relations continued between them, since the cement company donated 100,000 dollars to the Clinton Foundation in 2015, and its new CEO, Eric Olsen, never hesitates to have his photo taken with Hillary Clinton.

Entrenched in their bunkers, the jihadists were not afraid of the Syrian Arab Army, and had no difficulty in holding their positions.

For two years, the country was cut in two, since the government chose to save the population and thus to abandon the area.

When Russia stepped in, answering the request by the Syrian government, its mission was to destroy the jihadists’ bunkers with penetrating «bunker-buster» bombs.

The operation was intended to last three months, from September 2015 until the Orthodox Christmas (6 January 2016).

However, the extent of Lafarge-Holcim’s constructions proved to be so massive that the Russian Army needed six months to finish the job.

When the transnational company Lafarge-Holcim finished its mission in service of the Military Engineering Corps of NATO, it closed its factory and lent it to the Alliance.

So the factory in Jalabiyeh was transformed into a headquarters for the Special Forces of the United States, France, Norway and the United Kingdom, who were occupying the North of Syria illegally.

Contrary to the smoke-screen raised by Le Monde, this is not at all the sad story of a construction company which was forced to negotiate with jihadists in order to save its personnel.

Lafarge-Holcim’s responsibility is its central role in a vast military operation aimed at the destruction of Syria — a secret war which cost the lives of hundreds of thousands of people.