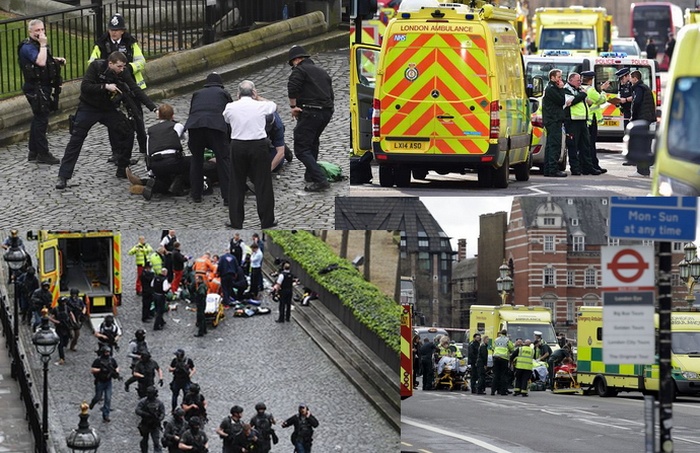 The fingerprints of Islamic State were all over the incident outside the British parliament, and more of the same can be expected

As a journalist, it is the height of good luck to find yourself, purely by coincidence, at the site of a major breaking news event.
That is what happened to me on Wednesday when the attack took place in London that resulted in four deaths and 40 injuries, some of them serious.

I had been invited to give a talk at the UK parliament about terrorism — its roots, causes, nurturing environments, practitioners, dangers and media outlets — based on my book Islamic State: The Digital Caliphate.
Suddenly, strangely attired uniformed men – the likes of which I have never seen in my 40 years in Britain: sporting masks, body armor and machine guns and resembling Ninja turtles — burst into the meeting room.

They ordered us to leave and take the stairs to the ground floor, and told us that a major terrorist
incident had occurred without providing details.
We were moved from one hall to another – MPs, former and current ministers, aides, office staff and service personnel alike – for safety.

We were kept in the building until late in the evening when the authorities could confirm that the attack was over and the lock-down that was imposed on the streets surrounding the parliament building was lifted.

We were only allowed to leave after providing our names and addresses, again, without regard for rank.
I cannot say I felt afraid or alarmed. Perhaps that is because I hail from a turbulent region and have lived through a number of wars. But I could sympathize with the feelings of fear and anxiety that overcame many of the 3,000-odd people who had been in the building during the process of evacuating them, which was remarkably smooth and orderly.
London has largely been spared any serious terrorist incidents since the July 2005 public transport bombings that were carried out by a cell affiliated to al-Qaeda and claimed the lives of 56 people.

The perpetrators declared in a videotaped message that they were taking revenge for the invasion and occupation of Iraq and the killing of one million of its citizens.
It came as no surprise that the Islamic State (IS) organization issued a statement via its Aamaq news agency claiming responsibility for the London attack.

Its fingerprints were clear on the operation from the outset, for four reasons:
First, the attack coincided with the first anniversary of last year’s Brussels bombings in which 23 people were killed, which IS announced were carried out by one of its cells.
Secondly, the running over of victims has become a hallmark of IS cells, in line with a fatwa issued by its spokesman Abu-Muhammad Al-Adnani before he was killed in a US airstrike.

He urged followers to use this tactic against members of the US-led anti-IS coalition in revenge for their assault on IS’ Iraqi stronghold of Mosul and their planned offensive against its Syrian capital Al-Raqqa.

The first and most notorious practical manifestation of this was the attack in Nice last June carried out by a Tunisian in which 84 people were killed. This was followed by the incident in Berlin in December in which another Tunisian caused 12 deaths.
Third, it has been clear for some time that in the face of huge losses on the ground in Iraq (Fallouja, Tikrit, Ramadi and much of Mosul) and Syria (Manbaj, Al-Bab, Ayn Arab (Kobani) and Palmyra, with the attack on Raqqa starting soon), IS has begun resorting to its ‘Plan B’: moving towards the escalation of terrorist attacks, especially in the West.
Fourth, IS social media sites were particularly jubilant about the London attack – even before the group announced its responsibility – and were filled with admiring praise for the skill and courage of the perpetrator?
IS has three main options in the forthcoming period: to step up terrorist actions to compensate for the geographical shrinkage of its state; to focus on spreading its views as widely as possible as the ideology for the long-term revival of the Islamic caliphate; and/or to relocate to lawless or failed states (such as Libya, Yemen, Somalia or the African Sahel) to make up for the loss of its heartlands in Iraq and Syria, if only temporarily pending its eventual return.

Such a comeback should not be ruled out.
The current anti-IS coalition is likely to unravel once Mosul and Raqqa are recovered due to fundamental disputes between its members – over the Kurds’ aspiration for independence, for example, or the Kurdish takeover of Kirkuk, the failure to achieve national reconciliation, and the continued stoking of sectarianism on both sides of the confessional divide in Iraq.
The choice of London, and the precincts of the parliament that is the oldest bastion of Western democracy, as target of this attack was no coincidence.

The British capital is of special political importance because of its history and location, and above all its media visibility.

The perpetrators and planners of this operation wanted it to dominate the news headlines worldwide, and there is nowhere better than London to achieve that.

It must be reiterated that with IS poised to lose most if not all the territory it controls, it will become more ruthless and dangerous as it reverts to the original strategy of its parent organization al-Qaeda — terrorist attacks -– and is freed of the costly burden of running a state and meeting the needs of its ‘citizens’.
The forthcoming stage could witness both rivalry and cooperation between the world’s two most dangerous Islamist terrorist groups, Al-Qaeda and IS.

The former is on the ascendant, particularly in Yemen and the Arabian Peninsula, and has a young new leadership.

The latter is in decline in territorial terms, but this will make it more determined to exact revenge against the enemies attacking it by means of terrorist actions.

Terrorism can be expected to make a powerful comeback in the months and possibly years to come.

Its causes and nurturing environments are still there, as are the vindictive conflicts, sectarian divisions and bloody lawlessness in which it thrives.

Indeed, these are likely to worsen in the absence of any real plans to overcome them and offer an attractive alternative model in the aftermath of the recovery of Mosul and Raqqa.