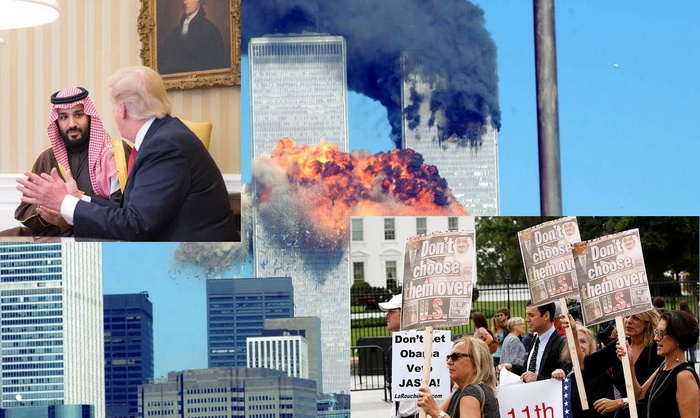 A lawsuit on behalf of victims of Al Qaeda attacks, an introduction to dozens of other on the road.
Can Trump the «friend» stopped? And how much the compensations will be?

Two days after the conclusion of a visit, that billed as a historical one of the Saudi Prince Mohamed Bin Salman, the second Crown prince, to the United States and his meeting with the US administration officials, led by Donald Trump, a group of 800 people from relatives of victims of the September 11 attacks, filed a lawsuit in a Federal Court in Manhattan (New York) against Saudi Arabia on charges of financing Al-Qaeda and demanded a huge financial compensations for the damages that they suffered.

Prosecution document made by a major law firm on behalf of the families of the victims, was 135 pages, accused charities and Saudi governmental authorities, accused them of «making connections and ties with Al-Qaeda leader Osama bin Laden, with the Saudi government previously knowing that, three of the planes hijackers were Al-Qaeda members».

The most dangerous paragraph in this document says that, «the Saudi Arabia has two sides, one side when presented themselves publicly to the United States and the West as a country that fight Al-Qaeda and the terrorism, while the other side of them, as detailed in the document, providing significant financial support for Al-Qaeda by Saudi officials.

This lawsuit is the first in a series of subsequent issues come under the Bill passed by both houses of Congress, senators and representatives, overwhelmingly, under the name of „Justice Against Sponsors of Terrorism Act“ or „JASTA“, based on the FBI investigation manuals, most notably among these investigations is the Support of Saudi officials at the Saudi Embassy in Germany for the Leader of the Attacks Mohamed Atta, and financing his colleagues for the attacks by also a Saudi officials at the Saudi Embassy in Washington, especially Salem Al-Hazmi, Khalid Al-Mihdhar, who participated in the operation.

The current impression in KSA is that, the Saudi government has contracted with more than a dozen of public relations firms, monitor tens of millions of dollars in this respect, as well as a complete devoted time for the current Foreign Minister and former Ambassador to Washington, Mr. Adel Al-Jubeir, for two months to make contact with members of Congress, hoping to explain the Saudi point of view, and the arrival of Donald Trump to the White House, all these elements succeeded in disrupting this law, or create some necessary groundwork for amendments, but this lawsuit proved that all these efforts failed until now, at least.

The Judicial authority in the West in General, and the United States in particular, enjoys full independence from political counterpart, this independence has demonstrated very clearly when it defied President Trump, and revoked twice his decrees to prevent citizens from seven Muslim countries from visiting the United States, the original and amended decrees.

In America, and many European countries, there is great, firms specializes in litigation before the courts on behalf of „victims“, based on the rule of law that says (no gain for the case and no fees).
No Win, No Fees, which means that, they will get paid after winning the case and obtains damages from the defendant, and surely the firm of „krendler & krendler“ which is one giant firm that follow this rule, because most victims do not have the financial means to afford a case of this magnitude, that it costs reaches several million of US dollars.

The law firm company didn’t specify any cap on the amounts claimed as compensation for their clients, but sufficient to indicate that New York State alone estimated material losses resulting from the destruction of the World Trade Center and other buildings, and business interests that were damaged, with about 100 billion of US dollars, and there are unofficial estimations confirms that the total volume of damages could reach four trillion dollars, if it’s not more.

We don’t know if Prince Mohamed Bin Salman discussed this issue with President Trump when he met him at the White House, the meeting that was described in the Saudi media as „historical“ which is put the foundations for strategic relationship, but we know that Trump has no legal ability to interfere in the judicial affairs of America, just as the inability of British Prime Minister Tony Blair, and the failed of his predecessor John major, when the fail to deport any of the Saudi dissidents, Saad Al-Faqih and Mohamed Al-Massaari, by Saudi request that was attached with a threat to cancel the infamous „Yamamah“ weapons deal, that was valued at that time of about $70 billion.

Saudi Arabia currently stands at the gates of a Great double financial blackmail operation, the first one is from President Trump who wanted to fund reconstruction projects in the US infrastructure, or part of it, for the Saudi Arabia enjoy the US protection umbrella, that enjoyed for decades, and the second one is the American judicial institution, in the form of huge financial compensations.

This is the result of the so called strategic alliance with the United States, that been lasting for an eighty years at least, during which each Kingdom fought wars of America, including in Iraq and Libya, Syria and Yemen, and against communism in Afghanistan, for nothing. With such ((friends)), who needs enemies.

Of where the KSA will pay all these bills under the hollowness budget, with most of financial reserves evaporated, and low oil prices, and a war of attrition in Yemen and Syria?