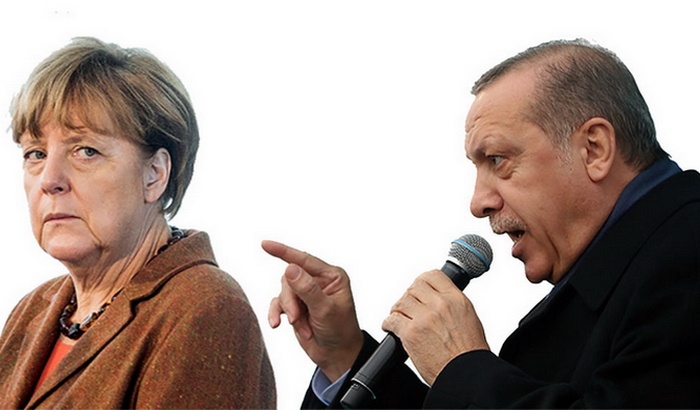 Berlin is growing increasingly frustrated about Turkish President Tayyip Erdogan repeatedly accusing it of applying «Nazi methods» by banning rallies aimed at drumming up support among Turks in Germany for a referendum that would strengthen the power of his presidency.

«My demand that Turkey should stop Nazi comparisons remains in force, with no ifs or buts,» Merkel told reporters at the CeBIT technology fair in Hanover.

«Unfortunately, we have observed that these comparisons have not stopped, and we will not tolerate that every taboo is broken».

Ties between Turkey, Germany and other European countries have deteriorated in recent weeks amid growing tensions over the April referendum vote and concern over an increasingly authoritarian tone from Ankara.

Turkish Deputy Prime Minister Numan Kurtulmus on Monday said Turkey was using metaphors about «facism» because it was worried about European countries forgetting their history and falling into the trap of Nazism once again.

Merkel said the German foreign ministry had warned Ankara in an «unambiguous» diplomatic communication, or «note verbale», in recent days that Turkish politicians could speak in Germany only if they complied with the country’s law, which explicitly bans malicious disparagement of the German government.

If laws are violated, «the German government reserves the right to take all necessary measures, including a re-examination of all appearances approved as part of the diplomatic communication», she said.

Merkel’s spokeswoman told a regular government news conference that «Nazi comparisons are unacceptable in any form», adding that it was up to Turkey to tone down its rhetoric and avert damage to relations between the two countries.

Erdogan had said in a speech in Istanbul on Sunday: «Merkel, now you’re applying Nazi methods. Against my brothers who live in Germany, and against my ministers and lawmakers who visit there. Would this suit the ethics of politics? Your mission is not to support terrorist organizations, but to extradite them».

Josef Schuster, president of the Central Council of Jews in Germany, said Turkey’s Nazi comparisons demeaned the memory of those who perished in the Holocaust and distracted from the real threat of growing anti-Semitism and right-wing populism.

«The comparisons between the Federal Republic of Germany and National Socialism… are not only insulting and absolutely wrong, they also diminish the reign of terror of the Nazis», he said in a statement.

German Foreign Minister Sigmar Gabriel said he worried that the conflict would spill over to ties between citizens of German and Turkish descent.

«We belong together. We are one people», he said at an event in Berlin.

German lawmakers from across the political spectrum also voiced concern about reports that Turkish consulates had confiscated passports of Turks in Germany.

Stephan Mayer, a member of Merkel’s conservatives, said it was «not acceptable» for Turkey to pressure its citizens through such measures, and a clear reaction was needed from Berlin.

«That is not the way a democratic government treats its citizens», he said.