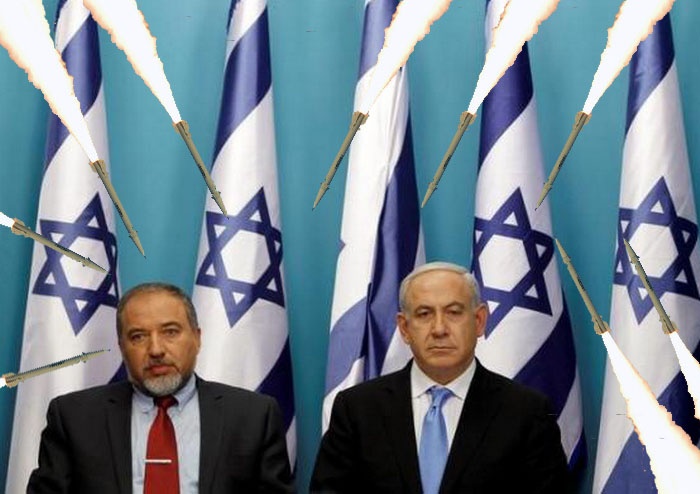 Lieberman and Netanyahu’s threats reflect the confusion and aridity, and Russian foreign ministry calling on the Ambassador of Tel Aviv as warning of anger, and an Iranian base in Tartus, Russian base to support Haftar in western Egypt, a strategic change for the game rules.

The Syrian missiles respond on four Israeli planes that strike near the city of Palmyra, and for the first time in years, shuffled the cards and changed the military and strategic equations in the region partially, proven new facts on the ground.

There are several key points can be learned by reading the Arabic, Israeli and international reactions, which was developed after this sudden and unexpected missile reaction:

I: The Israeli military command are living double condition of fear and anxiety, by this bold seemingly Syrian military which is not seams to be spontaneous, but carefully calculated, and an introduction to other steps.

II: The Syrian missiles respond, is not however a command decision that was made in Damascus alone, but a decision made by the «Axis» comprising Russia and Iran besides Hezbollah, and possibly also Iraq, because the Syrian leadership could not done such thing, that has serious consequences, including a regional war in the area without coordination with their allies, and their consent early in advance, within the framework of an agreed strategy.

III: Summoning the Israeli Ambassador in Moscow by the Russian foreign ministry, and for the first time in the history of relations between the two countries which it didn’t happened before, came not only to express their (Russia’s) sense of anger and anxiety, and their desire to put an end to this Israeli rampage in Syria, which Russia, considers its military influence zone.

IV: The successes on fields that been achieved by the Syrian army in recent months, with Iranian, Russian and Hezbollah support, to restore both Aleppo and Palmyra, Al-Waar neighborhood in Homs, so now all are under the Syrian government control, these successes gave them confidence, and gave support a big dose of hope.

V: We are on the verge of mounting military degradation on Syrian territory, after the Syrian response achieved a great step towards the «Deter″ partially or entirely on this front, and the Israeli State, confined in a tight corner, their options are limited, and so dangerous at the same time.

The Israeli Defense Minister, Avigdor Lieberman’s remarks, that he made on Israel Radio last Sunday, which vowed, that Israel air force will destroy all the Syrian air defense systems if the Syrian army fired missiles again toward the Israeli aircraft, and his boss Benjamin Netanyahu, shared he’s threats and he launched them also, which is reflect the real Israeli dilemma, up on a high tree in which cannot stay on it for long, because moving and transferring weapons and missiles and advanced military hardware to „Hezbollah“ will not stop and any attempt to bomb the convoys will get a missiles respond, both toward the striking planes or inside Israel, because the last Syrian reaction will not be a one time act, otherwise they wouldn’t go for it, and next time, if they didn’t respond, it will damage morals and cause significant damage, politically and militarily for the Syrian leadership and the Israelis know this fact very well.

»Hezbollah” today is no longer exists only Lebanon, but throughout whole Syria, and fixed and mobile bases which are stationed or movable all together, and surrounds the occupation state, from the north of Lebanon through the southern of Syria, and its unlikely that they already reinforced by very advanced missiles, and the most important fact that, the Lebanese army, under the Presidency of General Michel Aoun, would be an ally in any upcoming confrontation, or any future Israeli aggression, because he’s a major supporter of the resistance and the Lebanese Army doctrine had changed, and it fill in this option.

Syria is the only Arabic country that still a confrontation state, in case of war with Israel, after Egypt and Jordan signed peace treaties with Tel Aviv and Syrian is backed by Iran and Hezbollah, and enjoy a strong Russian umbrella, there are reports confirming that Iran has set up a naval base in Tartus, and Hezbollah now possesses missiles factories in Lebanon, I’m not surprised if the coalition «Huthi/Salhi» in Yemen possess such factories, even «Hamas» movement in Gaza Strip too, so, why does Hezbollah doesn’t possess his own factories?

The Russian Middle East Alliance is expanding, and the reports that confirmed that Moscow sent commando units to bases in western Egypt to assist General Hafter (the Egyptian denies wasn’t convincing), and its vessels have facilities freely in the west, Libyan and Egyptian ports too, and all these developments underscore that this Alliance is at the up level.

The past six years Russia, had proved that they doesn’t disappoint its allies, when the Syrian leadership has appealed for help two years ago, Russia had strongly intervened and prevented the fall of the regime, and when the Libyan General Hafter called for support, Russia responded to the call to get vengeance from the Americans who deceived Russia in Libya, with fact that, Russia will not stand idle in the face of any new Israeli attack on Syria, which has become a major Russian military focal point in the Middle East.

The reign of of the Israeli arrogance maybe is coming to an end, and the last air strick near Palmyra actually may be the last, unless the Israeli leadership wanted to ignite a war lead to the precipitation of hundreds of thousands of missiles over their heads and their settlers from Naqoura to Eilat, from North, South and East as well.

Because, Palestine has been and will continue to be the compass of dignity and gallantry, and the real test of courage and patriotism, and stronger common of all Arabic and Islamic Nations, because it’s the cause of honor, that concludes and transient all of denominations, ethnicity and borders.

And the days are between us.