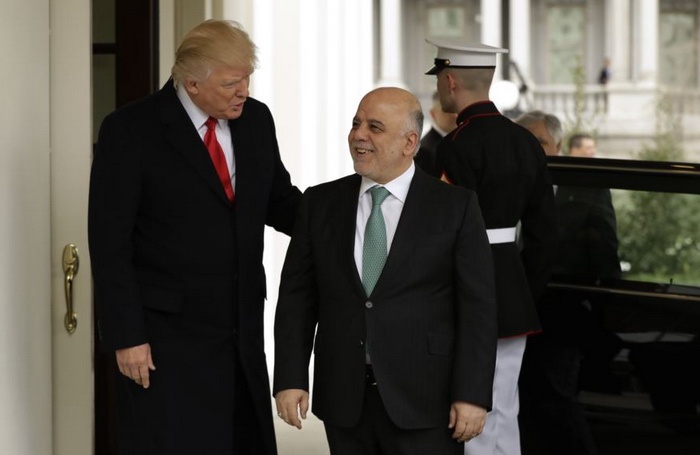 Iraqi Prime Minister Haider al-Abadi said he won assurances of greater U.S. support in fighting Islamic State militants in talks on Monday with President Donald Trump and top advisers, but cautioned that military might alone would not be sufficient.

Abadi’s remarks followed his first face-to-face meeting at the White House with Trump, who took office on Jan. 20 pledging a new strategy to defeat the hardline militant group that seized large swaths of Iraq and Syria in 2014.

Even before Trump took office, Iraqi forces recaptured a string of major cities from Islamic State, shrank the militant group’s finances and significantly stemmed the flow of foreign fighters, all with the support of U.S.-led coalition air strikes and military advisers.

«I think they’re prepared to do more to fight terrorism and be more engaged», Abadi told a forum in Washington hours after his meeting with Trump, adding he had been told U.S. «support will not only continue but will accelerate».

«But of course we have to be careful here», Abadi said. «We are not talking about military confrontation as such.
Committing troops is one thing, while fighting terrorism is another thing».

Abadi, who leads the Shi’ite majority government in Baghdad, said it would be crucial to win over the local population in Sunni-dominated Mosul to achieve lasting peace.

A White House statement about the meeting said both Trump and Abadi agreed that «terrorism cannot be defeated by military might alone», and the two leaders called for deepening commercial ties, including in the energy sector.

At the forum, Abadi called for more financial contributions from the international community.

«We (would) love to see more funds so that we can quickly (regain) prosperity and stabilization in these areas», he said.

Abadi spoke as Iraqi forces made steady progress in seizing back Mosul, Iraq’s second largest city, from Islamic State, which officials expect will become a more classic insurgency once it loses its last major strongholds.

In a sign of the threat, a car bomb killed at least 23 people and wounded more than 45 in a mainly Shi’ite southern district, police and medical sources said.

There was no claim of responsibility, but Islamic State has carried out similar attacks in Baghdad and other cities as its hold on Mosul weakens.

Earlier in the day, as the two men met, Trump told Abadi that he knew his forces were fighting hard.

I know Mosul is moving along.… We will figure something out.

Asked whether he had seen the Trump administration’s plan to wipe out Islamic State, Abadi said: «I haven’t seen a full plan. I know there is a plan. I haven’t seen it».

Abadi is in Washington this week ahead of a gathering of world leaders of a coalition fighting Islamic State.

In many ways, his visit comes at a high point for him after successfully appealing to Trump to remove Iraq from a list of countries included in a revamped travel ban.

Trump decided this month’s revised order temporarily banning the entry of travelers from several Muslim-majority nations would not include Iraq because of its cooperation with the United States.

Both the initial Jan. 27 travel ban and the revised version have been blocked by federal courts.

Detractors argue the ban discriminated against Muslims in violation of the U.S. Constitution’s guarantee of religious freedom. Trump says the measure is necessary for national security to protect the country from terrorist attacks.

«I thank you for removing Iraq from the presidential order… this was a positive response to the Iraqi request that betters the relationship with Iraq and the value of Iraq as far as Iraqi-American relations», Abadi told Trump.