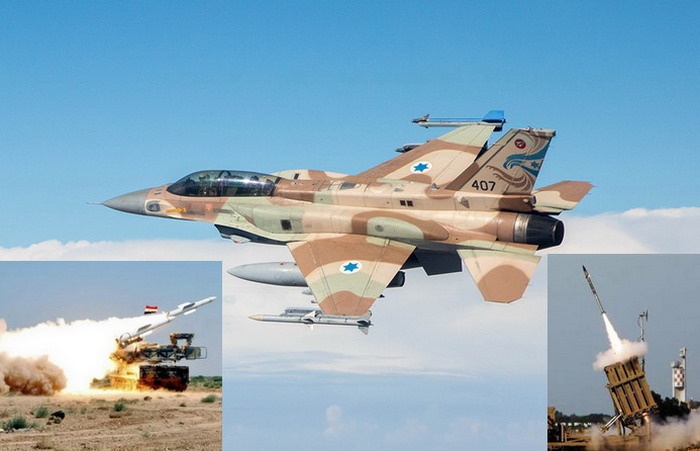 And sirens «singing″ in the Jordan Valley settlements and Jerusalem. Is it the end of an era and the beginning of another that bring back to the minds who’s the enemy, who’s the friend? And is the era of Israel’s arrogance reign ends, if its not ended already? What one of Jerusalem’s native told us commenting?

Tripping sirens in occupied East Jerusalem and the Jordan River Al-Aghwar settlements before dawn, followed by loud explosions caused by rockets that been launched from Syria, this surprise has heartened and encouraged many, and gave many others a unexpected psychological shock, we’re not talking just about Israelis, but about Arabs and Muslims as well.

the Occupation state of Israel had airs-tricked several times deep into the Syrian territory over the past years, under several pretexts, notably Syrian and Iranian weapons convoys hit include long range missiles and military equipment to the Lebanese „Hezbollah“, and they always return back to their bases safely without any responds, then, a severe „gloating“ campaign lunched on Syria and their Arab Army, with accusations „cowardice“, with repeating that despicable line of „they’ll respond in the appropriate time and place“, as a confirmation on they irony, and implicit tribute for the foe Israel and its planes.

Today the picture is differed, because the Syrian air defenses responded to four attacking Israeli warplanes and shot down one of them and hit another, according to the statement issued by the Syrian Arab Army, and other ground missiles that reached the occupied Jerusalem and the Jordan River Valley, and with that being said, it shows that the respond wasn’t only against the striking planes, but also on other targets on the ground, otherwise why the sirens was tripped in the heart of Israel?

there are some whom are at the same line with Israel, may argue, that Tel Aviv has denied any shot down of its aircraft, so, let it. The event is to address these aircraft, and willingness to take this step results, meaning that they contain political and military stakeholders of the occupying power or its allies, the Arabs and the Americans together.

This development, which is addressing the Israeli aircraft, which occurs for the first time in six years, maybe more, cannot be a coincidence, but thoughtfully and carefully, but under the new Syrian military strategy reflects the end of a phase and the beginning of another, it explains more sayings of an Israeli military analyst stresses that his government did not want an escalation because it’s not in their interest, „o mighty god“ they are air striking for six years now and violated, in a „Deliberate provocation“ to any Syrian respond, and now they say they don’t want escalation?

Its certain, that the Syrian leadership decided to confront any Israeli aggression and at the same time it was ready to assume all the results and go beyond it, by and with a very careful plan, it seems clear that the Israelis took this message quickly, and acknowledged for the first time the air strike on Syrian territory, and they unleashed the sirens in anticipation of the worst, and they shockingly silenced as if birds on their heads.

The Syrian missiles, according to Israeli military analysts, with most of them a retired generals, confirmed that, it’s very advanced, which forced the Israeli military command to tackle them with rockets „Arrow″, the most advanced in their military arsenal, however its only managed to intercept only one, according to Israeli press reports, what would it be like if the rockets that’s will be used next time S300 or S400?

The official statement of the Syrian army that said “This blatant assault comes as indulging by the Zionist enemy in supporting Daesh terrorist gangs and a desperate attempt to raise their collapsed morale and jamming victories of the Syrian Arab army in the face of terrorist organizations», this statement did not mention info, regarding the type of these missiles but they wanted to suggest that this airstrike that targeted a military center near Palmyra, comes as an intervention in the Syrian crisis, to benefit of these organizations.

I don’t believe that the Syrian leadership will go for such a strategic decision of such importance in addressing Israeli planes without prior coordination with Russian and Iranian allies, and getting green light to respond forcefully, and it was like if those allies want to send a direct warning message to Benjamin Netanyahu, the Israeli Prime Minister, who was guest of President Vladimir Putin, to express concerns about the Iranian presence in Syria and demanding to put an end to it.

The letter says in very clearest terms, its your revelry that is not acceptable, and that the Syrian airspace that you were addicted to disorientate in the previous years, is the greatest risk that must be addressed, and to prevent any recurrence.

The Syrian response came strong and surprising, and at a time when the point of views matched between the US president Donald Trump and his guest, Prince Mohamed Bin Salman bin Abdul Aziz, the second Crown prince, about the need to address the Iranian threat, which will mix all the papers on the table, and mark a new phase of military escalation before political, We’ll not be surprised that these Syrian step is in fact replying on this point of views match, and its repressive plans.

The Syrian army after six years of fierce fighting is still intact, strong, solid, and most importantly, never get lost the compass for his road which was, and remains, the Israeli occupation as the greatest enemy of the nation and it’s belief.

One of the native population sons of Jerusalem, talked to us by phone commenting on the sounds of sirens that set off at dawn. «It’s the most beautiful melody of music I’ve heard since 1967.

We’re totally understand this feeling from one of a nation’s sons, who is had enough of insults, humiliation and Israeli excesses and subservient Arab official.

We received information from sources, that we trust, that what we see is the beginning of the beginning and what is coming will be far more great, and there are surprises are coming, with these lean years are coming to an end.