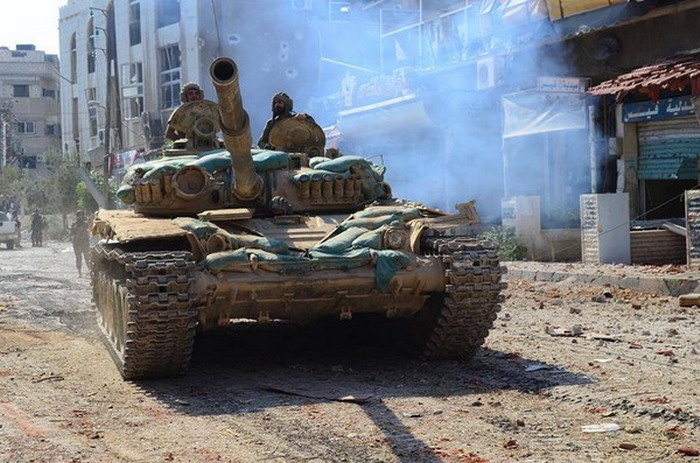 Syrian rebels launched a major offensive on Sunday that brought them close to the heart of the Old City of Damascus, and government forces responded with intense bombardments of rebel-held areas.

The escalation, reported by witnesses, state TV, rebel sources, and a monitoring group, marked a bid by the rebels to relieve army pressure on besieged areas they control to the east of the capital.

Moderate Free Syrian Army (FSA) and jihadist groups were both involved in the assault on the districts of Jobar and Abbasiyin, some 2 km (1.2 miles) east of the Old City walls.

Syrian state television said the army had repelled an infiltration attempts by the militants and bombarded them with artillery, inflicting heavy losses.

Witnesses said the army deployed tanks in some adjacent neighborhoods, and troops could be seen patrolling on foot.

«The streets are empty and the army has despatched dozens of troops in the streets, and tanks are being moved. The sounds of mortars from Jobar have not stopped», said a resident of the nearby Tijara district, who asked not to be named.

Another witness said most shops had closed in areas close to the fighting, as people fled further away from the clashes.

Heavy explosions rang out in the background as state TV broadcast live from Abbasiyin square, a usually teeming area that seemed to be deserted of traffic and pedestrians.

With the recapture of the city of Aleppo last December, President Bashar Al-Assad’s army reinforced its dominant position across most of the country. Since then it has been trying to break down rebel resistance in Damascus and reassert full control of the capital after six years of war.

The army and its militias have for months been targeting Eastern Ghouta, the biggest remaining rebel bastion near Damascus, while making only incremental gains.

Rebel sources said their attack on parts of Jobar, which they held for a time in 2013, was in response to their loss of ground in Qaboun and Barza, two other districts to the north.

«This is to relieve the pressure on rebels, with the regime not stopping its bombardment and artillery shelling on our people», Abu Abdo, a commander from rebel group Failaq Al Rahman said via internet messaging, adding that the aim was to link up Jobar with Qaboun.

He said the rebel operation had included two suicide bombings launched by Tahrir Al Sham, a coalition of jihadist groups whose backbone is the former Al Qaeda affiliate Nusra Front.

The UK-based Syrian Observatory for Human Rights, which monitors the war, said rebels had captured several industrial sites and buildings between Jobar and Qaboun after launching their surprise attack.
An official of Ahrar Al-Sham rebel group said the

capture of large swathes of the industrial area that has long been an army line of defense for the capital could help a bid to push deeper into the heart of the capital in coming days.

Another rebel fighter acknowledged army advances in the last two days toward a major road between Qaboun and Barza had been a big blow.

The capture of that road would sever the link between the two besieged rebel districts, where tens of thousands of people live and would force the hands of rebels to agree to deals worked out elsewhere that force them to pull back to northern Syria.

The deals are viewed by rebels as forcibly displacing people who oppose Assad after years of bombardment and siege.

«Taking this road would isolate Barza and Qaboun completely and with a security belt around it», said Abu Abdullah, another fighter with Failaq Al Rahman.

Rebels said several factions in Eastern Ghouta, including the dominant Jaish Al-Islam group, were sending reinforcements to Jobar to help rebels maintain the momentum of the assault.