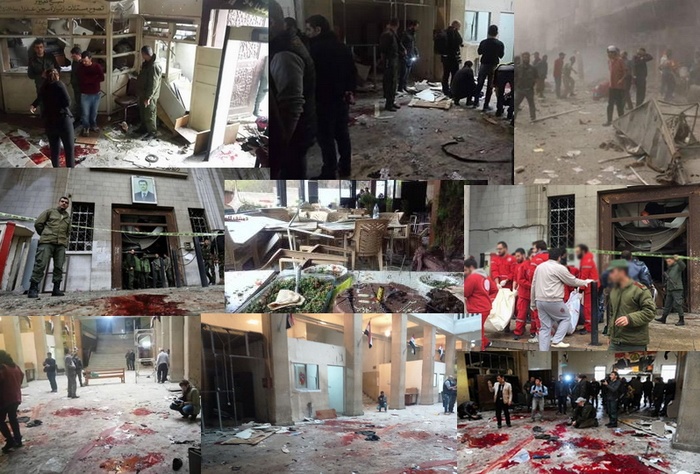 The two suicide Damascus attacks will justify provide cover and pretext for full deadly attack to regain Idlib and its all around area, eliminating radical Salafist groups in? Why the loss of opposition far more than the loss of the regime?

What we’re positive about is, that the overwhelming majority of Syrians didn’t expect after six years on «the revolution», that the situation in their country would be that bad as it is now from the bloodshed and displacement of half the people, and the destruction of most of the major cities, and above all that is the fact that the regime did survive and still rules.

The Syrian people suffered a great deception when some Arab and Western countries branded him false scenarios of communal working used misleading as a provocation and tearing and exclusion, and pumped billions of dollars and thousands of tons of weapons and military equipment to the real goal, which is dismantling Syria, and turn it into a failed State and resolve its Army who fought four wars against the Israeli project, just like what happened to Iraq and Libya and Yemen.

We do not absolve the regime from any mistakes, and Syrian President Bashar Al-Assad acknowledged some, and he bears responsibility for some repressive practices, the killing of Syrians was, Mrs. Shaaban, his adviser at the beginning of the crisis, that her Government’s intention to introduce radical political reforms, including a new Constitution and free elections, respect for human rights and freedoms, ending the one-party State, but the plot was stronger than all of the great powers was standing behind it, led by the United States, and assisting regional countries who have money, a lots of it, and they thought that the task, thinking that it will be easy and quick.

Ironically, most of the armed opposition, had never recognized their mistakes, and claimed responsibility for the killing of any Syrian, and never took reviews whether it political or military, like if they are errors free, which they claimed from day one that, they fire on the revolution to eliminate dictatorship, and establish a transparent democratic alternative.

The explosions that rocked Damascus today, (March 15-2017), targeting the Justice palace killing 32 and 100 injured), or a restaurant in Al-Rabwah Area that injured 25 people, and coincided with the entry of «the revolution» seventh year, will remind millions of Syrians of the tragic end of their country’s conditions, with the setback of their hopes to a nearby access to safety, stability and end the bloodshed.

Its hard to say, that these explosions will fall the regime, or it would’ve succeed in Iraq, but it certainly will be a very serious message to the Syrians, that its vocabularies says, that the security and stability are still far away, and the bloodshed continues, but by a «quality» terrorist operations targeting civilians, mainly along the lines of what it happened and happening in Iraq.

the people who their bodies was ruptured with explosives belt, which the suicide bomber was wearing, weren’t Syrian army soldiers, nor members of the repressive security apparatus, but citizens who went to the Palace of Justice to pursue their dealings, legal issues, including judges, lawyers, too, and the overwhelming majority of them from Sunni sectarian, we do apologize in advance for using this expression of abhorrence sectarian, but we had to use it to respond on the communal project owners, which some wants it to Syria, and fiercely fights for it.

Who’s behind these bombings, wants to move the bloodshed pools to the capital Damascus, to destabilize and shook the confidence of the regime, and to compensate the loss of Aleppo, egged on by regional and international powers, whom are feel the bitterness of the defeat of their project which is centered on targeting the regime and drain the Syrian army to capsize on his leadership.

The Syrian authorities who they kept the capital safe, an oasis of stability around flamed Syrian, will inevitably going to be upset by these explosions, especially because it has significantly increased in the past few days, and this is to be expected from any government in its place, that works to maintain security in the capital at the head of its top priorities.

What they don’t realize is that those who support these bombings, and celebrating the fall of innocent victims, it may backfire completely, because they deprive them, somehow, from strong card they used effectively, great effect, against the regime and his barrels of explosive that used to harvest innocent lives over the years formed the main nerve in their media campaigns, by that they are now, just like the regime, and they use and follows methods which they used to condemn, and turn them out, with our, recognizing the differences in comparison.

These explosions probably will provide the required cover for the bloody attack which is now imminent upon Idlib city, where the factions and organizations that stand or sympathizes with these bombings gathers, and the «Sham liberation body» or formerly known as «Al-Nusra front», which claimed responsibility of the attack on Iraqi Shiites visitors of the neighborhoods of old Damascus, killing 75 of them, and injured 200 others.

the countries that instigated to transfer the battle to the secure Syrian regions, through suicide operations, tied up its powerful media machine in this particular, will face one day day charges of terrorism, and will pay for these positions from its closets or its security and stability as well, and we have to remember the «JASTA» act to prosecute sponsors of terrorism, had released after 15 years from 8/11 attacks.

Syria started approaching a political solution, and a comprehensive ceasefire and final injection of bloodshed, by strong regional and international guarantees, but who stand behind the tumult in Syria and Iraq and Libya and Yemen, don’t want that solution, as they also opposing any dialogue between the Syrians themselves, so they resorted to these suicide attacks, and supported their owners, and blocked the armed opposition representatives to went to Astana in its last negotiations round.

The Syrian people, who half was displaced and lost about 350, 000 of its finest sons, now is crying of the destruction of his cites and his national unity and we don’t think that he would support such bloody attacks, whatever his cult or gilded is, and he looks forward to a quick end to the crisis, and to achieve national reconciliation on the ground of Justice, democracy, equality and good governance, and bring better coexistence and tolerance away from marginalization and exclusion, because this people draw lessons from six bloody years, and he can distinguish between the enemy and the brother, and he’s now realizes and aware of the dimensions of the conspiracy which targeted his country, and drove it to what it looks like right now, from killing and destruction.

The current and previous bombings in Damascus, and perhaps also the upcoming ones, will constitute a major turning point in the Syrian crisis, and warning alarm to the people and the Syrian government and the opposition as well, to realize its consequences that would come by on the foreseeable future.

And the days between us.