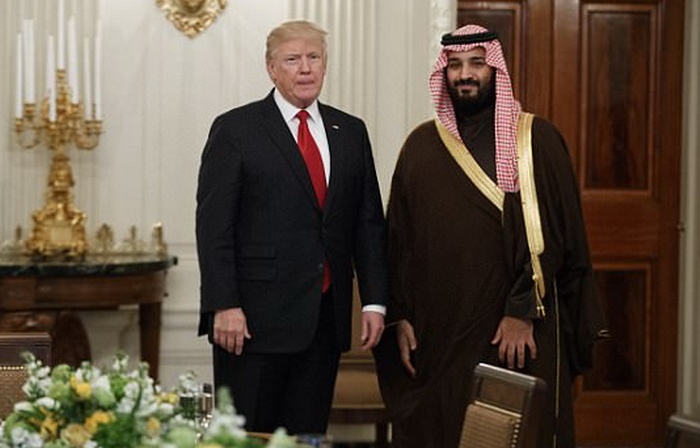 We have not been told why US President Donald Trump decided to bring forward his scheduled meeting with Saudi Deputy Crown and Defense Minister Prince Muhammad Bin-Salman from Thursday to Tuesday and invite him to a formal lunch.

But it can be inferred from the special welcome and presidential-style reception accorded to the young Saudi guest that the US – or at least the current administration – may be endorsing him as Saudi Arabia’s future monarch and adopting him as Washington’s principal strong-man in the Gulf and possibly the wider Arab world.
No details have yet been revealed of the meeting, though an aide to Bin-Salman described it as ‘a historical turning point in relations between both countries’.

These had ‘passed through a period of divergence of views on many issues’, he explained, ‘but the meeting today restored issues to their right path and form a big change in relations between both countries in political, military, security and economic issues’.
Trump is a businessman, and he is familiar with the Gulf region and its ruling elites.

Muhammad Bin-Salman is seen as the top man in charge of all the kingdom’s economic and financial affairs, in addition to being a businessman himself who owns many big companies – acquired both before and after he assumed his current official posts.

He is also planning to set up a sovereign wealth fund as part of his Vision 3030 plan which he seeks to turn into the biggest in the world, and to sell off 5% of the national oil corporation Saudi Aramco which he estimates to be worth $2 trillion.
This sudden embrace of Muhammad Bin-Salman came as a surprise, as the Trump administration had previously given the impression – which rapidly gained currency in Saudi circles — that it was banking on his main adversary and rival within the ruling family, Crown Prince and Interior Minister Prince Muhammad Bin Nayef, to be its strong-man in Saudi Arabia and the Gulf.
That was what CIA Director Mike Pompeo seemed to signal when he visited Riyadh during his recent Middle East tour.

He made a point of meeting exclusively with Muhammad Bin-Nayef and no other top Saudis — neither Muhammad Bin-Salman nor King Salman himself — and presented him with the George Tenet Award in appreciation of his long record and “excellent intelligence performance in the domain of counter-terrorism’.
But Trump completely overturned this impression by inviting Muhammad bin-Salman specifically to Washington, in the knowledge that since his father ascended the throne, his 31-year-old favorite son has effectively been ceded all the monarch’s economic, political, security and military decision-making powers.

Despite his youth, Muhammad Bin-Salman now has the first and last say on almost everything in the kingdom.

It was he who decided to go to war in Yemen, he who decided to sell off shares in the kingdom’s sacrosanct cash-cow Saudi Aramco, and he who decided to establish a grand Arab-Islamic Coalition against terror.
Trump must have discussed a range of important issues with his Saudi guest, such as the war in Syria, the military intervention in Yemen and how to deal with Iran’s political and military ascendancy in the region.
But in our view, by far the most important issue was how many billions the US president could obtain, either directly or obliquely, in return for protecting Saudi Arabia, and by getting it to shoulder the burdens of US policy in the Middle East – such as the cost of intervening militarily in Syria to liberate al-Raqqa and establish ‘safe zones’, or paying the bills for the coming confrontation with Iran, be it political or military, or the already escalating American war against al-Qaida in Yemen.
Trump has described the Gulf states as mere repositories of dollars who ‘have nothing but money’ and owe their survival to the US, without which they would no longer be in existence today.

When he called the emir of Kuwait last month, he demanded $9 billion in what he said were unpaid bills dating or from the liberation of Kuwait in 1991.
Saudi Oil Minister Khaled al-Faleh, who is very close to Muhammad Bin-Salman, recently announced – probably on the latter’s behalf – that the kingdom was keen to invest in the fracking industry in the US, it was as though he were inviting the Americans to make demands in this regard to help fulfill Trump’s campaign promises to boost investment in the US economy in order to create jobs.
It would be wise to avoid jumping to conclusions and wait for some details of what went on in the meeting to emerge – at least from the American side, given that the Saudi side is not known for its transparency.
But of one thing we can be sure: Prince Muhammad Bin-Salman has been given a big boost by this meeting which could accelerate his ascendancy to the throne.

Most of his discussions with the US president and administration will be geared to setting the stage for, or strengthening the prospect of, his achievement of that ambition.