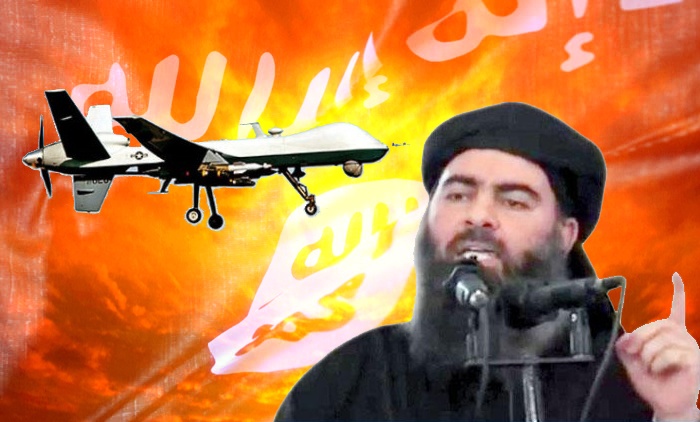 If the US really knew where the IS leader was, why didn’t it kill him?

Psychological operations are an integral part of warfare.

They are one of the most effective means of misleading the enemy and undermining its morale as well as countering and discrediting its media narrative.

The current war that is raging to liberate the Iraqi city of Mosul from the control of Islamic State (IS) – or Da’esh as some prefer to continue referring to it — is no exception.
This psychological warfare has been clearly in evidence in recent days.
A textbook example was provided by the Pentagon official who announced that IS leader Abu-Bakr Al-Baghdadi had fled from Mosul, leaving local commanders to deal with the city’s defense after IS lost 65% of the territories it used to control.
One Iraqi TV station went further, claiming that Baghdadi had been seen in the Al-Boukamal area on the Iraqi/Syrian border, looking emaciated and unable to speak properly due to injuries he had suffered previously.
More seriously, the station said that Baghdadi had gathered local tribal and clan chiefs who support him and delivered a speech in which he conceded defeat in the recent battles and urged his followers to go into hiding and flee to mountain areas.

He also supposedly and accused the Ansar – meaning the indigenous inhabitants of Mosul – of betraying the mujahidin – the Arabs and Muslims who came and settled in the city after it was captured and the ‘Caliphate State’ was proclaimed from the pulpit of its ancient Great Mosque of al-Nouri.
But if the US Department of Defense really knew where Baghdadi was, and was monitoring his moves, why didn’t it kill him – given that the skies of northern Iraq and the whole of Syria are crowded with hundreds of its own and its allies’ warplanes and drones of all sorts and sizes?
And does it make sense that that a leader of Baghdadi’s stature – whatever one may think of him – would publicly admit defeat and to fleeing the battleground, exhort his supporters to run away, and denounce the people of Mosul, even while the battle for the city continues to rage?
Abu-Bakr al-Baghdadi is no military expert.

He holds no military rank and did not graduate from any security or military academy.

But most of the battlefield commanders fighting under the IS banner in Mosul or elsewhere in Iraq or Syria cities are highly trained professional Iraqi officers who used to serve in the army or Republican Guard under Saddam Hussein.

Many were arrested and tortured by Bremer’s agencies Abu-Ghraib and Bucca prisons.

They were then humiliatingly thrown onto the streets, without salaries or pensions.

That is how they were driven into the arms of the extremist Islamist salafism.

US spokespersons have repeatedly spoken in the past of Baghdadi having been killed. Over the past three years, many stories have been planted in the press or leaked to television stations confirming his death, only for it to emerge later that these were inaccurate.

The IS leader has since made a habit of regular coming back from the grave.
An objective account of the situation as provided at the weekend by Maj.-Gen. Maan as-Saadi, commander of Iraqi Special Forces in Mosul, when he said that IS forces had fought fiercely to prevent the fall of the eastern part of Mosul, and that the fighting to capture the western part would probably be even fiercer – due both to the old city’s narrow alleys where armored vehicles cannot pass, and the fact that the defenders would be making a last stand
The point to make here is that psychological warfare methods that were devised decades ago are no longer effective today in light of the communications and social media revolution and the extraordinary speed with which information spreads, in addition, those intended to be on the receiving end of such psy-ops have for the most part become smarter, more informed and better educated.
IS faces dire circumstances, with the armies of 60 countries, equipped with the most sophisticated warplanes, tanks and military equipment, all currently engaged in the offensive to destroy it and recapture Mosul from its clutches.
Its defeat, therefore, is not unlikely. indeed, it is certain.

It has already lost 30% of Mosul, or 17 out of the city’s 40 neighborhoods. But it is clearly premature to talk of it fleeing and conceding defeat.

Its members may have no option but to fight to the death given the siege that is preventing them from withdrawing to al- Raqqa, IS’ capital.
The loss of Mosul, and also Raqqa, by IS may appear to be imminent, just as the group has already lost Fallujah, Tikrit, al-Bab, Jarabulus, Ramadi and Palmyra.

But the real battle that will face its enemies — and how numerous they are – will be over how these areas are run after IS has disappeared. Do they have a clear plan regarding their administration or for dealing with their inhabitants within a framework of genuine national reconciliation that avoids policies of vengeance and marginalization?
The verdict being pronounced by some that IS is all but finished may be somewhat hasty.

The military dimension is just one component of the group’s power and its plans, no less important and dangerous are its ideological aspect, its nurturing environments and its sources of funding (or what remains of them).
It is therefore too early to celebrate the demise or draw the curtain on the final act of this bloody organization.