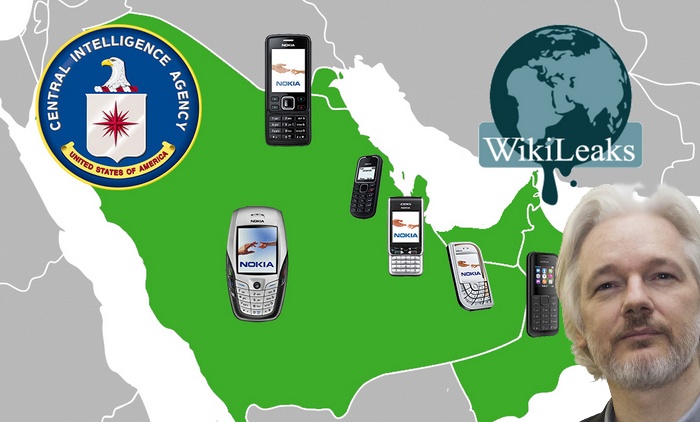 The «Arab Gulf rulers» are using the ancient extinct «Nokia» mobile phones… and not using the latest smart phones.

«Wikileaks» has recently exposed documents that was obtained from CIA regarding their spy acts.

The Rulers of the Arab Gulf countries are using old mobile phones for their communications not because they are unable to purchase the latest smart phones due to their current economical tough time, that most of their countries are going trough such as Saudi Arabia, or for their lack ability to use the latest technologies.

Not at all, they can purchase whatever they want from latest smart phones or tablet devices from the top vendors such as Apple or SAMSUNG etc…

They are even get a custom made phones made from gold and diamonds!

The issue has cleared by the recent «Wikileaks» leaked documents, which exposed CIA’s spy acts and theirs projects/operations to use technologies and electronic devices for their need to obtain more information or other purposes, on the other hand, old mobiles for example such as «Nokia» mobile phones are difficult to be infiltrated or hacked comparing to the new generation of mobile & smart phones.

The Central Intelligence Agency is spying on everyone, their allies, some of their US citizens and US officials, not only through their mobile phones, but also their televisions devices, or any other latest an electronic device that could be in their possession.

Julian Assange the owner of «Wikileaks» denounced the neglect of the US Agency for spyware, which allowed these breakthroughs, and said, «they left a loophole» enabled him to access these information, and get a package of documents exceeds tens of hundreds and even thousands, and described his work, as a «historic exposure of the catastrophic „CIA’s“ work, including the lack of efficiency, and store information on a large degree of importance at once, in one place.

The US president Donald Trump, took this opportunity to continue his attack on the agency and security services which there is no love lost between them anyway, and pointed out that the Agency is still using work methods and spy devices, that are less secure and unsafe and exposing the national security to extreme danger for the mess in data storage procedure.

The truth must be said despite the differ opinions regarding „Wikileaks“ and its activities, that exposed a lot of secrets since almost a decade now and showed the world a very dark side of the United States and its security agencies activates that contradict the values and the ethics of democracy and human rights, not only against other countries but against its own citizens.

Some of the skeptic opinions of „Wikileaks“ and its director Julian Assange, are questioning, why all the work and the exposed documents and secrets are only related and belongs to the United States and its CIA and it never exposed any confidential documents related to Russia, or even Israel for example.

These skeptic opinions actually increased during the recent US presidential elections, when „Wikileaks“ leaked documents related to the personal e-mail account of the Democrats candidate Hillary Clinton, which it lead in some point for her losing the elections to the Republican rival Donald Trump, which Russia was accused of being behind these leaks, without any real evidence to confirm these suspicions and accusations.

The answer could be very simple, because maybe Russia and Israel are more organized and professional, or the turn has not come on them too and maybe, they’ll be exposed soon, no one knows.

Obviously the might of the USA with its war and security establishments has been shown only via Hollywood movies, however, the situation on real life is completely the opposite.

The United States has entered an era of collapse which is give signs of that collapse in all fields, economy, security, military, social & education with US dept of 19,931,228,821,003 USD.

How in the world a country with all this dept can perform well at all ?!

We’re all aware of the lack of privacy these days under the social media „Facebook“ and „Twitter“ and „WHATS APP“ etc… and the entire internet in general because all of it are infiltrated, as it revealed by „WikiLeaks“ documents, simply now, there is no longer any secrets to be kept, or things that we can hide for long unfortunately.

Maybe the time has come for us to go back in time and turn „old school“, at least we’ll not be exposed to some smart phone to explode in our pockets, like the recent Apple and Samsung smartphone explosions incidents, as if these smartphones being made by ISIS or something!!!

God be with us all and we only ask for peace