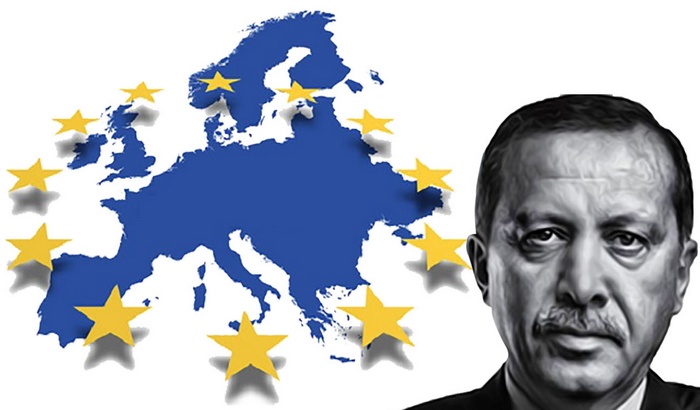 In his row with Europe, the Turkish president is replicating the behaviour that poisoned ties with most of his country’s

Tensions have been rising sharply between Turkey and a number of European countries against the backdrop of the ruling Justice and Development Party (AKP)’s insistence on campaigning in Europe for a ‘yes’ vote in the forthcoming constitutional referendum that would strengthen the powers of President President Recep Tayyip Erdoğan.
The latest episode of this tension – which is rapidly assuming crisis proportions – unfolded in The Netherlands, following the Dutch authorities’ decision at the weekend to cancel a planned AKP rally in Rotterdam.

When Foreign Minister Mevlut Cavisoglu, who was to address the gathering, insisted on coming to the country regardless, they withdrew landing rights for his plane and summoned the Turkish ambassador to lodge a protest.
Erdoğan reacted by unleashing all the venom he could muster, describing the Dutch as ‘fascists’ and ‘Nazi remnants’ and threatening them with retaliatory measures, including denial of access to Turkey to Dutch aircraft and officials (but not the people).

Despite widespread outrage at his unrestrained tone and rhetoric, it was echoed in subsequent statements by senior aides and officials.
The same thing happened — and the same Nazi epithets and threatening language were employed – last week with Germany, though that crisis was contained by the restraint of Chancellor Angela Merkel, who exercised extreme self-control in refusing to respond to Erdoğan’s diatribes.
But the row with The Netherlands has continued to escalate, with a number of other European states and politicians declaring their solidarity with the country.
The Europeans cite security concerns for the cancellation of these rallies and the possibility of clashes occurring between opponents and supporters of the deeply divisive Turkish president among members of their large Turkish communities.

Many of these are of Kurdish origin, and fiercely oppose not only Erdoğan but the prospect of him being endowed with sweeping extra powers under the new presidential system being proposed in the referendum.

Most of the three million-odd people of Turkish origin in Germany and the 400,000 in The Netherlands are citizens of the two countries.

They have been on the receiving end of a vicious racist campaign by the ascendant far right, and face a frightening rise in Islamophobia in society at large.
Given these conditions, it is hard to fathom Erdoğan’s insistence on holding these rallies and sending his ministers to address them without first consulting the host governments, and his refusal to try to understand their security concerns and domestic political considerations.

He is will aware of the deep political rifts dividing Turkish communities in Europe – just as in Turkey itself – in addition to other sectarian and ethnic divisions.

In Turkey, Erdoğan has been running the country under draconian emergency rule measures introduced after the failed military coup against his government in July.

Under this legislation some 50,000 people have been detained and more than 100,000 sacked from their jobs, including judges and large numbers of academics, teachers and military officers, on the pretext that they were linked to or sympathized with those involved in the coup or its alleged orchestrator the US-based cleric Fethullah Gulen.

Erdoğan can apply this law in Turkey to arrest his opponents — including elected legislators — close down newspapers and muzzle dissenting voices.

But he does not hold sway in Europe, where there is little love left for him or his party after they opened the floodgates to migration to European countries and used the migrants as bargaining and extortion card against the EU to obtain 6 billion euros in aid and visa-free access to Turkish citizens.

For Turkey’s relations with Europe to be plunged into unnecessary crisis – and purely for reasons of partisan domestic posturing — is more damaging to Turkey and its citizens than it is to the Europeans.

It could also contribute to worsening Turkey’s economic crisis, with many experts warning that the economy is in a seriously precarious state.

So why has Erdoğan upped the ante so recklessly against his European allies, when he is aware of the dangers and negative consequences for his country?

Perhaps he has begun to feel that his chances of winning the referendum vote are receding and that the votes of Turks in Europe will not for the most part be in his favour, so his best bet lies in fomenting an outpouring of nationalistic fervor.

It is not just in Europe that Erdoğan has exhibited such behaviour: picking fights abroad in pursuit of short-term goals or domestic advantage, in a manner that conveys an impression of impulsiveness, inconsistency and irrationality.

It has also been witnessed in Syria and the entire Middle East.

As a result, Turkey’s relations with most of its immediate neighbours – Iran, Iraq, Syria, Iran, Greece, Bulgaria and Armenia –are extremely tense if not overtly hostile.

Now the tension is spreading to Europe, where Germany is Turkey’s biggest partner with 36 billion euros in annual trade followed by Austria and The Netherlands.

The hole Erdoğan has dug for himself gets ever deeper, but he resolutely refuses to stop digging. His chances of being hauled out have become slim if not completely non-existent.