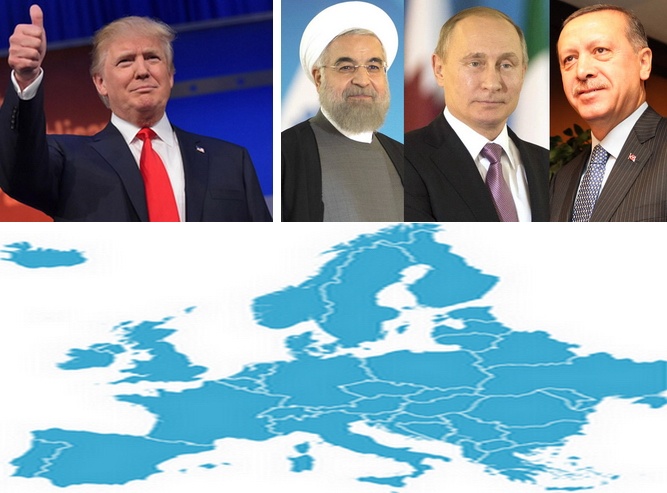 The general policy that the United States is adopting, been for long time uncertain full of Random chaotic & incomprehensible, which only put the US as the only beneficial side from the Syrian Crisis, because the real situation on the ground at that country, which most of the western media doesn’t want their people to know, is very complicated due to US work that made it so tough and difficult for the best political analysts in the world to determine friend from foe on that country territory.

The several armed groups that are in Syria (the Big & the Small of them) are fighting the government forces, then fights the «Islamic State» or even fight the coalition forces or fighting each other & with that fact all the experts has been fell into making mistakes when they analyze the situation in Syria.

Washington «huffing & puffing» statements that has echoes in the whole world, bragging about the huge efforts that the United States is giving for fighting the global terrorism, is in fact quickly evaporate & fade to the none, after simple analyzing these «Efforts» by comparing it to the facts on the ground.

By provide the so-called «moderate Syrian opposition» systematically with modern American weapons & military equipment — which is in fact a gang of militants — caused suspicion in the United States’ intention for peaceful purposes in the region.

We have to admit that, the aimed Russian measures, that gives hopes to the Europeans to stabilize the situation in Syria, and thus — to reduce the terrorist threat & stop the refugees flow from the Middle East, which is swept the European countries.

The emergence of a new political & military alliance between Russia, Turkey & Iran, approved by Europeans (with the United States) with caution, breaks new ground in solving the Syrian problem.

As a result of the meeting between the Russian & the Iranian leaders in Baku last August, and following talks with the leadership, enabled Vladimir Putin to combine the possibility of Turkey’s Sunni & Shiite Iran in resolving the Syrian protracted conflict.

The historical importance of these two countries in ensuring the balance of power & political stability in the Middle East will once again guarantee to bring about positive changes in the region.

The new alliance has already put a certain amount of joint actions — both political & military – with a concept to address the reasons that recently contributed to the prosperity of the composition «Islamic state» & similar terrorist organizations in Syria.

As the British «Financial Times» posted, that, the result of closer ties with Russia & Iran, Ankara softened its position significantly against the Assad regime.

In accordance with the agreements reached with the new allies, Turkey has become fully binding on the closure of «corridors» at their borders that armed gangs using it to get new recruits, equipment, money & weapons.

Of course, all of these countries have their own geopolitical interests in the region, however, if all them are working at the end towards a common goal — the conflict in Syria will transmission to a political settlement — so why not use this opportunity?

However, the White House, worried about the success of the Russian troops in Syria and decided to distance Russia from solving the Syrian problem, In particular, the official representative of the US State Department Mark Toner, told reporters that «Russia will not participate in the ministerial meeting scheduled for March 22 to 23, that includes 68 countries in the fight against the „Islamic state“ under the pretext that it „Russia is not a member of the international coalition“…

Unfortunately, most of the European countries leaders, doesn’t have a specific position on Syria, & habitually, they continue quoting the White House statements, which is more often directly contrary to the common sense & the national interests of their European citizens.

At the same time, Washington is calling for its supporters always to work in order to „preserve the democratic values“, although they don’t see it necessary to be involved in this process.

The new presidential decree of President Trump will be active in March 16, that will force to restrict immigration from countries that, in the opinion of the US leadership pose a threat to the security of the United States. According to this document, it prevents the entry of nationals of Iran, Syria, Yemen, Libya, Somalia & Sudan to the United States for three months.

The First Full list of banned countries, excluding Iraq from the list, which is currently fighting the „Islamic state“.

According to experts, this decision was approved under pressure from Trump’s critics, because of its „anti-Muslim“, but in fact, is a political move that have a well thought about, because with this move the United States will excludes supporters in Iraq to counter Iran who is Russia’s Ally.

However, to get full satisfaction by his supporters still on Baghdad to work more, or else… the official representative of the US administration also said that, „the White House did not rule out the possibility of expanding the list of countries which are banned from entering the territory of the United States“.

In conclusion, there is a hope, that European leaders will precisely follow Trump & stop focus on anti-Russia lobby, & really start finally begin thinking about the safety & the well-being of their fellow citizens.