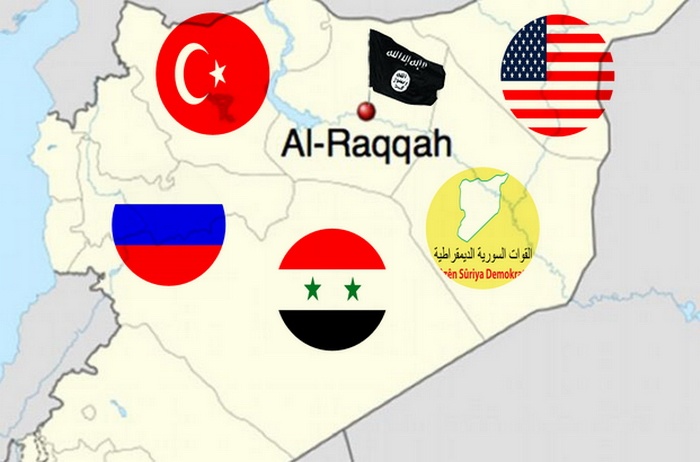 The US, Russia and Turkey don’t agree on who should take IS’ Syrian stronghold or what should happen afterwards
The chiefs of staff of the Russian, American and Turkish armed forces held a surprise meeting in the resort of Antalya on Tuesday to draw up plans for the recapture of the Islamic State (IS) capital of al-Raqqa, as a new contingent of US troops was deployed in northeastern Syria and the Trump administration was reported to be planning to send more.
The thorniest problem discussed by the three army chiefs was the role to be played by the mainly Kurdish Syria Democratic Forces (SDF).

The Turkish side insists they should have no part in the liberation of Raqqa and has declared its willingness to deploy its own forces for the task, an offer which Russia, Iran and the Syrian government reject.
Lebanese sources close to Tehran affirm that Iran and Syria are adamantly opposed to allowing Turkey and its forces any role in Syria, and that the Russians understand this position.

That is why they prevented Turkish forces from capturing Manbij, and, to deny them any pretext to advance on the town, reached an agreement with the Kurds to withdraw from it and hand it over to the Syrian Arab Army.
The dispatch of additional US troops to Syria is in line with President Trump’s declared objective of eradicating IS in Syria and Iraq as the top priority on the grounds that it poses the greatest threat. The question remains, however, as to what plans the American and Russians have for the phase that follows the ejection of IS from Raqqa and Mosul.
In previous military interventions in Libya and Iraq, the US had no follow-up plans, resulting in the deterioration of the situation in both countries and leading to the spread of anarchy and instability. It is not unlikely that the same scenario will be repeated in the post-Raqqa and post-Mosul phase.
There are two possibilities in this regard: Raqqa and Mosul could either revert to the sovereignty of the Syrian and Iraqi states respectively, or the two cities – and specifically Raqqa – could be handed over to the control of armed opposition factions. This may be resisted by Russia, the Syrian regime’s ally.
The presence of US forces on Syrian territory, as we are witnessing on the outskirts of Manbij, without any coordination with the government in Damascus, may prove to be a major gamble. It could provoke many parties, especially if repeated around Raqqa in the days and weeks to come.