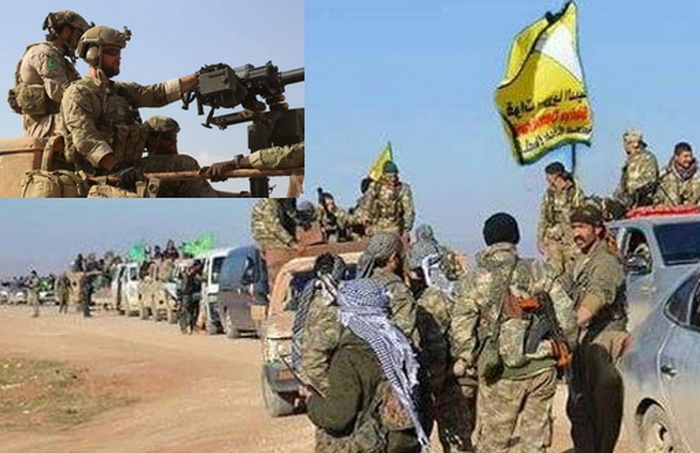 The United States appears to have decided to enlist the help of Kurdish YPG militia in a campaign to push Islamic State out of its stronghold in Raqqa, Syria, thwarting Turkey’s ambitions, a senior Turkish official said on Tuesday.

Meanwhile, Turkish Prime Minister Binali Yildirim said Turkey, the United States and Russia must coordinate to clear Syria of terrorist groups. The three countries’ chiefs of staff were working to prevent clashes between the different parties.

Yildirim spoke as Turkey’s military chief of staff met his U.S. and Russian counterparts in the southern Turkish province of Antalya to discuss coordination in Syria. The official, who spoke on condition of anonymity, said the results of the meeting «could change the whole picture».

“… It appears that the U.S. may carry out this operation with the YPG, not with Turkey. And at the same time the U.S. is giving weapons to the YPG”, the official said.

«If this operation is carried out in this manner there will be a cost for Turkey-U.S. relations, because the YPG is a terrorist organization …»

Chairman of the U.S. Joint Chiefs of Staff General Joseph Dunford attended the three-party meeting at the invitation of his Turkish counterpart, a spokesman for Dunford said.

The spokesman, Navy Captain Greg Hicks, said the military chiefs discussed security in Iraq and Syria and the importance of additional measures to avoid accidents.

A U.S. defense official, speaking on condition of anonymity, said Dunford did not inform his Turkish counterpart of any decision about the Raqqa offensive, in remarks that appeared at odds with the Turkish account.

Ankara has been pressing the United States to change its strategy for fighting Islamic State in Syria by abandoning the YPG and instead drawing on Turkish-backed Free Syrian Army (FSA) rebels to retake Raqqa.

Turkey views the YPG and its political affiliate the PYD as an extension of the Kurdistan Workers Party (PKK), which is waging an insurgency against the Turkish government.

Turkish President Tayyip Erdogan said last week the next target of his country’s Syrian operation was Manbij, which is controlled by the U.S.-backed Syrian Democratic Forces (SDF).

But Yildirim said then that military action by Turkey would not make sense unless coordinated with the United States and Russia.

After clashing with FSA rebels west of Manbij this month, the Manbij Military council declared a deal with Russia to hand front-line villages to Syrian government control to prevent their coming under Turkish control.

Rapid developments in the war for northern Syria — the most complicated theater in the multi-sided conflict — are setting new limits on Turkish power, while affirming the role of the U.S.-allied YPG militia that Ankara entered Syria to fight.

The Syrian government has emerged as a major player in the war for the north after punching through a swath of Islamic State-held territory, blocking any further Turkish advances from the buffer zone it has carved out in Syria near its frontier.

In August, Turkey-backed forces launched an operation to drive Islamic State away from its border with Syria and prevent the YPG from taking territory in their wake.

Since pushing the jihadists out of their al-Bab stronghold, fighting has focused on villages west of Manbij, setting Turkish-backed rebels against the Manbij Military Council, part of the U.S.-backed SDF that includes the YPG.