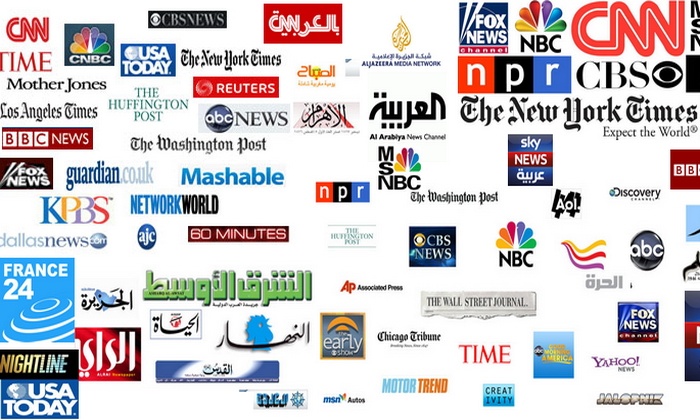 In only a few months, the content of the Western national and international medias has undergone profound change.

We are witnessing the birth of an Entente about which we know almost nothing — neither the real initiators, nor the real objectives – but whose direct anti-democratic consequences can be noticed immediately.

The West is currently going through an unprecedented systemic change – powerful forces are progressively orienting the totality of medias in a single direction.

At the same time, the content of the medias is mutating– only last year, they were still logical, and tended towards objectivity.

They offered one other mutual contradiction in a spirit of healthy competition. Now they act in gangs, basing their coherence on emotions, and becoming vicious when they are facing people they condemn.

The idea of an Entente between the medias is an extension of the experience of the International Consortium for Investigative Journalism (ICIJ), which does not unite the medias, but only individual journalists.

It made itself famous by publishing information stolen from the accounts of two law firms in the British Virgin Islands, and from Price water house Coopers (PwC), the bank HSBC, and the Panamanian firm Mossack Fonseca.

These revelations were mainly used to discredit the Russian and Chinese leaders, but also, once in a while, to shine some light on genuine offenses committed by the Westerners.

Above all, under the honorable pretext of the struggle against corruption, the violation of the confidentiality of lawyers and banks seriously damaged thousands of their honest clients without any reaction from public opinion.

Over a period of approximately forty years, we have been witnessing the progressive grouping of medias within certain international trusts.

From now on, the alliance operated by Google Media Lab and First Draft is forging links between these groups, which already enjoyed a dominant position.

The presence in this Entente of the three most important Press agencies on the planet (Associated Press, Agence France-Presse, Reuters) guarantees it hegemonic power. This is without any doubt an «illicit entente», established not with the goal of price-setting, but mind-setting, the imposition of an already dominant thought.

We may have noticed that all the members of the Google Entente — without exception — have already, over the last six years, given unequivocal visions of the events that occurred in the Greater Middle East.

And yet there had been no prior agreement between them, or at least, none of which we were aware.

It is intriguing to note that five of the six international television channels which participated in the NATO propaganda cell are part of this Entente (Al-Jazeera, BBC, CNN, France24, Sky, but apparently not Al-Arabiya).

In the United States, France and Germany, Google and First Draft assembled the medias present locally in the countries concerned, and others present on the international scale, to check the veracity of certain arguments. Besides the fact that we do not know who is hiding behind First Draft, and what political interests may have influenced a commercial company specialized in computer science to finance this initiative, the results achieved have little to do with a return to objectivity.

First of all because the allegations are not chosen for the place they occupy in the public debate, but because they have been quoted by individuals that the media Entente intends to vilify. We might imagine that these verification enable us to get a little closer to the truth, but that is not the case at all – they reassure the citizen in the idea that the medias are honest, while the people they are condemning are not.

This approach is not aimed at better understanding the world, but at beating down the people to be sacrificed.

Next, because an unwritten rule of this media Entente stipulates that only allegations from sources outside the Entente should be checked.

The members agree not to use any critical faculty in the mutual appreciation of their work.

They agree to reinforce the idea that the world is divided in two — «we» who tell the truth, and «the others» who are liars.

This approach is damaging for the principle of pluralism, a precondition for democracy, and opens the way to a totalitarian society.

This is not a new phenomenon, because we saw it at work during the coverage of the Arab Springs and the wars against Libya and Syria, but for the first time, it is aimed at a Western line of thought.

Finally, because the allegations that have been qualified as «false» will never be envisaged as errors, but always as lies. The point is to charge the «others» with Machiavellian intentions in order to discredit them. This approach damages the presumption of innocence.

That is why the functioning of the ICIJ and the Entente created by Google and First Draft violates the Munich Charter adopted by the International Federation of Journalists (IFJ) (Title II, articles 2, 4, 5 and 9).

It is no coincidence that certain absurd legal actions have developed against the same targets as those in the sights of the media Entente.

In the United States, the Hogan Law has been dragged out for use against the Trump team, despite the fact that this text has never, absolutely never, been applied since its promulgation two centuries ago.

And in France, the Jolibois Law has been revived for use against the political tweets of Marine Le Pen, despite the fact that jurisprudence had limited the application of that law to the distribution of a few ultra-pornographic magazines lacking a plastic wrapping.

Since the principle of the presumption of innocence for scapegoats has been eradicated, it is now possible to put anyone on trial for any legal pretext.

Furthermore, the legal actions mounted against the Trump team and Marine Le Pen, in the name of the laws named above, should also be be brought against a great number of other people – but they are not.

Moreover, citizens no longer react when the media Entente itself broadcasts false allegations.

Thus, in the United States, they imagined that the Russian secret services had a compromising dossier on Donald Trump and were blackmailing him, Or, in France, this Entente invented the idea that it is possible to employ a fictitious parliamentary assistant, and went on to accuse François Fillon.

In the United States, the large and small medias which are members of the Entente went after the President.

They garnered their own information from the wire-tapping of the Trump team which had been illegally ordered by the Obama administration.

They work in coordination with the magistrates, who are using them to block the actions of the present government. This is without doubt a Mafia system.

The same US and French medias are attacking two candidates for the French Presidential election — François Fillon and Marine Le Pen.

To the general problem of the media Entente is added the false impression that these targets are victims of a Franco/French conspiracy, whereas in fact, the instigator is a US citizen.

The French notice that their medias are rigged, wrongly interpret the conspiracy as being directed against the right wing, and continue erroneously seeking the manipulators in their own country.

In Germany, the Entente is not yet effective, and probably will not be until the general elections.

During Watergate, the medias claimed to represent a «Fourth Estate», after the Executive, the Legislative, and the Judiciary.

They affirmed that the Press exercised a function of control over the government in the name of the People.

We can ignore for a moment the fact that President Nixon was charged with a similar offense to that of President Obama – bugging his opponent.

We know today that the Watergate source, «Deep Throat», far from being a «whistle-blower», was in reality the Director of the FBI, Mark Felt.

The treatment of this affair was a battle between a part of the administration and the White House, in which the electors were manipulated by both sides at once.

The idea of a «Fourth Estate» supposes that we recognize the same legitimacy for the 14 corporate trusts which own the great majority of the Western medias as for the citizens.

This is to affirm the substitution of an oligarchy for democracy.

The remains one point which needs clarification – how have the targets of the Entente been chosen?

The only obvious link between Donald Trump, François Fillon and Marine Le Pen is that all three hope to re-establish contacts with Russia, and fight with her against the breeding ground of jihadizm – the Muslim Brotherhood.

Although François Fillon was the Prime Minister of the government implicated in these events, all three of them represent the train of thought which contests the dominant vision of the Arab Springs and the wars against Libya and against Syria.