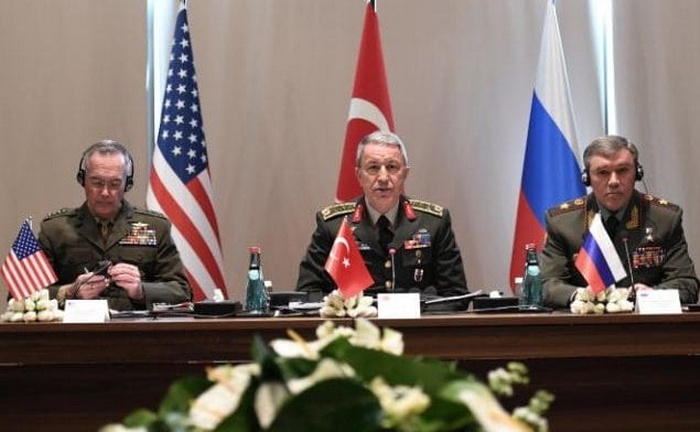 Turkey’s military chief of staff is meeting his U.S. and Russian counterparts in the southern Turkish province of Antalya to discuss regional security, notably in Syria and Iraq, the Turkish armed forces said on Tuesday.

No further details were available of the meeting being hosted by General Hulusi Akar.

In August, Turkey-backed forces launched an operation to drive Islamic State away from its border with Syria and prevent the Kurdish YPG militia taking territory in their wake.

Since pushing the jihadists out of their al-Bab stronghold, fighting has focused on villages west of Manbij, setting Turkish-backed rebels against the Manbij Military Council, part of the U.S.-backed Syrian Democratic Forces (SDF) that includes the YPG.

Turkey views the YPG as an extension of the Kurdistan Workers Party (PKK), which is waging an insurgency in Turkey.

Manbij is controlled by the Manbij Military Council and the U.S. military has deployed a small number of forces in and around the city to ensure that different parties do not attack each other.

Turkish President Tayyip Erdogan last week said the next target for the operation in northern Syria was Manbij after Ankara-backed rebels seized Al-Bab.

But Prime Minister Binali Yildirim said military action by Turkey would not make sense unless coordinated with the United States and Russia.

After clashing with Turkish-backed Free Syrian Army rebels west of Manbij earlier this month, the Manbij Military council declared a deal with Russia to hand front line villages to Syrian government control to prevent their coming under Turkish control.