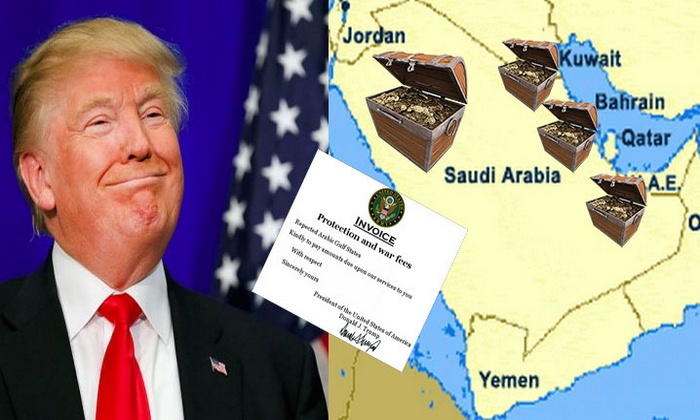 Did Trump called on the Emir of Kuwait to pay nine billion dollars remnants of the Gulf War in 1991, Bill? And why the CIA director met the Saudi Crown Prince Mohammed bin Nayef, only during his recent visit to Riyadh?

If this story was true, which been received via words of an Arab diplomat prominent official, that he says President Trump demanded from Kuwait, payment of $ 9 billion owed to the US for taking out the Iraqi forces from Kuwait in 1991, if this is true, it’ll mean that there are more similar «bills» was sent to the other Arab gulf states, to pursuant Trump threats which these countries must pay for the protection that the United States is offering them.

This story confirms that Trump revealed this request during a telephone conversation that he had with the Emir of Kuwait Sheikh Sabah Al-Ahmad, when the Emir debated with him that, Kuwait had paid to the US Treasury all amounts that was required, similar to the other Arab Gulf States, estimated of hundred billion of US dollars, these amounts that, President Trump insisted for paying these amounts, which hit the Kuwaiti Emir with huge concern.

It is still not known whether Trump was demanded the Saudi King Salman bin Abdul Aziz, and the Crown Prince of Abu Dhabi Sheikh Mohammed bin Zayed, similar amounts, three weeks ago, but these indicators suggest that he did the same thing, and what confirms this conclusion, the declaration of Dr. Khalid Al-Falih, the Saudi energy minister, after a direct call, that the Saudi energy minister, expressed his country’s intention to invest in the «fossil oil» sector in the United States.

Trump said in an interview that «the Gulf states do not have anything other than money, and their survival credit goes to the United States», which is reflect top insolence and extortion at the same time.

According to diplomatic sources that I’ve met on the sidelines of my participation in the annual conference of the Institute for Defense Studies and Analyses, which began Monday in New Delhi, to talk about my book «Islamic State the Digital Caliphate», that was very notable, the CIA Director Michael Pompeo met with Prince Mohammed bin Nayef, the Saudi Crown prince and the Interior Minister, during his visit to the Kingdom of Saudi Arabia ten days ago, and didn’t meet the Saudi King Salman, and his son, which was interpreted as that Trump administration, supporting the Saudi Crown Prince and his major role the fight against terrorism.

This American attention with the Saudi Crown prince Mohammed bin Nayef, is perhaps due to Washington’s crystallized conviction of the strong return of «Al Qaeda» to the Arabian Peninsula from Yemen, which requires a wider coordination with the Saudi security establishment, which sits on its throne the Crown Prince bin Nayef, and expertise that span for two decades in the fight against this organization.

Chances of President Trump steadfastness at the White House is retreating after, sacking two of his most important officials in his administration on charges of contacting the Russian embassy in Washington, these two officials are Michael Flynn, the national security adviser, and Jeff Sessions the Minister of Justice, who adopted the new Immigration Act, which Iraq was deleted from its list of countries that, the US will close its borders in faces of the comers from these countries in this upcoming seven months, therefore President Trump, maybe will resort to force Arab Gulf States to pay the bills of his promises to rebuild the US infrastructure, which will cost hundreds of billions of dollars.

The Russian ambassador in Washington Sergei Kislyak, who played a major role in the fall of Trump officals, one after the other, which some Russian sources assured us in the Conference, that he’s a professional diplomat and he’s not a member in any security agency, and perhaps he might topple other officials in the upcoming period, including President Trump himself, due to his contacts and meetings with the «Traders» of the current administration, and due to the big amount of serious information, that he owned, including personal and business files.

The Russian ambassador will inevitably enter the political and diplomatic history, and we’ll not be surprised, if he occupies a significant position in the Russian administration, as a reward for his penetrations and achievements in the US capital.