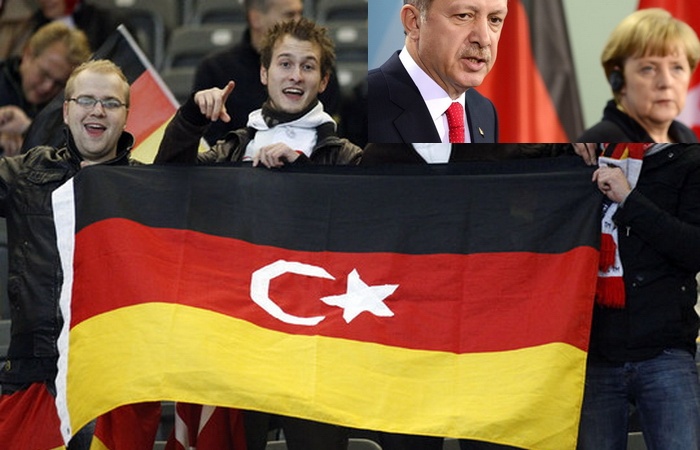 With «fascism» and support terrorism accusations with violation of human rights… What are the reasons for this escalation against the largest trading partner of Turkey? Are we in front of a new apology… and who many friends of Turkey are left?

The Turkish President Recep Tayyip Erdogan fired on Germany, and accused its government of supporting terrorism and harboring terrorists, he said that, the detained German journalist in Turkey Deniz Yucel, who is the correspondent of German newspaper «Die Welt» is a «terrorist» and operates as a spy for Germany in Turkey.

The Turkish-German relations were not good in the past two years, and entered a period of crisis after European accusations on the Turkish President Erdogan, by using Syrian refugee issue as a bargaining «blackmail» against Europe for economic and political concessions, especially after signing his agreement with the European Union provides Turkey with six billion dollar, allowing their citizens to enter the European countries without visas, in exchange for the closure of Turkey’s borders in the face of immigrants who use its territory to ride the sea towards the European mainland.

In the past two days it has escalated tensions after the cancellation of three gatherings by the German Government, that these gatherings rallies for the supporters of the Justice and Development Party, that were planned in supporting the constitutional amendments that President Erdogan wants to make, that will give him absolute authority to change the system and turn it into a Republican presidential system, eliminates the current parliamentary system and the prime minister.

Turkish community in Germany, is huge, estimated by semi-official statistics, about 3.3 million, carrying mostly German citizenship, along with Turkish nationality of origin, with annual trade exchange of 35 billion dollars. between Turkey and Germany, with Germany being Turkey’s largest commercial ally in Europe, perhaps in the whole world as well.

The Turkish Justice Minister Baker Bozdag, who was supposed to be one of the main speakers at the rallies that was canceled, along with the Minister of Economy, Justice Minister Bozdag accused Germany with Violating the Human Rights and beating it out through the Wall, describing the event cancelation, in which he was one of the speakers to promote the constitutional amendments, that the decision of the event canclation was «fascist» and violates European democratic values.

German authorities said that, they had to cancel the rallies for security reasons and for the fear of possible clashes that might occurred between supporters of President Erdogan and his opponents, coupled with a large proportion of Turks of Kurdish origin, but President Erdogan stood by his accusations, and climb up his attack against Germany, because he feels that the voices of the Turkish community in the referendum constitutional amendments in the next April 16, may be very important to tip the win.

German press dealt with the accusations of fascism and violation of human rights, that Erdogan and his ministers are accusing their country, by recalling that Erdogan regime is currently detains 43,000 citizens in detention camps without trials, and on the basis of emergency laws applied since the failed military coup in July (last July), which the Turkish government was charged the Turkish preacher Fethullah Gulen to stand behind that coup attempt, as well as firing more than 100,000 public educator, judge from their jobs and other government employees accusing them of sympathizing with the coup.

These German journalist responses, involve with a lot of health, because Turkey’s record on human rights is not that bright one at all, where more than a hundred journalists are arrested, and the closure of several newspapers and magazines and television stations, and criticized the repressive measures of the Turkish freedoms, especially the freedom of opinion and expression.

The Justice and Development Party won the respect and the support of the West because of respecting those freedoms, and presented a model of democracy based on development, tolerance and co-existence and moderate Islam, and to maintain a secular state, but after these lines and props are begun collapsing one after the other, many people broke up from President Erdogan, the leader of the party, including the nearest close to him, and his associates in the party, such as Abdullah Gul, the former president, who is hugely popular, the most prominent of about nine million followers on «Twitter», and Dr. Ahmet Davutoglu, the party scene and the owner of «Zero problems with neighbors» theory, these two has Both opposed the constitutional amendments, which will bring Turkey into the reign of the Ottoman sultans.

Turkey are currently surrounded by a belt of enemies, its relations with Iran and Greece tense, and fighting a war in Syria, and occupies part of its territory under the establishment of a safe area cover, and now entering in a crisis with Germany and the European Union in general, and may not left with any good relationship, but with the state of occupation Israeli.

Seriousness of this tension lies in the possibility of negative repercussions on the Turkish interior, national demographic and unity in particular, and the loss of a country like Germany at a time when the Turkish Lira stands on the brink of collapse (dollar currently equals 3.8 pounds), and declining rates of development to less than half (amounting to 36 billion dollars a year), this loss means more economic difficulties.

Accusing Germany with fascism is a serious accusation, that reflects Turkey’s confusion and the lack of vision, because Germany is not only, Turkey’s most important trade partner, but also is NATO partner as well.

The situation in Turkey is not comfortable at all, and tense suggests with further instability, and this is the opinion of the vast majority of independent experts inside and outside the country.

We are waiting for new Turkish apology, this time to Germany after callback all the accusations, just like similar situations most recently apologizing to Iran, Iraq, and Russia before them… But the damage has been already done after all … and the upcoming days will show us.