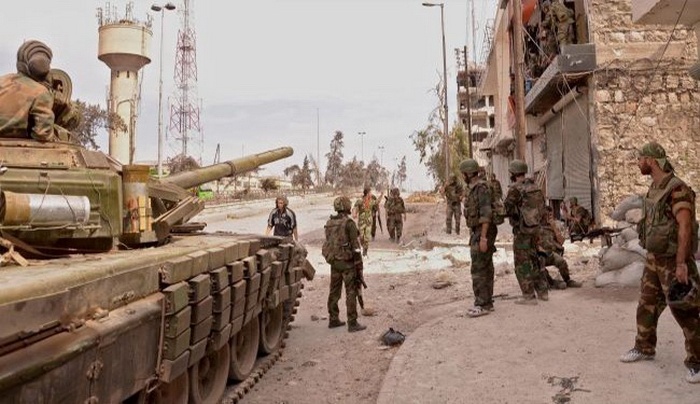 What is the next area? Raqqa or Al-Bab or Idlib? And against whom the next confrontation will be, with the Turks or Kurds? What is the Russian message to the Syrian opposition in Geneva?

The Syrian army’s success in restoring the ancient city of Palmyra from the «Islamic state», with Russian air support, is a major achievement, both militarily and politically, as well as being a moral support to the Syrian leadership which was needed.

It is clear that this move was a message for many destinations, confirm that the Russian Syrian coalition in military fields is still at its peak, as it confirms the readiness of the Syrian army to fight battles to restore other cities with the city of Raqqa is in top of them, the capital of the «Islamic state», and the Syrian army didn’t lost momentum and strength despite six years of fighting.

In other words, the timing of the restoration of the city of Mosul comes to resolve the current debate about who would run the war against the «Islamic state» in Raqqa, it is the US-backed, Syria democratic forces of Kurds, either, Turkey-backed «Shield of the Euphrates,», and the answer may be not this or that, but the Syrian army, or so we believe, Raqqa is a Syrian city anyway.

We do not believe that the Syrian army restoring the city of Palmyra, was difficult, the city was lost to the «Islamic state» then they came back and took it, lose it again, and here is they reclaim the city back again, Palmyra city is not that real strategic value area, being merely an oasis of relics in the heart of the desert includes Roman antiquities dating to two thousand years, and the main features of the former Palace of the Emir of Qatar Hamad bin Khalifa Al-Thani, which was built and furnishes it at the height of his friendship with Syrian President Bashar al-Assad, and his father before that.

They are so many murmurs was raised about the city and its fall and restored more than once, and among the stories promoted by the Syrian opposition, that, the Syrian army withdrew without a fight and handed it over to the fighters of the «Islamic state», which confirms the alliance between the two parties, and may be withdrawal is unlikely, because, it seems like that, the Syrian army, wanted to concentrate all his forces to restore the city of Aleppo, and the country side of Damascus, which gives it the highest priority on the ladder of military plans, and when they succeeded in restoring Aleppo & large areas in around the capital, and many parts of the Damascus ‘s Ghouta, it’s time to Raqqa, and we’ll not be surprised if this is the next battle toward the city Idlib, which has become the gathering point of all Syrian oppositions and radical factions such as «the borard of Levant liberation» formerly known as (Al-Nusra front), and «Ahrar al-Sham», and «the army of conquest» (Jaysh Al-Fateh), and factions of the free Syrian army that fall under its umbrella, or toward the city of Al-Bab wich is currently under the Turkish «Shield of the Euphrates forces », in which the Syrian authorities considers this control as an occupation, and a violation of Syrian sovereignty.

Perhaps, the Syrian army command announcement of this victory was not a coincidental announcement, at the time of «the Geneva 4», is being held, between the regime and a delegation of three delegations representing the opposition, without achieving any significant progress in the negotiations, in order to reach a political solution for the crisis, like its previous talks.

The impression that the Russian-Syrian-Iranian coalition, adopt a two-pronged strategy, the first focused on continuing military plan to restore all the Syrian territories under counter terrorism title, because most of them controlled by Islamic forces placed on the terrorist list, and the second to prolong the negotiations as long as possible in the hope of the impatience of the opposition negotiating delegation and withdrawal, as has been practiced in the previous rounds.

What confirms this strategy, and the second part of which, in particular, the spokeswoman for Russia’s Foreign Ministry, Ms. Maria Zakharova, accusing the opposition supreme body of the negotiations, which have the support of Saudi Arabia, of sabotaging peace talks in Geneva, after one day of the meeting that been held between officials in the Russian Foreign Ministry with representatives from the opposition, to narrow the gap differences on the negotiations agenda.

Ms. Zakharova drew a fatal bullet to the opposition delegation, when she said, «unfortunately, we’ve notice, building on the results of the last few days of talks, we now have doubts about the ability of the opposition representatives to make a deal».

Sticking point that, the opposition that came from Riyadh wants to discuss the transition phase, and the Russian doesn’t mind this request, but they are demanding the unification of the opposition of its three base, Riyadh, Moscow, Cairo, in one delegation, which is rejected by the Riyadh opposition, because they hates Cairo and Moscow’s delegation representatives more than they hate Bashar Al-Jaafari, the head of Damascus delegation.

The Syrian government will celebrate the restoration of Palmyra, and we remind, that they are the best to defeat terrorism, according to their officials in today’s remarks, while their delegation in Geneva watching the disagreements of the opposition and the criticism pointed at them from the Russian side, and the UN representative Staffan de Mistura to derail the negotiations.

The Russian bear holds all the game strings, and guided it in favor to the results that he and his allies wants, whoever can say different than this, may drink from the waters of Geneva’s lake which is, so fresh and cold all together.