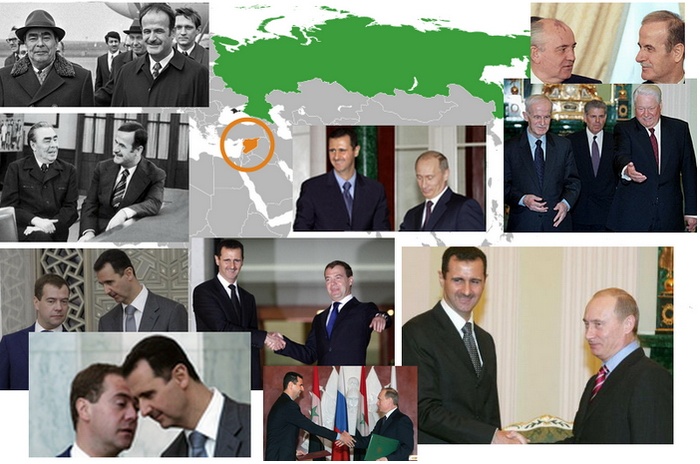 «Assad words were carefully deliberated, because he knew that the Russian Federation sunken into chaos, corruption with Mafia control most of the critical resources, with the obvious weakness of government to be able to control the capabilities & the resources of the country, with the Russian army exhausted & corruption is eating what’s left of its capabilities & humiliated since the withdrawal from Afghanistan in 1988 & being somehow involved & dismantled by the internal conflicts of the collapse of the Soviet Union between 1990-1992, two years later the Russian Army‘s rubbed it’s nose at the mountains of the Caucasus in Chechnyan first war, which lasted from 1994 until 1996».

«The Russian government was in a messy situation with some information that said, that they don’t actually possess documents that clarify the numbers for all these debts & amounts demanded by Yeltsin, so after works in scheduling the share of the Russian Federation as a creditor were clarified & Syria paid part of it & reschedule the rest for later».

Syria has provided some of the various goods pro-quo as it was the way to pay on the days of the Soviet Union.

(It’s well known that the Soviet Union used to provide its allied countries with material support of various equipment in exchange for a little money and a lot of goods or products or raw materials, for example, the Soviet Union provide the communist Cuba for years, military support, equipment, machinery & tractors in exchange with agreed quantities of sugar and Cuban Cigar).

The former Russian chief of staff concludes by saying «only the wisdom of President Assad in dealing with Yeltsin, helped Russia, otherwise Russia could’ve been lost Syria, with Syria is important & loyal ally for Russia in the region».

Its well known that, according to the Russian mentality, over the years ((the Russian cannot trust those who booed and fought against it in the past & the issue of building bridges of trust to cooperate with the enemies of yesterday marred by a lot of mistrust & extreme caution, thus what makes the idea of full Russian openness to these countries very difficult & require extra efforts with somehow long-term procedures & policies to restore confidence & rebuild trust)) of course, this applies to many countries, but in the case of Syria, Syria remained faithful & loyal for years & there are deeply rooted relations between the two countries.

Returning to this episodic Syrian tale, which reached to the current crisis, with President Bashar Al-Assad rejected the Triple Qatari, Turkish French plan, it seems to be that, the sense of lack of confidence & insecure starts to run in Bashar Al-Assad & his advisers veins.

Certainly, whoever knew Syria’s foreign policy since the era of Hafez al-Assad until the reign of his son realizes that Syrian President Bashar Al-Assad had reached up to conviction of the impossibility of drawing & building a new modern policy by opening up to some countries that his father was in the past, careful to the point of reluctance to open up on them, as a result of lack of confidence or sense of danger towards these countries, with always keep certain distance with each of these countries & with the policy of the father in the hands of the Son, the young president returned to the foreign policy of his father, specifically when the Russian President Dmitry Medvedev visited Syria in 2010.

President Bashar Al-Assad surprised Medvedev, by opening the issue of the renewal of the investment Tartous Coast contract, which was signed in the seventies between the late Syrian President Hafez Al-Assad & the Soviet leader the late Leonid Brezhnev.

(This signed agreement gave the Soviet Union the privilege of benefit & use the port of Tartous & build a Soviet bases where the Soviet fleet maintenance & Supply in addition to the Soviet need to keep the wars in the port of the Mediterranean Sea & allow the USSR to maintain balance with the United States, where the US sixth fleet wander & frolic in the Mediterranean Sea & the fifth fleet in the Persian Gulf, with a number of not insignificant military bases in all Gulf Arab states, without exception).

The Words of Assad was a surprise to the Russian president when Assad said that «the agreement had been frozen by time passes due to the death of two leaders, who signed it & thus The Government of the Syrian Arab Republic has no objection & would like to renew this agreement & enhancing it for the benefit & in the interests of the two countries».

Medvedev asked Assad to give him some time until the next morning to talk & do consultations with Moscow, he intended here that he needs to talk with Vladimir Putin, the leader of the ruling United Russia party & the prime minister at the time, Medvedev talked to Putin by phone at night, with both Putin & Medvedev agreed to go for this issue & to renew the agreement with Syria & move forward to continue full cooperation, & the Agreement had been renewed.

This was an important step & significant achievement which is calculated to Assad’s account, he managed entrench the historical relations with Russia by this move & solid maintain the stability & solidity in the relations with Russia, with Russia also gained an important foothold & a solid foot on the shores of the Mediterranean & the Middle East & certainly, the news of this deal & this step has an undesirable echo at all Western countries USA & NATO), & probably it created some concerns in Israel too & what appear to be the move that will open the gates of hell on Syria & the entire region.