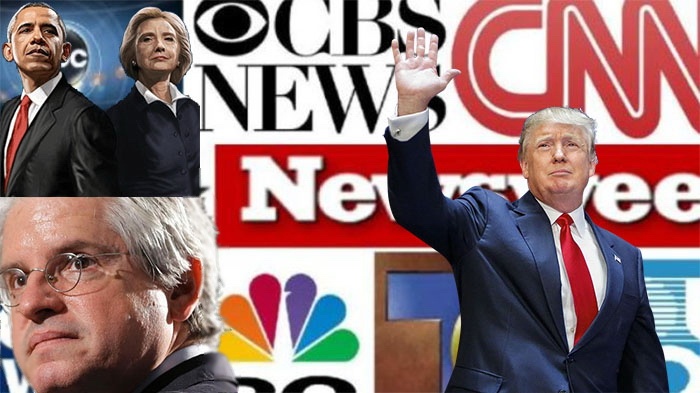 The campaign waged against the new President of the United States by the sponsors of Barack Obama, Hillary Clinton and the destruction of the Greater Middle East is on-going. After the Womens’ March on 22 January, a March for Science is scheduled to be held not only in the USA, but also throughout the Western world on 22 April. It’s goal is to show that Donald Trump is not only a misogynist, but also an obscurantist.

The fact that he is the ex-organiser of the Miss Universe pageant, and that his third wedding was to a model, is apparently enough to prove that he holds women in contempt.

The fact that the President contests the rôle played by Barack Obama in the creation of the Chicago Climate Exchange (a long time before his Presidency) and rejects the idea that climatic disturbances are caused by the expulsion of carbon into the atmosphere attest to the fact that he understands nothing about science.

In order to convince US public opinion of the President’s insanity – a man who says that he hopes for peace with his enemies, and wants to collaborate with them in universal economic prosperity — one of the greatest specialists of agit-prop (agitation & propaganda), David Brock, set up an impressive system even before Trump’s investiture.

At the time when he was working for the Republicans, Brock launched a campaign against President Bill Clinton which would eventually become Troopergate, the Whitewater affair, and the Lewinsky affair.

Having changed his colors, he is today in the service of Hillary Clinton, for whom he has already organized not only the demolition of Mitt Romney’s candidacy but also her riposte in the affair of the assassination of the US ambassador in Benghazi.

During the first round of primaries, it was Brock who directed the attacks against Bernie Sanders.

So Watergate was entirely managed by a certgain «Deep Throat» who, 33 years later, was revealed to be Mark Felt, the assistant of J. Edgar Hoover, Director of the FBI.

As for the Lewinsky affair, it was simply a way of forcing Bill Clinton to accept the war against Yugoslavia.

The current campaign is organised in secret by four associations:

Media Matters is tasked with picking up on Donald Trump’s mistakes. You read his bulletin every day in your newspapers – the President can’t be trusted, he got this or that point wrong.

American Bridge 21st Century has collected more than 2,000 hours of videos showing Donald Trump over the years, and more than 18,000 hours of other videos of the members of his cabinet.

It has at its disposition sophisticated technological equipment designed for the Department of Defense – allegedly not in working order – which enables it to look for contradictions between their older declarations and their current positions.

It should be extending its work to 1,200 of the new President’s collaborators.

Citizens for Responsibility and Ethics in Washington — CREW is a firm of high level lawyers tasked with tracking anything that could create a scandal in the Trump administration.

Most of the lawyers in this association work pro bono, for the cause.

These are the people who prepared the case for Bob Ferguson, the Chief Prosecutor of the state of Washington, against the immigration decree (Executive Order 13769).

Shareblue is an electronic army which has already connected with 162 million internauts in the USA.

It’s job is to spread pre-ordained themes, for example:

• Trump is authoritarian and a thief.
• Trump is under the influence of Vladimir Putin.
• Trump is a weak and quick-tempered personality, he’s a manic-depressive.
• Trump was not elected by the majority of US citizens, and is therefore illegitimate.
• His Vice-President, Mike Pence, is a fascist.
• Trump is a billionaire who will constantly be faced with conflicts of interest between his personal affairs and those of state.
• Trump is a puppet of the Koch brothers, who are famous for sponsoring the extreme right.
• Trump is a white supremacist and a threat to minorities.
• Anti-Trump opposition just keeps growing outside Washington.
• To save democracy, let’s support the democrataic parliamentarians who are attacking Trump, and let’s demolish those who are co-operating with him.
• Overthrowing Trump will take time, so don’t let’s weaken in our resolve.

This association will produce the newsletters and 30-second videos.

It will base itself on two other groups – a company which makes documentary videos, The American Independent, and a statistical unit, Benchmark Politics.

The whole of this system – which was set up during the transitional period, that is to say before Donald Trump’s arrival at the White House – already employed more than 300 specialists to which should be added numerous voluteer workers.

Destroying the image – and thus the authority – of the President of the United States, before he has had the time to do anything at all, can have serious consequences.

By eliminating Saddam Hussein and Mouamar Kadhafi, the CIA plunged their two countries into a long period of chaos, and the «land of Liberty» itself may suffer severe damage from such an operation.

This type of mass manipulation technique has never before been levelled at a head of state in the Western world.

For the moment, the plan is working – no political leader in the world has dared to celebrate the election of Donald Trump, with the exception of Vladimir Putin and Mahmoud Ahmadinejad.