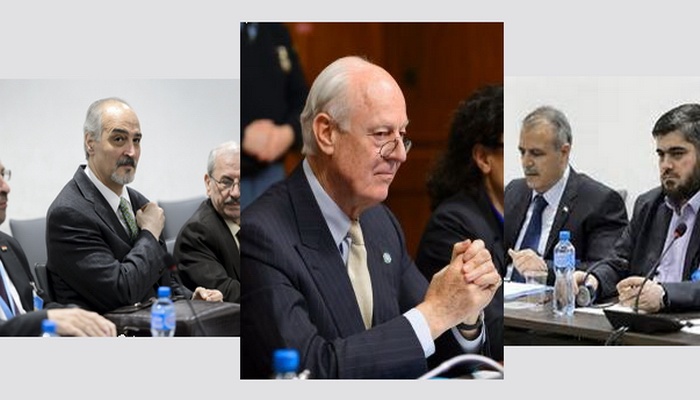 Opposition delegates attending the Geneva-4 peace talks would do well to heed the UN envoy’s – and Russia’s – advice.

UN envoy Staffan De Mistura was right to warn Syrian opposition delegates at the ‘Geneva-4’ conference that the failure of the talks would mean a repeat of the Aleppo scenario in Idlib, stronghold of ‘extremist’ and ‘moderate’ armed groups alike. For it was the failure of the Geneva-3 conference, and the political histrionics that preceded and accompanied it, which gave the Syrian-Russian-Iranian alliance the green light to recapture Aleppo in its entirety, thereby bringing the Syrian crisis to a turning-point.

The UN envoy is well informed and knows much about plans cooked up behind closed.

Hence the unsolicited advice he gave to the opposition and the hardline armed groups in eastern Aleppo to evacuate to safe zones in Idlib or elsewhere in order to avoid being routed.

He even offered to accompany them himself to ensure their safety.

But rather than heeding his advice and taking it seriously, and avoiding defeat and much bloodshed, he was subjected to a campaign of vilification and abuse, accompanied by slogans about holding out and fighting on to the death.

The Syrian government delegation headed by Bashar Al-Jaafari, the regime’s diplomatic super-hawk, would be delighted if the Riyadh-based opposition delegation would lose patience and announce it was walking out of the Geneva talks, as happened on previous occasions.

Indeed, he could well be doing his best to achieve that outcome.

This may explain why both sides have been stressing that there is no question of withdrawing from the talks, at least for the time being, and showing an unusual amount of self-control and restraint.

But this may not last – nature could ultimately overcome nurture.

Meanwhile, with his stern warnings, the UN envoy has managed to achieve three things in the opening days of the negotiations.

First, he compelled the Riyadh-based High Negotiations Committee (HNC) to accept the attendance of the Cairo and Moscow opposition platforms, thus ending its status as sole representative which it had managed to impose on previous gatherings.

Secondly, De Mistura obliged the HNC delegation to condemn the bombing by the Tahrir ash-Sham (formerly the Fateh ash-Sham or Nusra front) in Homs – in which 30 members of the regime’s forces including two high-ranking officers were killed – as a terrorist action aimed at wrecking the Geneva talks.

He insisted on this, and got his way.

Third, the UN envoy demanded that the HNC delegation and its leaders, Muhamad Alloush and Nasser al-Hariri, retract their statements that Asad can have no role in transitional arrangements or in Syria’s future.

The statements were unreservedly withdrawn.
Russia — which the opposition used to see as biased towards the regime or even an occupying power – has become the main player at the Geneva talks and their ultimate arbiter in the conspicuous absence of the United States.

This is why the opposition delegates, as Hariri said, are counting on their scheduled meetings with Russia officials to persuade Moscow to press the regime to enter into direct political negotiations on all issues. This is a total and unprecedented turnaround.
The outlines of the kind of political solution that could emerge from such negotiations were alluded to in two statements made on Monday by, respectively, Russian President Vladimir Putin’s Middle East envoy Mikhail Bogdanov, and Jihad al-Maqdisi, head of the Cairo platform’s delegation at the Geneva conference.
Bogdanov told the Vilnai discussion forum that ‘the Syrian regime should be neither Sunni nor Alawi nor any other but a secular one, and the regime should be set up through democratic procedures… which means conducting elections, so that the Syrian people living in Syria, as well as refugees who have the right to vote, could choose their new government’.

He also dismissed, and ridiculed, opposition demands for the regime to be removed from power.
Maqdisi, one of the most independent opposition delegates in Geneva, for his part said that a military solution was completely out of the question following the recovery of Aleppo, and did not rule out Asad remaining president during the transitional period.

He stressed that the priority must be to end the war rather than to replace certain individuals by others, and insisted that there should be no preconditions for talks – including removal of the president.
Russia’s proposals, which De Mistura has largely adopted, are imposing themselves on the Geneva conference and turning into the ground-rules for a political settlement, while those of the Riyadh-based opposition, and its demand that Asad must go, are in retreat.

The coming few days could see the formation of a unified opposition delegation – comprising the Riyadh, Cairo and Moscow platforms – to begin a first round of direct negotiations with the official Syrian delegation.
The alternative to that is terrifying to contemplate.
UN envoy De Mistura said it frankly to the opposition; the conference’s failure will prompt the Syria president to devastate and regain Idlib as he did Aleppo.

He thus threw the ball into its court.

It seems likely that his advice –not to say threat – will be heeded this time.
Vladimir Putin is now in the driving seat in Syria and the Middle East region as a whole.

Any attempt to eject him or spoke his wheels by his American counterpart Donald Trump and his new Turkish ally Recep Tayyep Erdoğan would be a highly risky gambit.