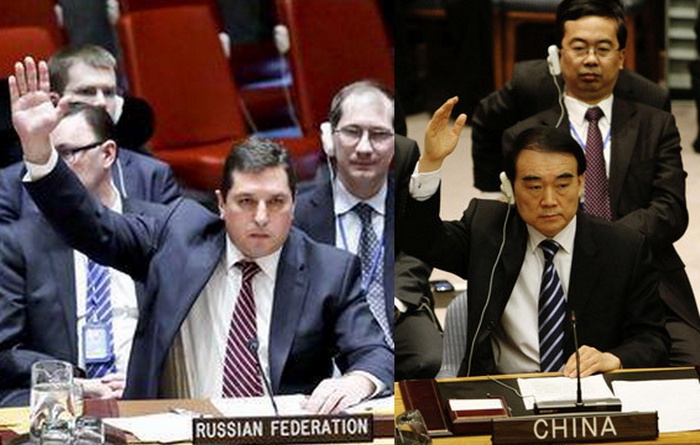 Russia on Tuesday cast its seventh veto to protect the Syrian government from United Nations Security Council action, blocking a bid by Western powers to impose sanctions over accusations of chemical weapons attacks during the six-year Syrian conflict.

China backed Russia and cast its sixth veto on Syria. Russia had said the vote on the resolution, drafted by France, Britain and the United States, would harm U.N.-led peace talks between the warring Syrian parties in Geneva, which began last week.

Nine council members voted in favor, Bolivia voted against, while Egypt, Ethiopia and Kazakhstan abstained. A resolution needs nine votes in favor and no vetoes by the United States, France, Russia, Britain or China to be adopted.

«For my friends in Russia, this resolution is very appropriate», U.S. Ambassador to the United Nations Nikki Haley told the council after the vote.

«It is a sad day on the Security Council when members start making excuses for other member states killing their own people. The world is definitely a more dangerous place», she said.

The vote was one of the first confrontations at the United Nations between Russia and the United States since U.S. President Donald Trump took office in January, pledging to build closer ties with Moscow.

Russia’s Deputy U.N. Ambassador Vladimir Safronkov described the statements made against Moscow in the Security Council as «outrageous» and declared that «God will judge you».

«Today’s clash or confrontation is not a result of our negative vote.

It is a result of the fact that you decided on provocation while you knew well ahead of time our position», said Safronkov.

Western powers put forward the resolution in response to the results of an investigation by the U.N. and the Organization for the Prohibition of Chemical Weapons (OPCW).

British U.N. Ambassador Matthew Rycroft told the council before the vote: «This is about taking a stand when children are poisoned.

It’s that simple, It’s about taking a stand when civilians are maimed and murdered with toxic weapons».

Chlorine’s use as a weapon is banned under the Chemical Weapons Convention, which Syria joined in 2013.

If inhaled, chlorine gas turns to hydrochloric acid in the lungs and can kill by burning lungs and drowning victims in body fluids.

Russia has questioned the results of the U.N./OPCW inquiry and long said there was not enough proof for the Security Council to take any action.

French U.N. Ambassador Francois Delattre said the failure by the council to act would «send a message of impunity».

China’s U.N. Ambassador Liu Jieyi said it was too early to act because the international investigation was still ongoing.

«We oppose the use of chemical weapons», he said.

It also proposed targeted sanctions — a travel ban and asset freeze — on 11 Syrian military commanders and officials, as well as on 10 government and related entities.