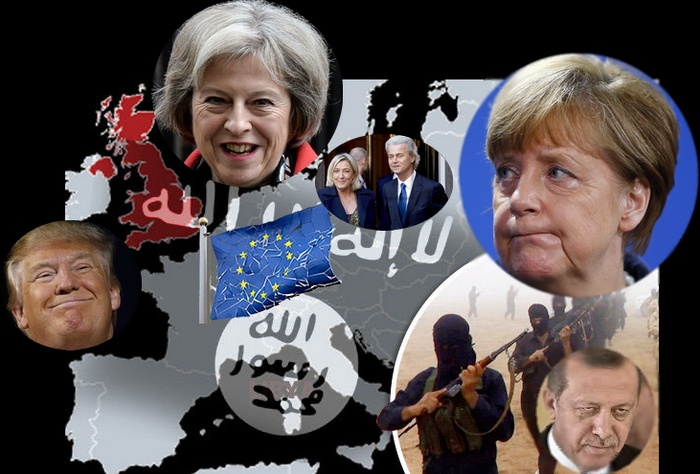 The German Chancellor Angela Merkel expressed her deep concern about the future of the European Union, this statement by Chancellor Merkel was on the sidelines of the Munich Security Conference, which was held in 19-17 of February.

Based on a report published by an American «Mint Press» Journal, that the German Chancellor had predicted a chaotic future of the European Union also it was obvious that «the EU pillars are almost collapsing», as she described.

According to the report, the German Chancellor described the policy that the Turkish president is adopting, by trapping 2,500 terrorists from «Daesh» in a European countries, beside supporting the project of all Europe right-wing parties, so, with that, the both will be like a «scissors which will eliminate the presence of the European Union».

According to secret information leaked from the sidelines of the Munich conference on security reports that after the Iraqi army control of Tal Afar, and close the withdraw path of the «Daesh» members, there are already 2500 «Daesh» members has already left from Mosul heading to the Turkish territory to be settling in camps supervised by the Turkish security authorities with a green light from the Turkish President Recep Tayyip Erdogan himself.

These information shows that, the Turkish security authorities are seeking for an agreement with the Americans and British officials to provide a suitable ground for those members to go to Afghanistan and Libya, as these authorities are planning to send a number of others, to European Union countries.

In the context to that, many major security analysts believes, that Britain and the United States, by invoking the policy of «Daesh» threats and amplify it’s risks, are trying to provide more support for the extreme right-wing European parties so that they provide a suitable ground for the collapse of the European Union.