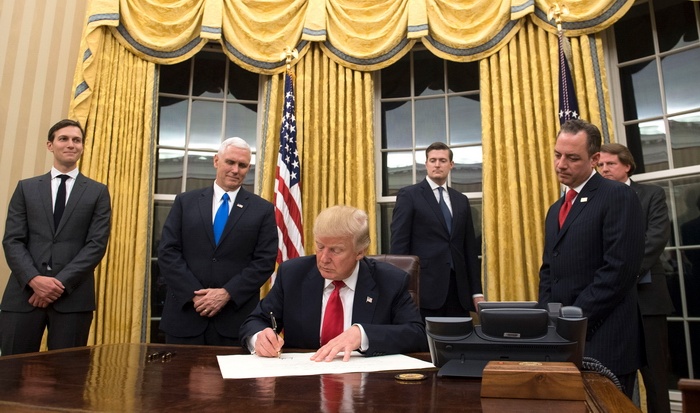 President Donald Trump is seeking what he called a «historic» increase in defense spending, but ran into immediate opposition from Republicans in Congress who must approve his plan and said it was not enough to meet the military’s needs.

The proposed rise in the Pentagon budget to $603 billion comes as the United States has wound down major wars in Iraq and Afghanistan and remains the world’s strongest military power.

The plan came under fire from Democratic lawmakers, who said cuts being proposed to pay for the additional military spending would cripple important domestic programs such as environmental protection and education.

A White House budget official, who outlined the plan on a conference call with reporters, said the administration would propose «increasing defense by $54 billion or 10 percent».

That represents the magnitude of the increase over budget caps Congress put in place in 2011.

But Mick Mulvaney, the White House budget director, said the plan would bring the Pentagon’s budget to $603 billion in total, just 3 percent more than the $584 billion the agency spent in the most recent fiscal year, which ended on Sept. 30, 2016.

The rise would be slightly higher than the country’s current 2.5 percent rate of inflation.

«President Trump intends to submit a defense budget that is a mere 3 percent above President (Barack) Obama’s defense budget, which has left our military underfunded, undersized, and unready to confront threats to our national security», John McCain, the Republican chairman of the Senate Armed Services Committee, said in a statement.

The defense boost would be balanced by slashing the same amount from non-defense spending, including a large reduction in foreign aid, the White House budget official said.

Trump does not have the final say on federal spending. His plan for the military is part of a budget proposal to Congress, which, although it is controlled by his fellow Republicans, will not necessarily follow his plans.

McCain told reporters he would not vote for a budget with the slight military increase and thought it would face opposition in the Senate.

Trump told state governors at the White House his budget plan included a «historic increase in defense spending to rebuild the depleted military of the United States of America».

He said his proposal was a «landmark event» and would send a message of «American strength, security and resolve» to other countries.

Officials familiar with Trump’s budget blueprint said the plan would call for cuts to agencies including the State Department and the Environmental Protection Agency.

One official familiar with discussions over State’s budget said the agency could see spending cut by as much as 30 percent, which would force a major department restructuring and elimination of programs.

The United States spends about $50 billion annually on the State Department and foreign assistance.

Trump has vowed to spare middle-class social programs such as Social Security and Medicare from any cuts.

Nancy Pelosi, the top Democrat in the House of Representatives, said Trump’s plan to slash funding for federal agencies to free up money for the Pentagon showed he was not putting American working families first.

«A $54 billion cut will do far-reaching and long-lasting damage to our ability to meet the needs of the American people and win the jobs of the future,» Pelosi said «The president is surrendering America’s leadership in innovation, education, science and clean energy».

An official familiar with the proposal said Trump’s request for the Pentagon included more money for shipbuilding, military aircraft and establishing «a more robust presence in key international waterways and choke points» such as the Strait of Hormuz and South China Sea.

That could put Washington at odds with Iran and China. The United States already has the world’s most powerful fighting force and it spends far more than any other country on defense.

About one-sixth of the federal budget goes to military spending.

He has not said where he would place the extra hardware and forces or made clear what they would be used for. The United States has been shutting some of its military bases in recent years.

Trump has also said he would bolster the development of missile defenses and cyber capabilities. Last week, he told Reuters the United States had «fallen behind on nuclear weapon capacity».

He pledged to ensure that «we’re going to be at the top of the pack».