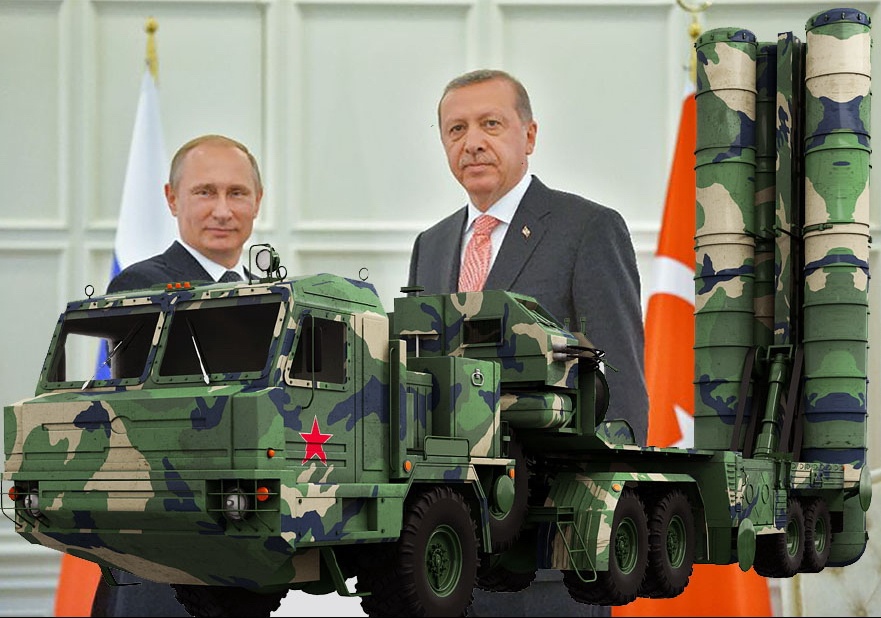 The preparation of the upcoming visit of the Turkish President Recep Tayyip Erdogan to Russia is taking place recently, for the visit which is expected to be next month.

What raised eyebrows with decent amount of puzzling, the fact about the idea of Turkey’s request to purchase the S400 missiles system from Russia, & is this request was made before the recent events or before.

No mistrust, but even though some caution is required when you deal with Turkey because its government mood changing which is happened more often.

The recent signs that appears in the light of some directions & statements of the Turkish government give us some hints of a possible turn back to the NATO & US direction.

It’s the idea of the US President Donald Trump about reviving the Sunni alliance in the Middle East, that Turkey would be an active player in it to face of Iran, especially after the last visit of the Turkish President to Qatar, Bahrain, Saudi Arabia & the issuance of comments & permits from the Turkish President & Turkish officials which they speak with the tongue of their president, against Iran.

The recent Turkish comments regarding Iran & the role that Iran is playing & doing in the Middle east which is about Iran ambitions & personal Agenda that Iran is trying to apply in the flaming region with its interference in the internal affairs of countries in the region based on the Turkish officials words.

Turkey is blaming & throwing accusation against Iran, like that Turkey doesn’t have its own personal agenda in the Region, when all facts shows the clear & very visible Turkey’s getting involved in all the internal affairs of almost entire middle east countries especially in this past six years after the so called Arab Spring, not only that but almost found itself in front of the Russian Bear after the Russian Bomber aircraft shutdown incident.

The recent Turkish statements & politically attacking Iran was received by the Iranian government with bitter as it seems.

The Iranian news agency «Tasnim» quoted him saying in an interview with the «Iran today newspaper»: «It seems that our friends memory is weak, they accuse the Islamic Republic of Iran as if they forgot our position on the night of the recent military coup took place, & how we stayed & followed the situation until the morning, although it’s not a Shiite government.

Their memories are weak & they quickly deny the favors of who presented them to be supplemented, & deal with them affectionately».

He said that the policy of the Republic «in the region is stand stable & successful», he also added: «Everyone knows that our foreign policy is an effective & decisive in the region, while the parties whose policies have failed in this area raise noise in the hope of policy adopted by US President Donald Trump direction».

He said: «Everyone knows that the current situation in our region are utmost gravity, & their policies are the cause of it».

It was Erdogan who said during the recent visit to Bahrain that «Iran is seeking to divide Iraq, Syria & acting national perspectives,» while Jawish oglu said that «the Iranian role in the region, destabilizing, especially that Tehran is seeking to spread Shiism in Syria & Iraq».

If the Turkish-Iranian situation as well as how it is with Russia?

How Russian President Vladimir Putin looks at the course of events & what is expected?

Change in Turkey’s position & if it’s really happened, how the Russian position will be?

Historically, Turkey’s political positions are fickle, which made it impossible for them to maintain a permanent & stable relations with its neighbors, which makes it difficult to predict trends that the Turkish leadership intends to walk towards it.

apparently the concept of Zero Problems of Turkey’s relations with its neighbors was just a «Morphine injection» to serve temporarily for specific goals or interests on certain time.

Practically the Turkish request from Russia for the S400 missile system may be feelers or some kind of Turkish manipulation in the relationship with Russia, a process, we do not want nor assume mistrust.

«But is it possible that Russia would provide a NATO member, one of its famous trademarks of its Russian military»?

If this deal is really serious & there is an intention to work for strike that deal So, what are the hidden node in the network of relationships between many countries in the region?

Turkey is now living the euphoria of the achievement that been made on the ground after the control of its troops & their supported troops of the «Shield of Euphrates» to control the city Al-Bab south eastern Aleppo, that will open the field, which was announced already by the Turkish government on the subject of the upcoming plans, which Turkey aspires to progress to control other areas that extends to the city of Raqqa the prospect last stronghold of the Islamic State in the light of the recent defeats in many areas which was clear for the naked eye that the Days of the (ISIS or Daesh or Islamic State or the state of caliphate), name it whatever you want, the fact is their days are numbered.

Of course on the ground & by the recent situation on the maps on the field, this Turkish plan to continue is very far from being that simple, in fact it’s difficult in terms of the problem of inevitable collision with the «Syria’s democratic forces» that It’s consists basically of Kurdish forces-backed by the United States, in addition to the progress that been made in the past couple of days by the Syrian government forces, which were able to control an important areas of the southern countryside east of Aleppo, which is the road, which the Turkish Troops & their «Shield of Euphrates» must take & control if they wants to achieve what they are saying.

The «Shield of Euphrates» operation, which began about three months ago, were not easy & it didn’t came without costs, with more than 60 Turkish Soldiers died with some number of injuries, beside large number of casualties in the «Shield of Euphrates», which consist of Syrian opposition forces, that usually have the name of the «Free Syrian Army».

Adding to the human loss, the large material losses in gear with the need for the Turkish government to handle the responsibility in one way or another, the duties of area management & control with the necessity of securing the population & the necessary supplies with tasks of maintaining security in all the area that been under their control.

A couple of days ago the Islamic State attacks in to areas near to Al-Bab city by using car bombs, killing more than 62 people & wounding dozens, with some Turkish soldiers among them as well.
The outcome of the matter is that Turkey is entering a period full of events & twists, that require a lot of caution & attention from Turkish government to avoid extra load on their shoulders which are already full.