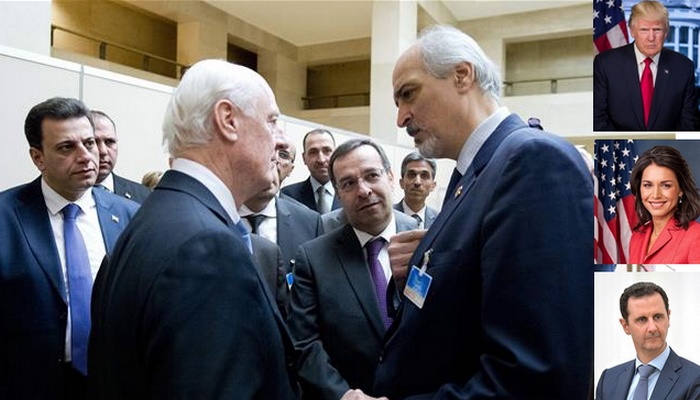 Syrian opposition groups delegation entered in the Geneva 4 negotiations, to meet with the UN envoy Staffan de Mistura and is afraid of the unpleasant news, confirmed to him on the morning of Friday, from private sources in the United Nations headquarters in Geneva.

these unpleasant news was, that the American lawmaker Tulsi Gabbard from the democratic party who recently secretly visited Damascus and met with Syrian President Bashar al-Assad carried with her to Washington a message from Assad to Trump about the Syrian issue in general and that Trump received this message from his counterpart Assad positively, and Syrian dissidents in Washington told a number members of the Riyadh delegation of the Syrian opposition to Geneva 4 meetings, that Americans have information that Trump positively abuse the message of his Syrian counterpart Bashar al-Assad which may possibly affect Trump’s policy toward the Syrian file negatively on the opposition and positively on the Syrian government.

Opposition fears were reinforced after the United States froze military aid to the opposition militias northwest Syria, which was coordinated by the CIA.

De Mistura was waiting at morning outside the A13 of the United Nations building in Geneva to receive the Syrian government delegation negotiating team, headed by Ambassador Bashar Jaafari.

The Syrian government delegation had held a session of talks with de Mistura continued for two hours after Jaafari went out to the journalists revealed that the Syrian delegation had received from de Mistura, a paper and that he would discuss this paper and will respond in the next with the meeting, which will be scheduled later through diplomatic channels, according to al-Jaafari told reporters.

Al-Jaafari said: We discussed during the talks session with de Mistura the future of the upcoming meetings of the form I mean the issues related to a sessions only.

In a related context, the Syrian government delegation seems comfortable without any pressure and insist on an item key to the negotiations which is fighting terrorism item by all other items, that are mentioned, with that he will not hold direct negotiating meetings between the Syrian government delegation and delegations of the opposition and that the meetings will continue indirectly mediated by envoy Staffan de Mistura.