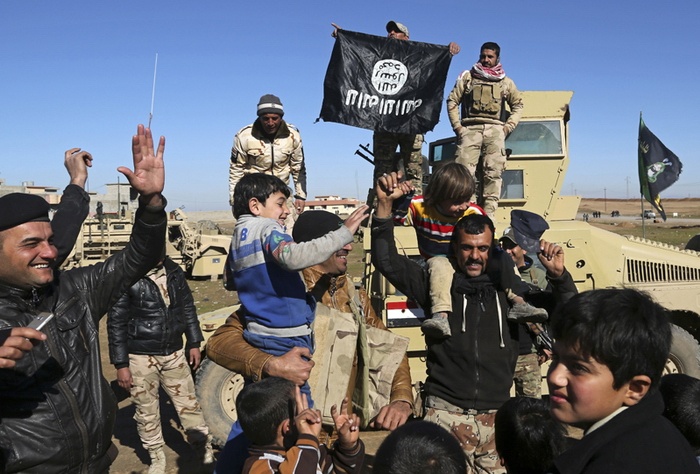 «The bridge is very important,» Colonel Falah al-Wabdan of the Interior Ministry’s Rapid Response unit, one of the two main forces spearheading the campaign in western Mosul, told Reuters.

«The bridge is about 400 meters away. By the end of the day you will hear that our forces have arrived (there)».

Army engineers plan to rehabilitate the bridge to allow troops to bring in reinforcements and supplies directly from the eastern side, he said.

They launched their attack on the districts that lie west of the Tigris a week ago.

If they defeat Islamic State in Mosul, that would crush the Iraq wing of the caliphate that the group’s leader Abu Bakr al-Baghdadi declared in 2014 over parts of Iraq and neighboring Syria.

The U.S. commander in Iraq has said he believes U.S.-backed forces will recapture both Mosul and Raqqa — Islamic State’s Syria stronghold — within six months.

Hundreds of people have fled the fighting in the direction of government lines since Thursday, at least 1,200 of them in the early hours of Sunday, according to a CTS officer.

Of those, several dozen had been forcibly taken into Mosul in the early stage of the offensive from nearby regions to serve as human shields.

«We want to return to our home in Mafraq al-Qayyara», south of Mosul, said 28-year-old Mohammad Allawi Zeidan, as he walked with a group of two dozen people on an agricultural road between Mosul airport and the Tigris river nearby.

He said they were held hostage in Hawi al-Josaq, a riverside district that the Rapid Response unit is trying to capture on its way toward the bridge.

Islamic State forced tens of thousands of people to leave villages south of Mosul and walk alongside the jihadists as they retreated in late October toward the city.

Thousands of them were freed in earlier stages of the offensive.

Iraqi troops have already captured the southern and western accesses to western Mosul, dislodging the militants from the airport, a military base, a power station and one residential district, al-Maamoun, according to military statements.

Commanders say they will soon complete the recapture of two others residential district, al-Tayyaran and Hawi al-Josaq.

They are currently about three kilometers (2 miles) from the old city center and the main government buildings, the capture of which would effectively mean the fall of Mosul.

Iraqi commanders expect the battle to be more difficult as they get closer to the old city in part because tanks and armored vehicles cannot pass through its narrow alleyways.

Several thousand militants, including many who traveled from Western countries to join up, are believed to be holed up in the city with practically nowhere to go, which could lead to a fierce standoff amid a remaining civilian population of 750,000.

They are facing a 100,000-strong force made up of Iraqi armed forces, regional Kurdish peshmerga fighters and Iranian-trained Shi’ite Muslim paramilitary groups.

The militants have developed a network of passageways and tunnels to enable them to hide and fight among civilians, melt away after hit-and-run operations and track government troop movements, according to inhabitants.

A resident of Hawi al-Josaq who gave his name as Mohammed said the troops need to inspect each house to ensure no militants remained.

«Even if they just kill one soldier they consider themselves victorious», he said, as he took a jug of milk from a boy at the door. He said the family had been living on milk and bread for the last two weeks as they were unable to go to the market.

Sniper, machine gun and mortar fire could be heard. A soldier said fighting in the blocks further north was going from house to house.

The United Nations says up to 400,000 people may have to leave their homes during the new offensive as food and fuel runs out in western Mosul. Aid groups warned on Friday that the most dangerous phase of the offensive was about to begin.

The government is encouraging residents to stay in their homes whenever possible, as they did in eastern Mosul where fewer people fled than expected.