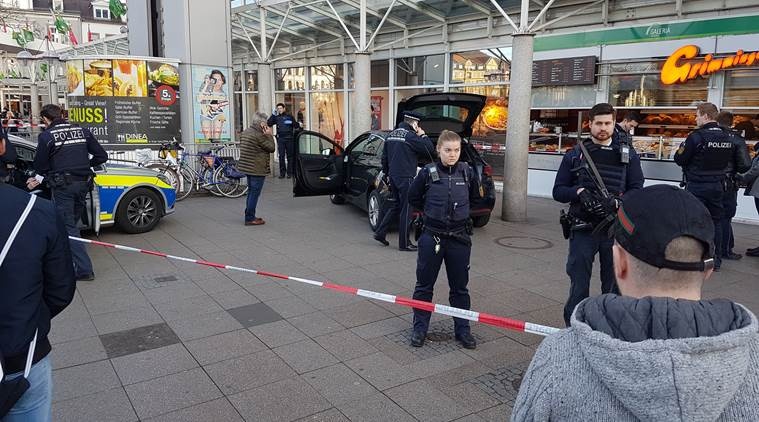 A man died and two other people were injured after a 35-year-old German man drove into a crowd standing near a bakery in the southwestern town of Heidelberg on Saturday, but the authorities said there were no indications that it was a terrorist attack.

The 73-year-old man who died in hospital from his injuries was also German.

The two other people injured, a 32-year-old Austrian man and a 29-year-old woman from Bosnia and Herzegovina, also received hospital treatment but were then discharged, police and prosecutors said in a statement.

«Based on investigations so far, there are no signs of a terrorist motive», they said.

According to the statement, the suspect was seen getting out of the car with a knife and was later tracked down to an old swimming pool. He was taken to a hospital in Heidelberg having been shot by police while being arrested, leaving him seriously injured.

He has since been operated on but nothing further is known about the current state of his health, the police and prosecutors said.

Regional newspaper Rhein-Neckar-Zeitung said the suspect was not fit to be questioned.

Police spokesman Heiko Kranz said experts were gathering evidence such as DNA traces and fingerprints and examining the contents of the car, adding that the suspect would be interviewed if he was fit to be questioned.

Investigations by the public prosecutors’ office in Heidelberg and the town’s criminal police were continuing, police said.

The Rhein-Neckar-Zeitung newspaper said the suspect had stopped at a red traffic light and when it turned green put his foot down before hitting the group of people at high speed and smashing into a pillar.

The German authorities are on high alert after a failed Tunisian asylum-seeker drove a truck into a Christmas market in Berlin on Dec. 19, killing 12 people.