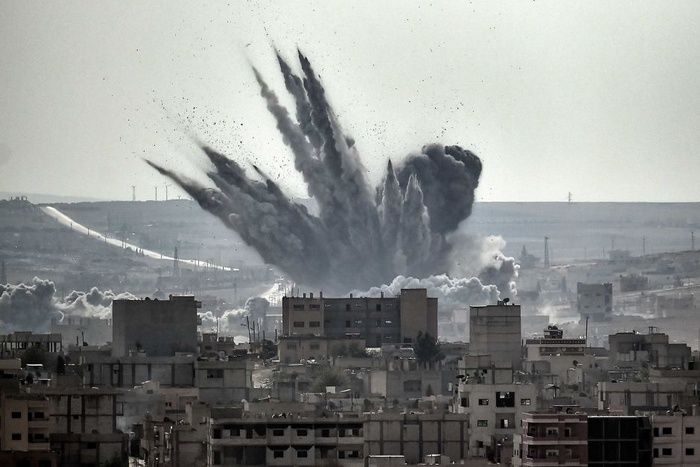 A United Nations peace envoy said a militant attack in Syria on Saturday was a deliberate attempt to wreck peace talks in Geneva, while the warring sides traded blame and appeared no closer to actual negotiations.

Suicide bombers stormed two Syrian security offices in Homs, killing dozens with gunfire and explosions including the head of military security, prompting airstrikes against the last rebel-held enclave in the western city.

«Spoilers were always expected, and should continue to be expected, to try to influence the proceedings of the talks. It is in the interest of all parties who are against terrorism and are committed to a political process in Syria not to allow these attempts to succeed», U.N. mediator Staffan de Mistura said in a statement.

De Mistura has met the two sides separately in Geneva while he tries to get agreement on how talks to end the six-year-old conflict should be arranged.

He has warned not to expect any quick breakthrough and to beware of letting the violence derail any fragile progress, as happened repeatedly in the past.

A ceasefire brokered by Russia and Turkey with Iran’s support is increasingly being violated by both sides.

The jihadist rebel alliance Tahrir al-Sham, which opposes the talks — although it has fought alongside factions that are represented there — said that five suicide bombers had carried out Saturday’s attack.

It celebrated with the words «thanks be to God» but stopped short of explicitly claiming responsibility.

Tahrir al-Sham was formed this year from several groups including Jabhat Fateh al-Sham, which was formerly known as the Nusra Front and was al Qaeda’s Syrian branch until it broke formal allegiance to the global jihadist movement in 2016.

After a 2-1/2 hour-long meeting with de Mistura, the Syrian government’s lead negotiator Bashar al-Ja’afari spoke to reporters and repeatedly demanded the opposition condemn the attacks or face the consequences.

«If anyone refuses to condemn this terrorist attack then he is an accomplice of terrorism and we will deal with them accordingly», Ja’afari said.

He ruled out leaving the talks, saying he would meet de Mistura again on Tuesday, but he implied that some of the opponents that he had sat face-to-face with at Thursday’s opening ceremony were «sponsors of terrorism».

Warplanes also carried out six raids on Douma in the eastern suburbs of Damascus, resulting in six deaths, and earlier, an air raid in Hama killed four people from the same family, the Syrian Observatory for Human Rights said.

Speaking to Reuters earlier on Saturday, Basma Kodmani, a negotiator from the opposition High Negotiations Committee (HNC), said groups backing the talks had abided by the ceasefire.

But she questioned the government’s commitment and whether Russia, a key Assad ally, was ready to pressure it to curb the violence.

After Ja’afari’s comments, the opposition condemned the attack but accused the government of trying to use the events to derail the negotiations.

«We condemn all terrorist acts done by all terrorist groups. If the Homs operation was done by any of those, it is clear what I say», lead negotiator Nasr al-Hariri told reporters.

«They just want to remain in power. The regime is trying to block the negotiations», he added, saying they would not walk away from the talks.

Colonel Fateh Hassoun, a member of the opposition negotiating team, pointed the finger squarely at the government forces for the Homs attack.

«What happened today is an operation the regime has implemented to retaliate through another action against civilians besieged for the past 3-1/2 years, and this is to send a message to the people, societies and the world that he is fighting terrorism», he said.

Although Assad’s government has controlled most of Homs since 2014, rebels still control its al-Waer district, which warplanes bombed on Saturday, wounding 50, the Observatory said.

De Mistura handed a working paper on procedural issues to delegations at the talks on Friday but there appears little prospect of things moving to the key political issues that he had hoped to be able to begin addressing.

The envoy is looking to lay the foundations for negotiations to end the conflict that has killed hundreds of thousands and displaced millions.

«In reality, nothing is happening”, said a senior Western diplomat. „The paper handed out yesterday by de Mistura is procedural. It is not the future of Syria“.