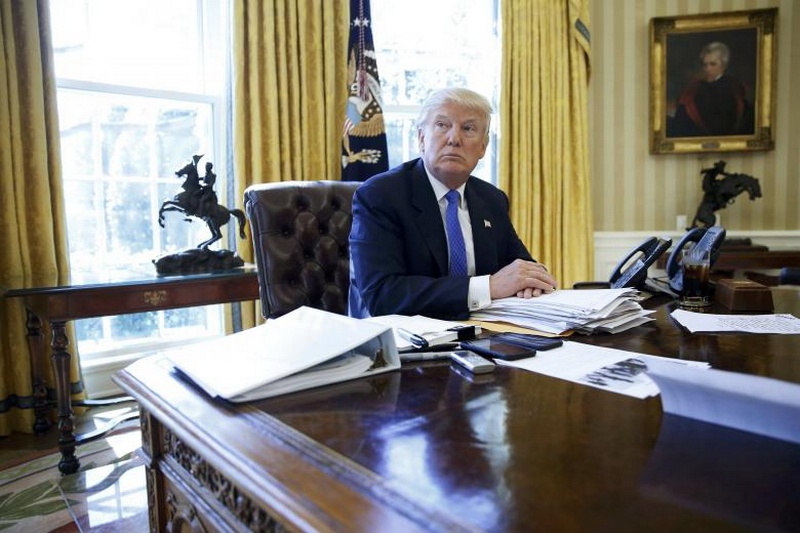 U.S. President Donald Trump said on Thursday he likes the concept of a two-state solution to the Israel-Palestinian conflict, expressing his preference on the issue for the first time since sparking international criticism for appearing to back away from the longstanding bedrock of Middle East policy.

But in an interview with Reuters, Trump stopped short of reasserting a U.S. commitment to eventual Palestinian statehood and instead said again that he would be “satisfied with whatever makes both parties happy”.

Trump’s comments put a new twist on a statement he made at a Feb. 15 joint news conference with Israeli Prime Minister Benjamin Netanyahu suggesting that his administration would no longer insist on the creation of an independent Palestinian state as part of any future peace accord.

It could also send a signal to both sides, as well as the international community, that the principle that has long underpinned U.S.-led peace diplomacy will not be discarded if the Trump administration moves forward, as he has promised, with an initiative to restart long-stalled peace efforts.

“No, I like the two-state solution”, Trump said when asked whether he had backed away from the concept during his joint White House appearance with the right-wing Israeli leader. “But I ultimately like what the both parties like”.

“People have been talking about it for so many years now. It so far hasn’t worked”, he added. But he then repeated his revised position, saying: “I like this two-state solution, but I am satisfied with whatever both parties agree with”.

«I’m looking at two states and one state, and I like the one both parties like», he said at last week’s news conference. «I can live with either one».

Those words were welcomed at the time by the Israeli right but denounced by Palestinians, who seek a state of their own.

A one-state solution would be deeply problematic for both sides. One concept would be two systems for two peoples, which many Palestinians would see as apartheid and endless occupation. A second version would mean equal rights for all, including for Palestinians in an annexed West Bank, but that would compromise Israel’s Jewish character.

United Nations Secretary-General Antonio Guterres cautioned against abandoning the idea of a two-state solution, saying there was «no alternative», and Egyptian and Jordanian leaders also renewed their commitment to that goal.

Trump’s revised language could soften such criticism, but still fails to meet demands that he explicitly re-commit to seeking a two-state solution.

At the news conference, Trump pledged to work toward a peace deal but said it would require compromise on both sides. He also surprised Netanyahu by urging him to “hold back on settlements for a little bit”, a vague appeal to curb construction of Jewish settlements in the occupied West Bank captured in the 1967 Arab-Israeli war.

But at the news conference he offered no new prescription for achieving an accord that has eluded so many of his predecessors, and Palestinian anger over his strongly pro-Israel stance could make it difficult to draw them back to the negotiating table.