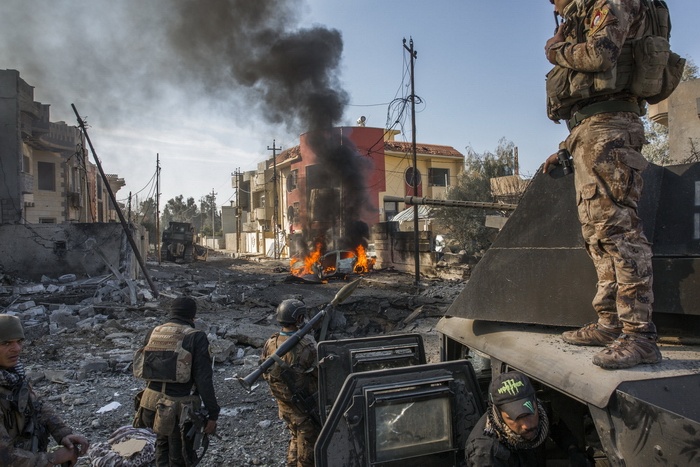 The battle to retake IS’ Iraqi stronghold will be protracted, and could signal the start of a new and different kind of war

The battle to eject the Islamic State (IS) organization from its last Iraqi redoubt in western Mosul — waged by the Iraqi army with support from the Kurdish Peshmerga, the Popular Mobilization forces and US and British Special Forces — has moved into a new phase. It is likely to be the fiercest yet, resembling the battle for Berlin in the Second World War.

US warplanes have bombarded these areas intensively in preparation for the ground offensive, amid fierce resistance from the defending forces.

This has been happening with remarkably little media coverage or expressions of concern for the civilian population.

In stark contrast to Aleppo and elsewhere in Syria, such concern would be construed as sympathy for terrorism and terrorists.

The western districts of Mosul differ from the eastern side of the city which Iraqi forces managed to regain with relative ease. They are more densely built-up and populated, with some 650,000 inhabitants.

IS fighters have prepared elaborate defenses for the decisive battle, digging networks of tunnels and setting up sniper posts with the aim of inflicting the maximum losses on the advancing forces.

Western Mosul is of major strategic importance because it is the main Iraqi gateway to al-Raqqa, IS’ capital in eastern Syria where its military command and political leadership are based.

Its leader and ‘caliph’ Abu Bakr al- Baghdadi is also believed to be there, in an underground bunker along with a number of key aides, mostly officers in the former Iraqi army and Republican Guard which were disbanded by the US military governor after the American occupation of Iraq.

The concentration of IS fighters in western Mosul in the city centre with its closely-packed buildings and narrow alleyways prevents the use of tanks and armored vehicles to take the city and limits the utility of air power – unless coalition forces are prepared to inflict civilian casualties on a massive scale. That would cause outrage among the Iraqi Sunni population and exacerbate sectarian tensions in the country in the wake of the battle. Most observers therefore expect the retaking of western Mosul to be a prolonged and bloody operation, fought street-by-street.

Most of the victims are bound to be civilians, as they are trapped between the two warring sides.

Iraqi forces and their allies have called on the inhabitants to surrender and raise white flags to ensure their safety, while IS forces have been shooting at anyone who tries to do so or attempt to escape. There have been reports of killings and a state of near-famine in the city, which is set to worsen in the weeks and months due to the lack of any food or humanitarian supplies.

The battle for Mosul will be protracted because the besieged IS fighters – especially the foreigners among them — have no option other than to fight to the death. All avenues for them to escape or surrender have been blocked.

Even if some do manage to escape, which by all accounts would be extremely difficult, they could only go to al-Raqqa, where a similar battle awaits them in due course — like the fighters who left Aleppo for Idlib.

Given the massive array of forces deployed against it, lS may eventually be defeated in Iraq. But it cannot easily be made to disappear from the global political and terrorist map.

It will go underground and resort to clandestine activity, fired up with an even bigger dose of animosity and desire for revenge, not only in Iraq but worldwide.

This is where the real danger lies.

The culmination of the battle or Mosul may signal the launch of a new war of terrorism and clandestine action.

In recent months IS has been decentralizing its structures and setting up branches in vulnerable parts of the Arab and Islamic worlds – including the Sinai desert, southern Libya, the African Sahel, southern Yemen, Afghanistan and elsewhere.

This calls for a new political strategy, focused not on denying IS its sources of income but the conditions in which it can thrive.