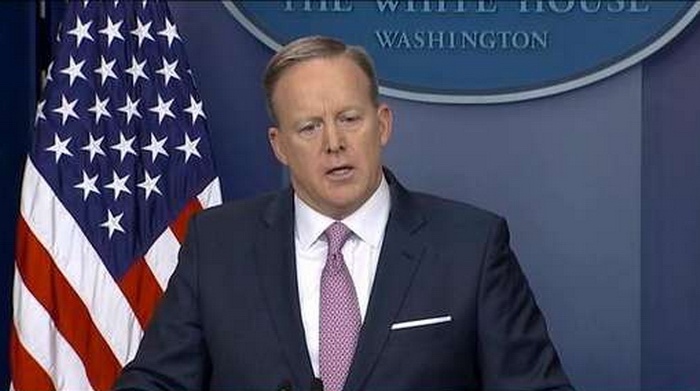 The White House source said that president Trump is trying to reach a «deal» with Russia in order to work together to fight terrorism and regarding economy.

According «Reuters», the White House confirmed that work with Moscow in this direction will continue.

The White House Press Secretary Sean Spicer told reporters: «that president Trump said clearly, if we were be able to make a deal with Russia, which some past administrations fail or didn’t bother to do, I’ll will do it, and if it cannot — will not do, but I’ll will try.

Noting that, his success as a businessman and as a negotiator must be seen as a positive sign, that he is capable of doing so».

Spicer said, «If we can find a common ground to defeat ISIS and fighting terrorism, and work to increase the growth of the economy — there where we can find areas of common economic interests — then we will do so, and we will continue to work with Russia on this regard».

The White House Press Secretary concluded «if this is in the interest of the United States, it will conclude a dea».

It is worth mentioning that the Russian Foreign Minister, Sergey Lavrov, announced on Thursday February 16 / 2017, during a meeting with his US counterpart, Rex Tillerson, that Russia and the United States, have many issues to be discussed, Lavrov emphasized that Russia does not interfere in the internal affairs of other countries, including the United States of America.

It should be noted that the Russian Foreign Minister, Sergey Lavrov met with his US counterpart, Rex Tillerson, for the first time in Bonn, on the eve of the ministerial meeting of the Group of Twenty nations.

The first telephone conversation between Russian President Vladimir Putin and US President Donald Trump, was Saturday, January 28, 2017, and the conversation turned through to the relations and the urgent issues on the international agenda, as the two leaders pledged to continue their personal contacts and agreed to give help to work on possible appointments, regarding their upcoming meetings between the two presidents and its venues.