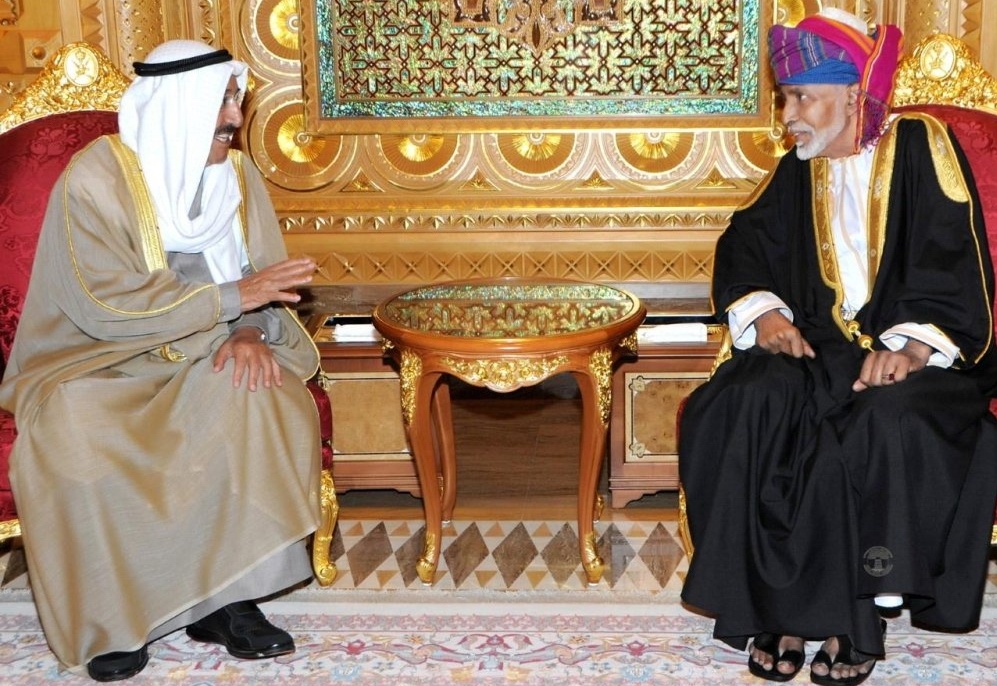 Kuwait and Oman want no part in Saudi Arabia’s wars in Yemen and Syria, nor its anti-Iran alliance with Trump and Israel

It is not clear whether Monday’s visit to Oman by the emir of Kuwait, Sheikh Sabah al-Ahmad al-Sabah, was aimed at mediating to mend strained relationships and resolve differences within the Gulf Cooperation Council (GCC), or at forging a stronger bilateral partnership between the two countries that are increasingly emerging as the six-member bloc’s ‘dissidents’.
Saudi Arabia’s King Salman pointedly avoided going to Oman during his recent high-profile tour of GCC states in what was seen as a clear signal of disapproval.

Turkish President Recep Tayyip Erdogan similarly excluded both Oman and Kuwait from the itinerary of his latest trip to the Gulf.

In contrast, Iranian President Hassan Rohani visited both countries last week, at a time when Saudi Arabia was escalating its war of words against his country to new heights.
Last month ,the Kuwaiti emir sent his foreign minister to Tehran on a mission – endorsed by the annual GCC summit held in Manama in December — to try to open new channels of dialogue between the Gulf states and Iran and reduce tensions between the two sides. This was a logical step, reflecting strategic awareness of developments in the region and serving the cause of these countries’ stability. But the Saudi authorities embarrassed the Kuwaitis by publicly washing their hands of this initiative and disowning it even as the Kuwaiti minister was discussing it with Iranian leaders.
Rohani’s fleeting visit to Muscat and Kuwait last week, coinciding with Erdogan’s trip to Saudi Arabia, Bahrain and Qatar, highlighted the existence of a rift within the GCC – though the state-controlled media, which habitually sweep differences between the Gulf states under the carpet, did their best to ignore it. But it also illustrated the strengthening relationship between the bloc’s two most independent-minded members. Both Oman and Kuwait have sought to distance themselves from the region’s wars and its confessional and sectarian polarization, as well as the ‘Sunni Alliance’ which US President Donald Trump seeks to form, bringing Saudi Arabia, the UAE, Egypt and Jordan together with Israel (in a security and intelligence role) to confront the supposed Iranian threat which is being exaggerated on an unprecedented scale these days.
There is no longer any prospect of a dialogue between Iran and the GCC, and specifically Saudi Arabia, taking off in light of Saudi Foreign Minister Adel al-Jubair’s fiery rhetoric at the Munich security conference and ongoing arrangements to establish the new alliance — whose first task seems se to be the establishment of a ‘safe zone’ in northern Syria. The Kuwaiti emir’s efforts would therefore seem to be doomed, even though Iran, which senses the gravity of the fresh Israeli-American assault it is facing, welcomes detente with its Gulf neighbors and the resolution – or at least the reduction – of its differences with them.
Jubair categorically rejected Iran’ calls for dialogue, branding the country the world’s foremost sponsor of terrorism and accusing it of seeking the destruction of Saudi Arabia.

He said that any cooperation with Tehran would be very difficult unless it changed its behavior, and exhorted the ‘international community’ to put an end to its support for the Houthis in Yemen and Bashar Al-Asad in Syria.
The Saudi leadership doubtless views the Kuwaiti-Omani rapprochement with serious concern. Both countries are wary of the new alliances it is forging with the US and Turkey and the wars it is waging in Yemen, Syria and Iraq, in which they have declined to take part.

Indeed, they have adopted a position of near-neutrality in these conflicts, and for the Saudis this is deemed to be not just unwelcome but unacceptable.
The Kuwaiti emir’s visit to Oman may be the harbinger of a fresh approach within the GCC to the region’s conflicts and wars which could develop in the weeks and months ahead.