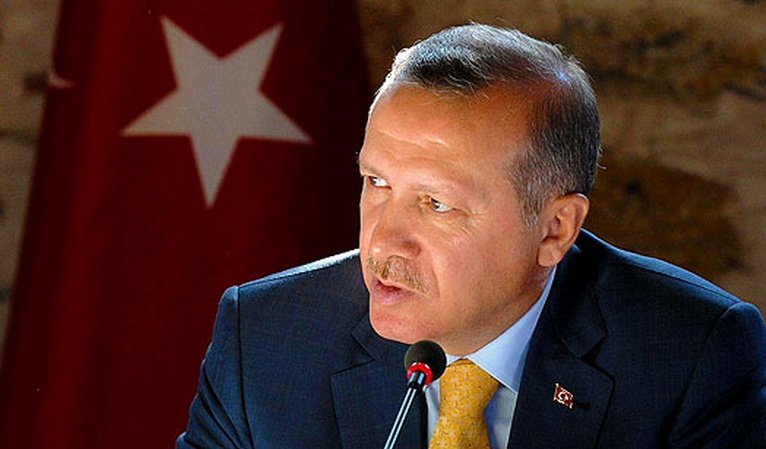 It seems that the Turkish president still would like to play on the policy ropes all together in one time.

Again he’s still on looking for US supporting him in addition to the pursuit of enhanced cooperation with some Arab Gulf states.

Perhaps Mr. Erdogan is not yet could accept the idea of all who stood against him, especially on a personal level in relation to the future of the conflict & the crisis in Syria, particularly, on the situation that began to show clearly that the cuff tend to the favor of the Syrian president & with the unfolding events which assumed that they will even be accessible the final version to resolve the crisis in Syria, with the survival of the Syrian regime, at least for a certain period, based on words by the lips of many Western officials.

Erdogan now faces a critical moment in Syria, where Ankara stands to confront Damascus & Washington in support of the Kurds who are fighting the so-called Islamic State, who are considered by the Turkish as terrorist, on the other hand, there is still a lot of confusion & lack of clarity regarding the level of cooperation between Turkey & Iran in addition to the need for Turkey to fully maintain coordinated with Russia, at the highest levels.

For the Turkish president to realize that things are for while now on the hands of Russia & without any ambiguity & betting too much on the US president Donald Trump administration which is useless, without keeping live cooperation with Putin, especially that Erdogan is supposedly knew for now after this long experience that there is no point in counting on the West with realize that keeping hopes high on the US, brought only damages to Turkey.

This became a clear fact that, in the event of continuing on the reliability of the West and the United States, Turkey, Erdogan will go straight to a closed road or in best conditions enter into an adventure with no guarantees & with consequences which most likely will lead Turkey to come out a loser as usual.
Erdogan will not rest without a reach for US/Russian agreement on Syria & without the approval of Iran & Syrian government.

Today, Turkey is teaming up with Russia in its war against Daesh, although Russia is also an ally of the Syrian government, with politicians recognize the need for coordination with the United States to achieve its ambitions in the region, especially in northern Syria.

Following the telephone conversation between US President Donald Trump & his Turkish counterpart Recep Tayyip Erdogan, Mike Pompeo the director of the Central Intelligence Agency visited Ankara to meet with the highest-level of Turkish officials, which focused on testing the willingness of Turkey to coordinate with the United States in Syria, & in the Middle East in general, as well as clarify America’s goals in the region over the next few years.

As Pompeo’s plane was landing in Turkey, Russian fighter jets bombed a site that was guarded by Turkish troops near the City of Al-Bab, northern Syria, killing three Turkish soldiers.

In fact, it is not clear whether there was a link between the two developments, but while the Kremlin confirmed that the Turkish troops evacuated the site before the raid, Turkish officials rejected that claim.

Sete Yilmaz who is a Turkish political analyst, specializes in foreign affairs & security policy said: «It’s impossible to have such incident by chance, especially with the absence of any apology from Moscow. It is a threat».
Also a Turkish expert Hussein Baji noted that, there is a possibility that it’s a deliberate incident.
Is it a Russian message to Ankara to abide by what has been reached with the Russian side & move forward with the consequent work after the Astana conference.

Everyone knows that the leaders of armed groups in Syria who attended the Astana meeting, had met in Istanbul before going to Kazakhstan, which is well known that Turkey’s significant role in the control of these groups.

This visits generally looks strange, as if Erdogan’s visit to half of the Arab Gulf states, show us how divided those countries regarding the general position & the outlook of things in the region’s, since its clear that the general policy of Kuwait, the United Arab Emirates & the Sultanate of Oman has always been considered more poise from both Qatar & Saudi Arabia with Bahrain policies that stand between the two neighbors Qatar & Saudi Arabia except the obvious attempt to send bad signal towards Iran.

All this in addition to Erdogan’s increasingly bizarre statements in the timing & flowing attitude change by him or his officials resent bold statements Against Iran, apparently to satisfy Saudi Arabia & the United States like offers obeisance again in order to return within the Western Squadron, especially after the start of the crystallization vision of US President Trump about activation a Sunni moderate Arab to confront Iran.

But the only problem is that there is a strong adherence surrounded Erdogan problems, especially with the growing pressure on him to accept a Kurdish entity on the southern borders.

Moscow’s position was clear on this issue within the draft constitution presented by the Syrian official delegation of the Syrian opposition, a few weeks ago.

This constitution draft provides a «cultural autonomy» for the Kurds, no more.

With those words came as a result of Damascus rejected the idea of establishing autonomous regions in Syria, it has not provided a promise of independence for the Kurds, who has pledged to them by the Americans.

According to Turkish believe, as it came from some Turkish officials saying, that the idea of Trump administration is to establish a no-fly zones area is just a camouflaged plan to build an autonomous Kurdish region on the ground, with a view to announce its birth later.

Add to this that, the Turks are also worried about the possibility of US with Russia in Syria.

In that case, the two forces will decide, without a doubt, the fate of the Kurds in the absence of Ankara.

If true, things will come out of the hand of Erdogan.

But it is likely to be that Pompeo search in Ankara, is how to implement what Trump had promised during his campaign, perhaps push Ankara to work with the Kurds to establish a healthy relationship between them.

But the question posed by Ankara is: «with any class of the Kurds will cooperate?».

It works smoothly today with the government of Iraqi Kurdistan, but refuses to work with the Kurdistan Workers Party, PKK, who those are considered by Ankara as enemies & terrorist, which is exactly they words that the Turkish officials told the head of the CIA in this regard.

But the director of the CIA has not visited Ankara in order to assess the limits of cooperation of Turkey with the Kurds, but in order to continue the war against Daesh.

Washington wants Ankara to explore ready to cooperate with the US plan for the eradication of the terrorist organization, & to calm the crisis in the Middle East.

And so natural, that Erdogan shows his cooperation will with America in a way that serves the interests of his own country.

He declared, days after Pompeo left Ankara, that the Turkish forces are near the end of the battle for Al-Bab city, with the next target, is to liberate the City of Raqqa from the grip of Daesh.

But the road to that objactive is not as easy for Turkish troops, because the large part of the buffer zone between Al-Bab & Raqqa is under the control of pro-Kurdish forces such as Syrian Democratic Army & the PKK, also there are the forces of the Syrian government, and it is impossible for Turkish troops to start any military action in that area without coordination with Russia and with the Syrian regime even one way or another, taking into consideration that the United States will not unilaterally go for any military action in the region without the presence of cooperation & coordination between them & Russia, which is one of the major topics to start searching for its details after the meeting between the foreign ministers of the United States & Russia recently.

In conclusion it remains to say that Turkey’s President Erdogan today on the verge of very difficult period which is particularly risky & Erdogan currently on the outskirts of entry stage of the adoption & the implementation of the constitutional amendments in Turkey with the specter of terrorism that hangs over the country with the increasing security incidents there & the big fears on the Country economical situation.

So he must think seriously with not doing any risky steps that will bring him & his country a disasters, because the key to solve the region’s problems is, however, is in Russia’s hand for long & it’s not on the hand of the United States & some of the Arab Gulf states & will never will be, a country such as Saudi Arabia who entered a very difficult economical phase that will lead to a catastrophic consequences.

A fact & therefore President Erdogan should not held hopes on them & learn from past mistakes, because you cooperate with them & you will receive losses, embarrassing circumstances & terrorism with bold that going to fully turn the Turkish flag to one & only color which we don’t hope for.