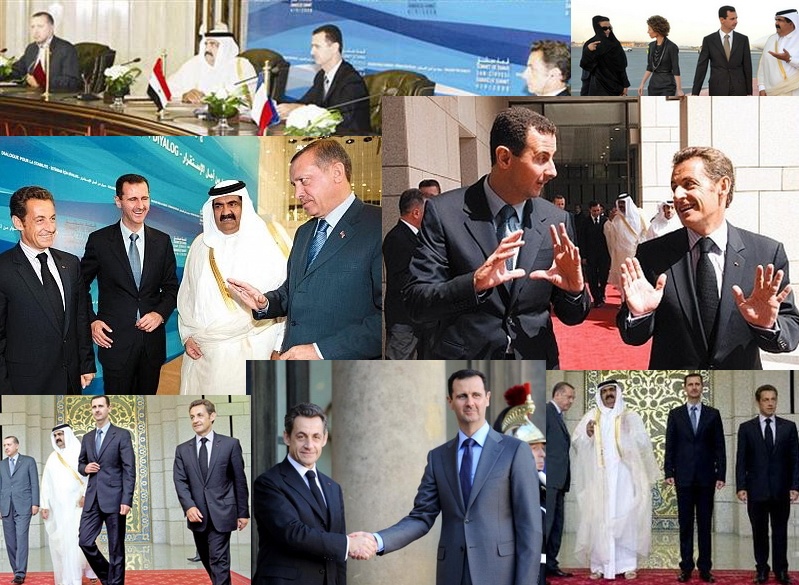 At the revolution that took place in Ukraine in the late nineties against the pro-Russian government of victor Yanukovich & with all its complications that also led to the other so-called orange revolution in 2004.

At that time the issue of the Russian Gas supply to Ukraine & through Europe played the major part in its events.

The new President Victor Yushchenko with his prime minister Yulia Tymoshenko, didn’t succeed to last long in power under the heavy weight of its inside corruption.

The new government in Ukraine was simply unable to do anything & fall miserably in front of the first two things that is crucial, one, the subject of gas supply from Russia, two, counting on NATO & the West in order to support their country in all aspects, & when winter comes, there is no Gas from Russia!

Soon the comrades of the Revolution turned on each other & the old government came back to power again.
The other example, is after the foolish game that Saudi Arabia play a big role in which to put pressure on Russia to change its position regarding the Syrian crisis by reducing oil prices to record levels to put pressure on Russia economically & which undoubtedly, significantly impact all the Russian oil companies with the exception of Gazprom, which was not affected greatly from this game, but in return it hit Gulf Arab states, particularly Saudi Arabia big & led to never been before economical crisis which will affect them for long with doubts of them being out of it.

Alone all nations of the West cannot count on America in anything in this matter for the simple reason which is geography, since what can the United States do to help Europe… supplying Europe, for example with Gas!!!

The problem always as I’ve mentioned is geographical, America is of course cannot do anything about it.

Geography & Nature are the only factors which the American arrogance cannot change or confront it in any way, & by implication, I can assure, that the enemy of the only global force in the world, the United States, which will this force cannot defeat is nature.

Earthquakes, volcanoes & tornados are the lethal weapons of nature that stand against the arrogant American power, the power of the US of A stands miserable, powerless to face it.

We’ve seen that many times, it hits you inside your country & kill your people,
And you cannot do anything about it, nobody can, moreover the next by experts will be more destructive.
Returning to our story (sometime I get away from the main topic, but everyone can notice that things are related to each other).

There was an additional extension in fact, it was the other step is a process to contain Iran to incorporate in this game by giving the Iranian gas pipeline (The Islamic pipeline to join the Arabic pipeline) through Iraq to Syria, with Jordan, Egypt & to the Mediterranean to give Iran a fair share to completely eliminate the monopoly of the Russian gas supply with driving a wedge in the relations between Iran & Russia, & has thus isolating Russia from Iran & Syria on the one hand was tightening the Western blockade of Russia, which reached its peak in the expansion of the scope of the missile shield process as well as equipped to hit Russia from inside by multiple plans that was prepared, based on the upcoming economical crisis that will hit Russia & other scenarios regarding dismantling the Russian federation & bring some ethnics & nationalists conflicts which is just waiting for the zero hour to be launched with Turkey & the gulf financial support taking part of it, certainly there is no time now to research & talk about these plans.

In addition to break the Iranian problem with the West (Money & financial temptation with an opportunity for Iranian /Western partnership can break the last ice that may play a significant role in bringing Iran to the West) & that could explain the entry of France to this plan & the line of this regional- international project.

France, represented by its president at the time, Nicolas Sarkozy, the plan which was started to be the main topic at the first four-way summit 2008, opened fully during the four-way summit held in Damascus 2010, which gathered Assad with the triple Erdogan/Hamad/Sarkozy, with France in the plan, which was the most European country logically exist within the plan Because of its old relationship with the Middle East, particularly Syria, as former French colony with Lebanon. in addition, France is the most capable of rapprochement with Iran for a lot of reasons, most importantly, I believe, the European country that Ayatollah Khomeini was resided in exile & prepared & ran the Islamic revolution which succeeded in Iran to over throne the rule of Shah Mohammad Reza Pahlavi, this European country was in fact country France.

Also Sarkozy, maybe of his Jewish heritage, he has interests to get success of an international plan in the region would make France the state that will be a party ((mediator)) & successful achieve peace in the time of the move during this period towards the revival of negotiations between Syria & Israel for peace under the Turkish and French probably take care of that were going on in full swing, & it was expected to be a result of which yielded a peace deal in which the Golan Heights will be back to the Syrian sovereignty with the arrival of the gas pipeline from Qatar to Syria, with provide Israel with gas from possibly Syria, therefore naturally & logically some parts of the Golan will remains under Israeli control for logistical reasons purely related to the gas project so that it is possible to agree on a formula to accomplish this process & thus the danger on Israel will ends & simply that will end the Arab-Israeli conflict & end the objective & the purpose of the existence of Hezbollah, & there is no reason for Iran’s hostility with Israel & with giving Iran’s gas pipeline the part in this great game that will change the Middle East altogether.

In the case of annexation Iran from the plan, it has enough part by the Turkish Qatari French trio after the containment of Syria & isolate it from Iran & thus will become both Iran & Syria & Russia separately in several ways either hostility or chill in relations or political dimension.

With always the availability for possible Israeli military action that might play a role as lunching attacks on Iran’s nuclear facilities, or even attack Syria at some point if the plans entirely fails.

Every plan has a B or even C plan in case of the failure of the original A one.

In our case here & the Israel’s Foreign Minister at that time Avigdor Lieberman, gave us a hint of what will happened when he threats Syria in 2010 that We’ll bring Syria back to Stone Age!

And that what will take place shortly.