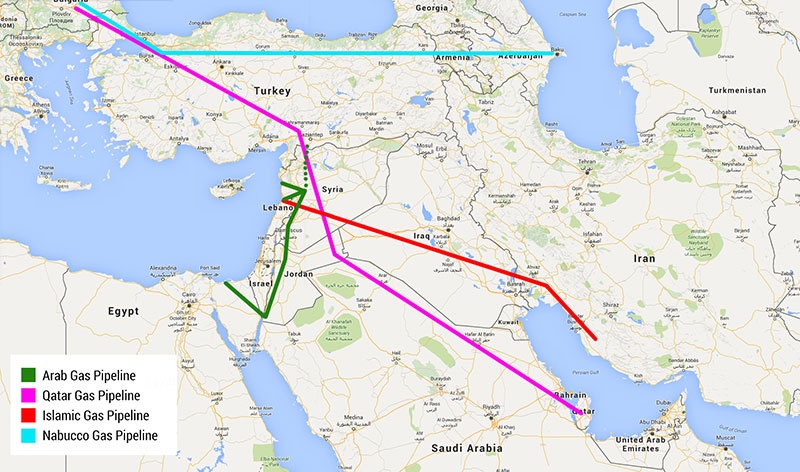 The Big plan, which was behind the rapid rapprochement between Turkey represented by the Prime Minister at that time, Recep Tayyip Erdogan, the Emir of Qatar at that time also Hamad bin Khalifa al-Thani, on the one hand & Syrian President Bashar al-Assad.

It was an integrated political-economical plan aimed to finally bring Syria to the West wing of the world & try to either cross it away from Iran & the Anti-Israel movements in the region such as Hezbollah & the Palestinian movements as well as to bring deep rift in the historical relationship between Syria & Russia taking it to the path of no return & penetrate the Syrian regime from inside through changes in the methodology & the foreign policies of Syria in general & changes that will happened sooner or later in the domestic level through the introduction of the Muslim Brotherhood movement to the political system, taking advantage of the implicit pumping money inside Syria through large investments & dumping the Syrian market with Turkish goods to hit the state-sufficiency that experienced by Syria for long time ago, or at least bring wave of economic vibrations, that the Syrian government cannot be addressed in any ways after the success of this penetration plan.

The financial funds from Qatar & even Saudi Arabia that purchase whatever it can purchase or at least create a certain internal conditions that will make a large segment of the Syrian people, Sunni & again the majority Sunni in a particular economic situation with a backup solution which is fueling the sectarian conflict between Sunnis & Alawites, who are controlling Syria, if we want to recognize this fact or not.

This is the reality & frankly on the ground, this issue in Syria is somewhat similar to the case of racial discrimination against blacks in the United States, that media & marketing work to serve the appearance & reputation of the United States with its Democracy, (mark under the word of democracy), you’ll find that such racism is rejected & unacceptable, & the US law does not allow it.
But the situation as it is implicit discrimination exists on the ground & in the mindset & methods of many white Americans thinking & ideologies which most of them today supporting President Trump’s policies.

This is the reality of the situation in Syria, in the government media is also ostensibly as Syria a multi religious & ethnic backgrounds live together in peace in Syria & tolerant country with no sectarian discrimination, but on the ground it is not that bright image.

We saw in this six years, this image shattered big time, we saw those multi religious & ethnic backgrounds Syrian people how they treat each other.

This subject is very complicated & has its stories & elements, so I’ll not delve on the subject, because it needs a lot of explanation & scrutiny because it’s linked to Syria’s history & a series of mistakes & previous accumulations that created this situation & enshrined as a fact that cannot be ignored, even though some who’ve tried to suggest or try to show it in any way that it’s not real.

The plan, unequivocally is a project to extend a natural gas pipeline from Qatar to access Syria through Saudi Arabia, Jordan, then through Turkey to Bulgaria to reach Europe, joined by the other gas pipeline of Nabucco line from Azerbaijan.

This would’ve been end Russia’s monopoly of gas supply to Europe countries & will exposed Russia’s Gazprom to major shock, Gazprom, Russia’s sovereign company which will face a large earthquake that will affect them & will be the killing shot on the Russian economy.

Gazprom is one of the most important achievements of Russian President Vladimir Putin, Russia’s sovereign company, which secure an income that flows into the federal sovereign treasury proportion as the crucial sources of income for Russia.

Sure is that, the story of how President Putin controlled & reformed this company was a masterpiece story of work that he did in order to bring it back among many other companies of multiple working activities back to the government.

Putin’s reforms that he did upon his arrival to power in the late nineties & the new millennium brought back many companies in various sectors, energy companies in particular to Mother Russia, with the energy companies like Gazprom Russia’s economy secured the source of income which was important to support the federal budget & it will contribute in the upcoming years of the rule of Putin to reform Russia in order to allow Russia to advance again & return to its international weight in terms of economic, political & even military wise.

It was a matter of supplying Europe with the Russian gas that is an important political & economical issue.

The NATO/Western Europe pressure on Russia cannot be ignored, & When this pressure access to the peak, only at that critical level of intense & the disagreement controlled Russia with NATO/ Western Europe, the issue of Russian gas supply to Europe raises to extinguish the European boil on Russia.