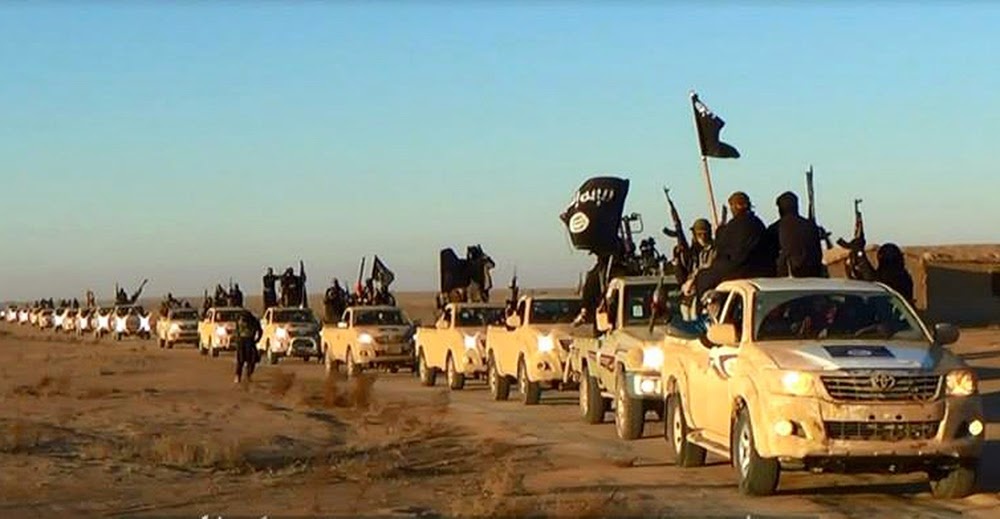 One of Islamic State (IS)’s propaganda outlets released a videotape last week which featured strongly-worded calls for the killing of a number of well-known Muslim religious figures.

It conveyed the unmistakable impression that the group is undergoing a policy transition, from a period “consolidation” to one of going on the offensive, and from territorial expansion to ideological and propaganda outreach.
Although YouTube administrators took down the video within 24 hours of it being posted, it spread like wildfire and was very widely viewed by the organization’s supporters and sympathizers, especially young people.
A number observations can be noted and conclusions drawn from close scrutiny of the 25-minute production, which was of high technical quality and featured a number of IS’ spokesmen, notably Abu-Umar al-Lubnani.
It was devoted above all to denouncing and inciting the murder of senior Saudi religious scholars, including the kingdom’s mufti Sheikh Abdelaziz Al ash-Sheikh and its most high-profile (both on television and Twitter) preachers Muhammad al-Araifi, Salman al-Odeh, Ayedh al-Qarni and Abdelziz al-Fawzan.

Quotes were carefully selected from their speeches and writings which showed them contradicting themselves and/or praising the Saudi authorities, along with clips of their meetings with King Salman and other top royals, to condemn them as hypocrites and sycophants.
Considerably less time was devoted to non-Saudi clerics such as the Qatar-based Sheikh Yousef al-Qaradawi, the Sheikh of al-Azhar Ahmad al-Tayyeb, the former Mufti of Egypt Ali Gumaa, Iraq’s Ahmad al-Kobeisi, and the mufti of Syria Ahmad Hassoun. (Qardawi only featured for a few secons in still photo of him with the emir of Qatar).
In both cases, however, the tone of incitement in the video – titled Umala La Ulama – ‘Agents Not Scholars’ – was hard-hitting and unprecedented. Its charges against the targeted preachers were supported by documenting their spoken or published declarations (and in some cases, lies) in which they either denounced IS or supported the rule of ‘tyrants’.

Their own words were cited to deride and mock them, and their fatwas were blamed for the war being waged against IS.
The video directly called on cells of IS supporters or so-called ‘lone wolves’ to kill and shed the blood of the clerics concerned, declaring that this would bring ‘much good and great benefit’.

This is the first time in which such a clear an unequivocal fatwa has been issued by IS for the murder of such figures.
Notably, despite IS’ dispute with al-Qaida, the video lauded al-Qaida’s founder Osama bin-Laden and the former head of its Iraqi branch Abu-Musaab al-Zarqawi. It cast them as true mujahideen, contrasting them and their life-styles with the targeted preachers – whom it portrayed (with supporting photographic evidence) as living in the lap of luxury.
It is also noteworthy that the video did not directly refer to the war in Yemen or the Houthi movement. Nor did it mention IS’ Islamist rivals in Syria, Ahrar ash-Sham or the Fateh ash-Sham Front, or their clerics and leaders (though it did briefly show an image of the Saudi-based Syrian preacher Adnan al-Arour).
This video is of major significance. It is a call for terrorist attacks that is aimed not just at intimidating some of the region’s best-known clerics but also at stoking divisions and undermining the domestic front in a number of countries, especially Saudi Arabia.
Islamic State is losing territory in Iraq and Syria, as well as large numbers of fighters, while waging an existential war in defence of its Iraqi capital Mosul and preparing for an imminent assault on its Syrian stronghold al-Raqqa.

It is therefore in the process of moving underground and reverting to the tactics of the original al-Qaida: terrorist attacks against its enemies, be they states or individuals.
The high production quality of the video, and its ample use of documentation and archive material, makes clear that IS’ media and propaganda capability remains formidable.

The film is likely to have been made with the assistance of collaborators in other countries, particularly Saudi Arabia, to provide information, documents and video clips. The presence of IS sympathizers was highlighted by the two operations mounted by Saudi security forces last Friday in Jeddah, employing helicopters and large numbers of troops, against what were reported to be armed terrorist elements. A similar action was reported by al-Riyadhnewspaper to have taken place in Medina.
I have repeatedly made the point in this column this if IS were to go underground, and be relieved of the burdens of administering cities and controlling civilian populations, it would become even more dangerous. Its appeal beyond the borders of its ‘caliphate’ can only be enhanced by the anti-Muslim measures, rhetoric and bluster of US President Donald Trump and his administration – described by some as a new Crusade – and the fulsome support voiced by Gulf governments for him and his policies. This plays into the hands of IS and its message of terrorist incitement, and facilitates its efforts to attract young recruits to compensate for its war losses in Iraq and Syria.