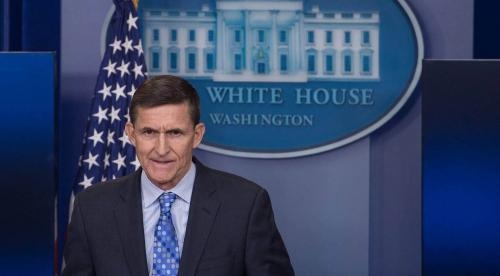 President Donald Trump’s national security adviser, Michael Flynn, is struggling to get past a controversy over his contacts with Russian officials before Trump took office, conversations that officials said have raised concerns within the White House.

Top White House officials have been reviewing over the weekend Flynn’s contacts with the Russians and whether he discussed the possibility of lifting U.S. sanctions on Russia once Trump took office, which could potentially be in violation of a law banning private citizens from engaging in foreign policy.

Flynn is a retired U.S. army general and former director of the Defense Intelligence Agency. An early supporter of Trump, he has been a leading advocate to improve U.S. relations with Russia.

Flynn had initially denied discussing sanctions with the Russians in the weeks before Trump took office Jan. 20 and Vice President Mike Pence went before the television cameras to repeat the denial and defend Flynn.

When a Washington Post report emerged last week quoting officials saying the subject of sanctions had in fact come up, Flynn left open the possibility that he had discussed sanctions but could not remember with 100 percent certainty, an administration official said.

A second administration official, also speaking on condition of anonymity, stressed that Pence made his comments based on a conversation with Flynn. Pence is said to be troubled by the possibility of being misled.

Flynn has apologized to Pence and others over the incident, the first official said.

A third official said the uproar prompted White House chief of staff Reince Priebus to review the matter with other top officials as Trump played host to Japanese Prime Minister Shinzo Abe over the weekend in Florida.

The White House did not respond to a request for comment.

There was no indication from transcripts of Flynn’s conversations that he had promised to lift the sanctions but rather he made more general comments about hoping for better U.S.-Russian relations with Trump, the third official said.

Trump has yet to weigh in on the subject, promising to reporters on Friday that he would look into it.

Reporters are expected to ask him about Flynn at a press conference with Canadian Prime Minister Justin Trudeau on Monday.

There was a sense among some officials that while Flynn was on thin ice, he did not appear to be in imminent danger of losing his position, the third official said.

Even so, there were no loud voices speaking up for him. Trump senior policy adviser Stephen Miller was asked on NBC’s «Meet the Press» on Sunday whether Trump had confidence in Flynn.

“It’s not for me to tell you what’s in the president’s mind”, Miller said.