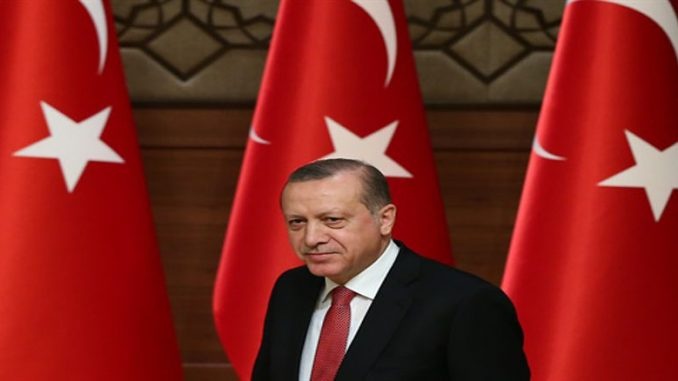 Erdogan looking for «lifeline» at the Gulf to save its economy from collapse… and acquisitions Egypt’s seat in the «Sunni alliance» that Trump wants to revive it against Iran… Will check his current tour of Gulf wandering? Why excluded the United Arab Emirates, Kuwait and the Sultanate of Oman?

Turkish President Recep Tayyip Erdogan began on Sunday a Gulf tour that includes Bahrain, Saudi Arabia, Qatar, aimed at achieving several political and economic targets in an attempt to save Turkey’s economy, which is facing unprecedented crisis putting it on the brink of collapse and to break the European blockade.

The political timing of this round trip was remarkable, as was also pointing to exclude three other Gulf states, Kuwait, UAE, Oman.

President Erdogan, announced at a press conference at Ataturk airport in Ankara before leaving, is that, the Turkish forces are on the verge of controlling the Syrian City of Al-Bab, and the relations between Turkey and the new US administration of President Donald Trump is in improvement within the coming months on the base of the two sides agree on the establishment of safe zones in Syria.

President Erdogan, who owns a highly sensitive aforesaid for the vagaries of the political situation in the region, and the assembling a new alliances in accordance with the orientations of winds, is well aware that President Trump wants to revive the focus of the «moderate» Arab, and the formation of a Sunni coalition to face the Shiite Iran, and for this he quickly strain backpacker to the Gulf states, which this will be the focus of the alliance.

In other words, President Erdogan wants to present himself as a «tent-pole» in this alliance, and to make himself and his country as an alternative to Egypt, which has become more tendencies to Russian-Iranian alliance of Syria, and is characterized by its relations with most Gulf states especially Saudi Arabia and Qatar as in severe nervous for reasons not here to be explained anywhere.

This offer which President Erdogan is coming with will find an open ears among his hosts in the Gulf, the Saudis in particular, who are waging a war against Iran, acting in three fronts Syria, Yemen and Iraq, but display is not free and cannot be free of charge.

Reports about Turkish economy in several specialized newspapers such as the «Financial Times», as well as the International Monetary Fund estimates that «the spring of the Turkish economy is over,» and the country is on a verge of an economical and financial disaster all together, with the Turkish Lira Currency at the brink of collapse with a loss of about two-thirds of its value in the past twenty months, and it reached unprecedented levels since the justice and development party came to power in 2002, and became one dollar equals four Turkish Liras, with obvious failures of all Turkish central bank interventions to pump $ 1.5 billion of in hard currency a couple of days ago in an attempt to contain the collapse, which it didn’t achieved its goals.

The International Monetary Fund said in a report issued at the beginning of this year, «The growing uncertainty surrounding the Turkish political scene, and the decline of tourism (about 35 percent) with high corporate debt levels, all of which negatively affect the country’s economy, where it is expected that the growth rate drops to 2.99 percent this year (2017), after hitting 10 percent in 2009. The country’s political chaos since the military coup last summer, „and increased after the arrests, which included one hundred thousand people, including deputies and confiscated a lot of expressive freedoms.
The tourism sector, which was generating on the state treasury about $ 36 billion a year, is suffering the most because of the terrorist operations that targeted the two capitals: political Ankara, historical, economical Istanbul, this sector accounts for 8 percent of employment in the country, in addition to this, that Turkey and because of terrorism, is no longer the preferred destination for foreign investment.

President Erdogan does not believe in solutions at hand, most notably raising interest rates to save the Turkish currency, because he is convinced that taking such a step would lead to lower growth rates, but these rates fall whether to raise interest or not.

The proposed solutions by President Erdogan says to the Turkish people to sale their gold, foreign currencies and buy the Turkish lira, and he’s firmly believes that there is an international conspiracy against Turkey, led by the West, and the most prominent weapons devaluation of the Turkish lira, and considered that both retains the dollar or the euro, “traitor», came out the theory that says” that there is no difference between a terrorist who holds a rifle in his hand, and the other terrorist, who puts the dollar or the euro in his hand, too, because both are targeting forcing Turkey to go away from its right directions and goals.

With many expectations of an imminent economical collapse, President Erdogan now is relaying on the Gulf states for help, and the help they want is to open up their markets for Turkish goods first, pumping tens of billions of dollars as investments in Turkey, but how these goods will reach out after we closed all the Syrian and Iraqi borders, and in order to prevent its arrival to the Gulf markets by land, and his policies of intervene in Syria played a major role in this regard.

Most Gulf countries are facing huge fiscal deficits these days due to declining financial reserves, as a result of lower oil prices, and are imposing austerity measures on their people, and borrows from the global financial and banking markets, Saudi Arabia is fighting a war of attrition, financial and mortal in Yemen, Qatar burdened with additional financial stretched due to infrastructure costs of the world Cup infrastructure installations, estimated at half a billion dollars a week (the final cost could reach $ 150 billion), along with the burden of financing political allies in Libya and Egypt (The Muslim Brotherhood), and above all the deficits in the general budget, either Bahrain’s financial situation is not needed to explain.

We do not know why President Erdogan did not go to Abu Dhabi in this gulf tour, where the Turkish/UAE relations have improved in the recent period, after the visit of the UAE foreign minister Sheikh Abdullah bin Zayed to Ankara, which been said on that visit, that it was fruitful results in removing the most important obstacle was the strained relations between the two sides, It’s in the presence of Emiratis oppositions in Istanbul (believed to be from the Muslim Brotherhood movement), which Erdogan’s government agreed to keep them away from Turkey and deported them to an unknown destination (believed to be either Britain or Qatar), according to media reports circulating in the recent period, and It was in secrecy.

President Erdogan lost Iraq and Iran economically, just as his country’s relations with the European Union has tensed as a result of the Syrian refugees crisis, will the Gulf countries become the alternate compensation?

What we’ve is to wait, because his trip is at its beginning, and we had a lot of doubts, if it was difficult for us to predict the positions of President Erdogan’s which is rapidly changing, and the steadfastness of its alliances Thus, we see that the three countries that he’s going to visit, do not have the «lifeline» of economic and perhaps political that he’s looking for, but just some «cautionary» promises… and only God knows.