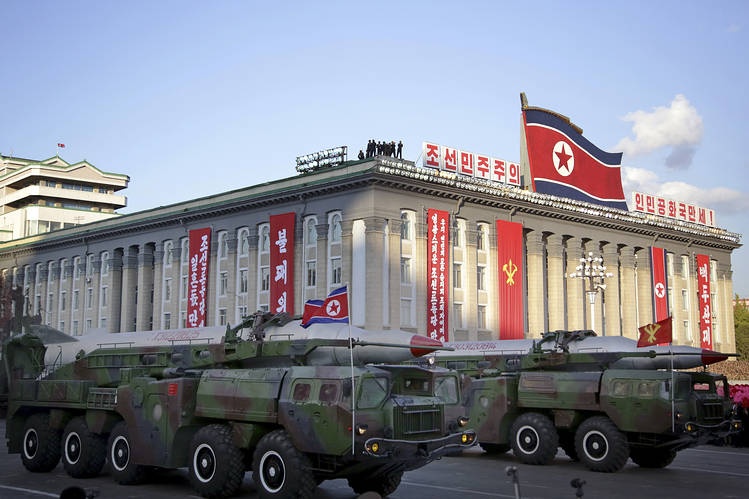 North Korea fired a ballistic missile into the sea early on Sunday, the first such test since U.S. President Donald Trump was elected, and his administration indicated that Washington would have a calibrated response to avoid escalating tensions.

The test was of a medium- or intermediate-range missile that landed in the Sea of Japan, according to the U.S. defense department, not an Intercontinental Ballistic Missile (ICBM), which the North has said it could test at any time.

The launch marks the first test of Trump’s vow to get tough on an isolated North Korean regime that last year tested nuclear devices and ballistic missiles at an unprecedented rate in violation of United Nations resolutions.

A U.S. official said the Trump administration had been expecting a North Korean «provocation» soon after taking office and will consider a full range of options in response, but these would be calibrated to show U.S. resolve while avoiding escalation.

The new administration is also likely to step up pressure on China to rein in North Korea, reflecting Trump’s previously stated view that Beijing has not done enough on this front, the official said, speaking on condition of anonymity.

«This was no surprise,» the official said. «The North Korean leader likes to draw attention at times like this».

«I just want everybody to understand, and fully know, that the United States of America is behind Japan, our great ally, 100 percent,» Trump told reporters in Palm Beach, Florida, speaking alongside Abe. He made no further comments.

China is North Korea’s main ally but has been frustrated by Pyongyang’s repeated provocations, although it bristles at pressure from Washington and Seoul to curb the North and its young leader, Kim Jong Un.

China’s foreign ministry did not immediately respond to a request for comment.

Trump and his aides are likely to weigh a series of possible responses, including new U.S. sanctions to tighten financial controls, an increase in naval and air assets in and around the Korean peninsula and accelerated installation of new missile defense systems in South Korea, the administration official said.

But the official said that given that the missile was believed not to have been an ICBM and that Pyongyang had not carried out a new nuclear explosion, any response will seek to avoid ratcheting up tensions.

Trump has pledged a more assertive approach to North Korea but given no clear sign of how his policy would differ from Obama’s so-called strategic patience. In January, Trump tweeted «It won’t happen»
after Kim said the North was close to testing an ICBM, but his aides never explained how he would do so.

The missile was launched from an area called Panghyon in North Korea’s western region just before 8 a.m.(2300 GMT Saturday) and flew about 500 km (300 miles), the South’s Office of the Joint Chiefs of Staff said.

«Our assessment is that it is part of a show of force in response to the new U.S. administration’s hardline position against the North,» the office said in a statement.

A South Korean military source said the missile reached an altitude of about 550 km and was probably a medium-range Rodong, which the North has successfully test-fired numerous times in recent years, or a previously unknown new type, given the unusually high trajectory.

The North tried to launch an intermediate-range Musudan missile eight times last year but most attempts failed. One launch that sent a missile 400 km (250 miles), more than half the distance to Japan, was considered a success by officials and experts in the South and the United States.

Kim said in his New Year speech that the country was close to test-launching an ICBM and state media have said such a launch could come at any time.

The comments prompted a vow of an «overwhelming» response from U.S. Defense Secretary James Mattis when he traveled to South Korea earlier this month.

North Korea conducted two nuclear tests and numerous missile-related tests last year and was seen by experts and officials to be making progress in its weapons capabilities, although until Sunday no ballistic missile launch attempt had been detected since October.

Its repeated missile launches prompted Washington and Seoul to agree to deploy a Terminal High Altitude Area Defense (THAAD) anti-missile battery in South Korea later this year, which is strongly opposed by Beijing, which worries the system’s powerful radar undermines its own security.

Sunday’s launch comes at an awkward time for South Korea, where President Park Geun-hye has been stripped of her powers after a December parliamentary vote to impeach her. Her fate will be decided by the Constitutional Court, which is hearing arguments on whether to uphold or overturn the impeachment.