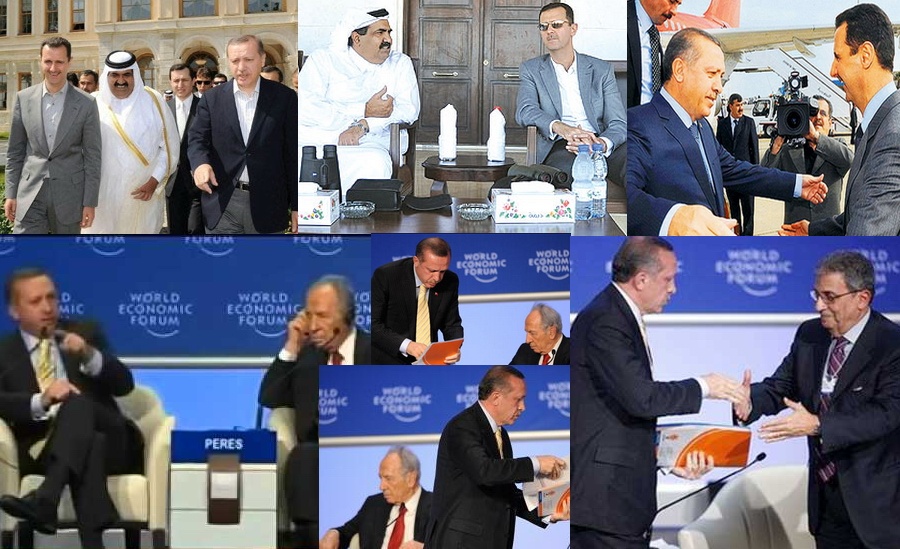 Returning to Syria after the end of 2006 July war in Lebanon, with the relationship between Syria with Qatar & Turkey reaches almost its peak & it starts to evolve rapidly in a very strange way in terms of dimension & friendly informality.

The images of the three leaders in very friendly and brotherly far from the usual formalities & protocol. You’ll see the Emir of Qatar Hamad bin Khalifa Al Thani & Recep Tayyip Erdogan with Bashar Al Assad together all the time and everywhere so it’s axiomatic to say that they never are separated.

One of the guards those who guards the lounge of the Syrian president in Mount Qassioun in Damascus, saying that, ″seeing Erdogan with his family or alone in the lounge has become very normal, you’ll not see a week passes without seeing Erdogan in the lounge with President Assad ″, also it become usual to see the Syrian president visit Erdogan in Turkey with same thing with the Emir of Qatar, even traveling together in one plane.

This friendly & fraternal relation got very close & starts to become weird & bizarre to the more optimistic or naivety people, so how come with the skeptic people!

During that period, Erdogan asked Assad & requested from him to do some works & come with initiative to change in some domestic politics in Syria regarding the Muslim Brotherhood issue and the need for an amnesty for prisoners belonging to this group in the Syrian prisons and work to ease the stranglehold on the group, allowing them to enter the political work in the country, which is the same thing that the Emir of Qatar encouraged Assad to go for it.

is well known that Syrian law criminalizing the members of the Muslim Brotherhood & joining this group with severe sentenced reached death or in less scenarios imprisoned for long periods with torture at the infamous.

The Syrian president did actually to some point respond to his Turkish & Qatari friends requests & suspended this law for some time and issue multiple amnesties decrees to release prisoners.

During several year at that period Assad issued several amnesty decrees releasing detainees from prisons with every time he issue an amnesty decree, Erdogan calls him & asks Assad Specifically about the number of Muslim Brotherhood members those who get beneficiaries of the amnesty decree.

Also in the economic field the Syrian market flooded with Turkish goods & the trading cargo trucks that basses Syria from Turkey to Lebanon, Jordan & gulf countries has increased a lot more than before.

Syrian government exchanged visits between them and the Turkish government with signing large number of joint agreements in various fields with free trade agreements, also lifting restrictions on the entry of Syrians & Turks to the two countries with establishing large Turkish commercial facilities Syria.

The balance of exchange trade has increasing with the amount of what Syria is exporting is just a one third of what Syria imports from Turkey, taking into account the big difference of the technical abilities & the productivity levels between Syria & Turkey, this difference which gave Turkey the upper hand to strength it’s position in Syria.

In 2004 Turkey & Syria signed a free trade agreement which came active in 2007, with increasing the volume of trade exchange between the two countries about 30% annually.

During that period, Turkey has become the first trade partner of Syria, occupying its projects in the country ranked first.

Official figures in Syria show that the trade exchange between the two countries reach the amount of 2.5 billion USD by 2010, including about 1.6 billion USD which is Turkey’s exports to Syria.

Adding to that, the entrance of the low prices Chinese goods to the Syrian Markets witch add more weights on local Syrian laboratories craft workshops that produce similar goods, whom becoming exposed to severe crisis as a result of the intensity of competition and the difficulty of marketing & steadfastness in the market due to higher operating costs & the lack of support they receive from the Syrian government in order to give them some balance to secure their facilities productivity level to encourage competitive of the domestic product over imported product.

Add to that the emergence of cases of monopoly markets and fields of work & projects for specific businessmen whom close to the government, increasing cases of corruption, that greater the frustration among many in the country, especially those who were directly affected by the Syrian government’s policies.

Shortly after 2006 July war in Lebanon, Qatar provide substantial financial assistance for the reconstruction of southern Lebanon with Al-Jazeera News channel walk in the footsteps of the Qatari leadership to cover events always appear position defender and glorious victories of the Lebanese resistance & Hezbollah against Israel & talk about Syria & its leadership with showing highest levels of respect & admiration, simply to show things in best condition.

During the years of that period also Turkey took the advantage of its good diplomatic relations with Israel, mediated to revive peace negotiations between Israel & Syria, with number of secret & open negotiation sessions between the Syrian and Israeli delegates under Turkish mediation.

After Israel’s war on Gazza 2008, Turkey has to play the role of defender of the Palestinians & supporter of the Gaza Strip with its steadfastness in the face of Israeli aggression which got Turkey to frozen its relations with Israel to condemn the aggression. Turkish anger at Israel reached the peak when the public quarrel at 2009 Davos submit that took place between the then Turkish Prime Minister Recep Tayyip Erdogan, the Israeli late President Shimon Peres, where Erdogan’s direct public criticism of Peres & the Israeli government, protesting also of the unfairness of the time period granted to him to talk like President Peres which led him to criticize the hoster of the meeting session & the Israeli president, then he pulled out of the meeting & left the seminar session, only the Arab League Secretary General Amr Moussa, who He was sitting near to Erdogan, stand only to shake Erdogan hand during his withdrawal to express his appreciation for the position that Erdogan took & then he just sit back as if nothing had happened!

the Arab League Secretary General Amr Moussa then completes the seminar session when the Turkish leader withdrew denouncing the practices of Israel with the Palestinian Arabs.

Who is the Arab between these two in this case?

After this theatrical performance, Erdogan’s popularity dramatically increased among the Arab & Islamic world, with Arabs starts to call him & give him various descriptions & glorification labels & titles, the official Syrian media has begun to launch titles like the Ottoman Fair Sultan & the Ottoman Caliphate got up again to feast lost glory of this nation!

Arab demonstrations began in many Arab countries, such as Damascus, Palestinian cities, Amman, Cairo wrapping out around the headquarters of the Turkish diplomatic missions & embassies to deliver messages of love & thanks for the Erdogan noble & heroic stances!

All of these events culminating flotilla incident of «the Mavi Marmara» to break the siege on Gaza, which was launched from Turkey.

Israel confronted them violently, causing casualties of a number of activists who were on board the ship.
In general, and away from the emotions with a little careful consideration it will be revealed to us that all that was apparently the beginning of something.

A Beginning of a plan what or rather a scenario that has been prepared & written professionally to be a prelude to hell that is coming to the region.